by The Irish Flotilla

The Rossport Solidarity Camp kayak crew has done it again - now recruiting: get your arse to Mayo! 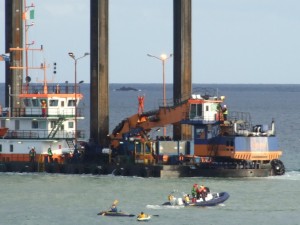 Shell: "Do you have no jobs to go to?"
Community: "This is our occupation!"

For the second time in three days a Shell dredger has been boarded and occupied by a Shell to Sea protester. As a result all the ships working in the bay have ceased work and returned to harbour. Reports confirm that work has been abandoned due to the action of the protesters!

A group of 11 kayakers set out at 5:30am on Friday, meeting instant resistance on the water from Shell security boats and safety boats. After avoiding the Shell private security boats that were attempting to capsize the kayaks, one protester managed to board the dredger Rezende Bol owned by Van Oord, who is subcontracted by Shell to do the dredging. This vessel along with another and multiple support and security boats were digging a trench in the seabed in preparation for the gas pipe-laying ship Solitaire. Work in the bay has been continuous 24 hours a day since Monday evening only stopping due to the previous dredger occupation by Shell to Sea protesters which lasted 10 hours. During the attempts to board the dredger several protesters were able to climb onto the side of the vessel. Excessive force was used to prevent them from boarding; one protester had his thumb bent backwards by a security guard and later was taken to the hospital where tests revealed damaged ligaments. Another protester who got on board the ship was violently pushed from the deck by two security guards injuring his back, and fell over six feet from the deck into the water. Shell security were kicking and stamping fingers of protesters on the near side of the vessel, all the while one protester managed to board the ship on the other side and climb up onto the same crane his friends had previously occupied just three days earlier.

The kayak support team prepared for similar shifts as Tuesday, anticipating a long-term occupation. Four kayakers remained on the water to keep an eye on the protester while the rest went in to regain energy. The reaction of the security and safety boats was very hostile, attempting to capsize kayaks and separate people from each other. The driver of the Galltee (Shells private security boat) repeated his threat to sink kayaks, driving extremely aggressively with no regard for the safety of the kayakers.

After the dredgers were towed away, the Garda arrived and boarded the ship in addition to the Shell security already on the ship. They threatened the protester on the crane arm with forced physical removal. Fearing for his own safety the protester jumped from the dredger arm onto the deck and dived into the water. The two supporting kayakers who were still in the water were arrested despite their efforts to comply with the Gardais instructions. In the water the crane protester managed to avoid capture by the Gardai and Shell security and get to the shore where he scaled a cliff to evade capture. His whereabouts are now unknown but he is safe and well!

Shell claimed that they stopped working in the bay due to a swell but sources at Ballyglass pier confirmed that Van Oord, the subcontractor running the dredgers were unwilling to work with ongoing protest activity and the excessive use of force by the IRMS (Integrated Risk Management Services) .

by Ray - Cork Shell to Sea

My congratulations once again for carrying out a marvellous action, and for doing so with bravery and tenacity. If we can keep this up all summer long then victory over Shell and the return of our oil & gas resources to our control might be nearer at hand. Perhaps Van Oord are nervous about the S2S protests? Contact details for the corporation are posted on another indymedia.ie thread comment, which I've appended to this comment for ease of navigation.

You folks are awesome! We are rootin' for you and will join you soon! Love, solidarity and support for your courage and commitment.

Trific - hats off to the pirates! Hasta la vista, compadres!

Many of these photos show the dangerous driving of the security and 'safety boats,' and it is quite clear that they were not concerned for the safety of the kayakers

Kayakers lined up ready to board the dredger

Kayakers on the side, while the ninja stands on the crane

IRMS security and Belcross 'safety' boats struggle to keep us away from dredgers.

While a person was standing on top of a dredging crane, stopping it from work, Van Oord allowed the vessel to be towed - one of many highly dangerous safety violations comitted today.

The dredger is being towed away by another vessel whilst protestor stands on digger.

A view of shell's huge fleet that had invaded broadhaven bay in preparation for the Solitaire - Chased out by a group of activists in inflatable kayaks.

The empty bay after the Shell subcontractors (Van Oord) pulled out.

I can't praise you young people enough. The audacity and bravery of you all will go down in the annals of Irish history.
A special thank you to our british compatriots for your help and kindness to persecuted Irish nieghbours .
THE ONGOING THUGERY OF THE GARDAI AND THEIR FASCIST MERCENERY FRIENDS WILL BE RECOCNISED AT SOME STAGE FOR WHAT IT IS = "TREASON".
The more lies the Gardai tell the less they will be believed by the public.
Shell have earned everlasting contempt by the people of rossport and eventually Ireland.

Very brave, determined action. Proud of you except for the whining.

Sorry, but "ship boarding" implies willingness to engage in a very rough game. ONCE aboard and engaged in some non-violent activity like the crane occupation your intentions have to be taken into account. But unless your "rules of engagement" for ship boarding over there are very different from here, while still in the process of boarding they probably can go by what a "reasonable person" might be entitled to assume about the possible intentions of unknown boarders.

For that reason didn't strike me as "excessive" at all. You weren't reporting people jabbed with boat hooks, having hands over the rail crushed by belaying pins, or being blown off a high deck into the sea by high pressure fire hoses - all things I would consider as still being within the realm of "normal measures to repel boarders". But perhaps your "rules" are very different?

global call for direct action in support with community in peru

As ever, S2S and Rossport: you rock, thanks,

just in case you havent heard about another community in similar situation, in far DEADLIER circumstances: 25+ were assisinated yesterday morning in peru, while engaging in 56th day of direct action blocade in bagua, peru. there has been a global call out for occupations in front of all peruvian embassies and other acts of support.

please support, watch muerte en sion and crude impact (found at link below) - their struggle is our struggle

solidarity to rossport and peru from BCN,

Massacre of Indigineous Amazonians in Peru - 25 dead and counting
http://www.indymedia.ie/article/92604

The activists' willingness to engage in 'rough play' does not excuse the captains & sailors ignoring their safety. ...beautiful work, folks!

Have sent off letter by email as requested but have attached the extract from the Oral Hearing about the danger of the pipe. Have asked Van Oord to cease all sea work until land issue is resolved otherwise the company is abetting Shell putting a human incinerator on land. Totally wrong in itself. Might be useful to attach relevant materials to your letter to Van Oord. Thanks for making it easy to send the letter.

Here is a video of a protestor being pushed off the dredger Rezende Bol by IRMS security personnel. The protestor hit protruding metal on his way down and has severe bruising on his back. Another protestor had his thumb bent back by the same security guard.

cant get much better than that lads but more sails are needed kenny borrowed harneys skirt its massive just the trick::::::::::::

where the hell is Greenpeace? someone needs to replace your kayaks with zodiacs

Rossport to be discussed on pat kenny show today

Not sure what time, tune in, phone in, text in
http://www.rte.ie/radio1/todaywithpatkenny/

He didn't complain to the police...WHAT are they supposed to investigate?

It seems to me,and to a lot of other people, that the people who are spinning a lot of lies are NOT the police.

I didn't hear the programme but if that chap was not asked why he's company employs/employed facist nazi paramilitaries from Eastern Europe and elsewhere in Mayo, then the whole thing was simply a Shell PR con job.

Question for Krusty and Impartial

We're observing this issue as best we can from the U.S. and are wondering: You seem disturbed by the ideas, values and actions of people who post on this site and you imply that they don't allow for other views. I must ask: In the Irish mainstream media, are the dissenting opinions--meaning those against the Corrib gas line--being fairly portrayed and given a voice on programs such as the Pat Kenny and Paul Williams shows that we're reading about here?

There's a useful map of all the exploration concessions off the coast from the Department of Communications, Energy & Natural Resources at the link below.

It's a UK AIM-registered company who got involved in Ireland after they recruited survivors from Enterprise Oil, which discovered the Corrib gas field and was then gobbled up by Shell. Although the Frontier Exploration Licence (FEL 1/06) was acquired by Serica in 2006, they had no money to do anything with it till they negotiated a 50% spit with German energy giant RWE in 2008, who have stumped up the money for the exploration - they were actually looking for gas (but no doubt they'll settle for oil).

The last oil discovery was 1981 by Phillips petroleum in partnership with Tony O'Reilly's Atlantic Resources vehicle. The O'Reilly's interests are now headed by Tony Jr. (Dad's still the major shareholder, natch) under the Providence name (see map for exploration areas).

As for the other players off the West coast, aside from Shell, ENI (Italian), Statoil (Norwegian), the other companies in the field are Island Oil & Gas which is a small AIM-registered Irish company (also licenced to explore the Slyne Basin, where Serica have found the oil). Not sure who the major shareholders are behind that one, but it'd be interesting to find out, at this stage.

Direct action is the only effective way to go. Meet force with force!

Video: The legend of dredger boy

in late June I interviewed the guy who got on the dredger on the cliffs by the camp and got him to tell the story of that day. An edited version of that is now on youtube which includes a number of the still pictures from this thread and facts about the scale of the state mobilisation

Related Link: http://anarchism.pageabode.com/andrewnflood/video-rossport-legend-dredgerboy-solitaire
http://www.indymedia.ie/article/92596
Indymedia Ireland is a media collective. We are independent volunteer citizen journalists producing and distributing the authentic voices of the people. Indymedia Ireland is an open news project where anyone can post their own news, comment, videos or photos about Ireland or related matters.