Seomra Spraoi: We got us some space! 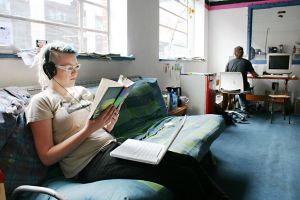 Having a relaxing read in Seomra Spraoi

As Seomra Spraoi prepares for the official launch of its big new social centre off Capel St in Dublin this weekend, we look at how far the project has come since the collective formed three years ago.

"So, in a year or two will someone be able to come to Dublin and make a documentary about an autonomous social centre here? Or will fundraiser gigs, political meetings and workshops always have to take place in Teachers Clubs or the upstairs rooms of pubs? ... Will there be somewhere indoors to go after street parties?"

These were the opening lines of the first Indymedia article published by or about the Seomra Spraoi collective, on December 1st, 2004. The collective had been formed just a few weeks before, with the aim of creating a space in Dublin to emulate the autonomous social centres of other European cities. The article was written to publicise Seomra Spraoi's first event, a screening of films about European social centres, followed by a social at the Nicholas of Myra parish hall off Francis Street. The headline was "Give us some space!" and the article included such chin-stroking lines as: "Many questions have to be answered on the long road to establishing a social centre in Dublin."


Well, almost three years later, the questions posed in the first paragraph can be answered with a confident, satisfied, air-punching, shouted-from-the-rooftops: YES, WE HAVE A SOCIAL CENTRE! And yes it's used for benefit gigs and political meetings. And yes folks went there after a Critical Mass bike ride recently. And they were given some lovely food.

It's also being used for arts/crafts workshops, screen-printing, banner-making and bike workshops. Entertainment includes a weekly movie night on Wednesdays (on a 10-foot by 20-foot screen), a contemporary storytelling night (http://www.indymedia.ie/article/84004) about once a month and regular gigs and socials. Last Saturday (September 15th) saw Spraoi For All hold the centre's first all-ages gig (http://www.myspace.com/spraoiforall).

The centre has three computers with broadband, as well as wireless broadband throughout the building; table tennis and pool tables; a library and a zine archive; a free-shop; a kitchen and an office. Oh yes, and two toilets. All of these facilities are free (though donations are welcome) and the entertainments are generally by 'suggested donation'. The vegan meal served every Sunday afternoon at Ormond Quay will make a welcome return this Sunday.

The "long road" wasn't as long as expected. After spells in a small room in Abbey St and a bigger room on Ormond Quay, Seomra Spraoi now occupies two floors of a building on Mary's Abbey, on the Luas line just off Capel St. It has a really big venue room, two further sizeable rooms and about five smaller rooms. It's big, it's bright and it's a bustling mix of political and non-political activity. On a typical weeknight you might find three campaign groups meeting in separate rooms, another group making a banner in another room, the newly-formed Table Tennis collective playing poker on the pool table, and one of Seomra's working groups meeting in the "office".

Since taking up residence at Mary's Abbey at the start of July, the project has moved into an exciting new phase. Lots of new faces have appeared; weekly meetings of the collective consistently boast between 20 and 25 people; six working groups also meet regularly to make it all happen. This is also the first of Seomra Spraoi's homes which has had regular opening hours, though these are still short of what we aspire to. You can drop in between 1pm and 10pm on Thursday, Saturday and Sunday, and between 5pm and 10pm on the other four evenings of the week.

Volunteers work a 'welcomers' rota, so that during all of these hours, there is someone in the Seomra who can welcome you, show you around, tell you about the place and make you a cup of tea (or rather point you to the kettle... it's all about DIY after all). Our weekly meetings are on Thursdays at 7.30pm and are open.

The December 2004 screening mentioned above was the premiere of a series of short films about autonomous social centres across Europe. It's safe to say that those who got the collective started in 2004 did not envisage that in less than three years Dublin would have a social centre bigger and busier than those featured in the films.

Another achievement is the project's openness, accountability and democracy - something the collective strove for from day one. Derek, who has spent time in social centres in Britain, Germany and Spain, reckons Seomra Spraoi need no longer look to the continent for inspiration. "I remember the first Seomra leaflet said the centre would be 'a model of participatory democracy', which sounds lofty, but compared to centres I've been at in Europe, Seomra Spraoi has far more people actually involved in the running of the place, and in the decision-making."

"I'm also struck here by the involvement of plenty of non-activist types. It's not a cultural ghetto, which places abroad often are. Rather than being just a hang-out for an activist community, it seems to me a place that's creating a new type of community."

One of those "non-activist types" is Naomi, an artist who has got involved more recently. "It's very welcoming and non-clique-y," she says. "You don't feel like you have to be an activist or totally political to be involved. Also, the political ethos of the project is very simple to understand. There was an obvious demand for a place like this, for music, art and other entertainment, as well as for the needs of campaign groups and that."

There is an ongoing discussion about how expressly political Seomra Spraoi is or should be, a discussion that this article does not intend to get stuck into. But the mere fact of creating and maintaining a self-managed, self-funded, non-commercial space in the heart of this most consumerist of cities, a space in which everyone relates to each others as equals, is a political act in itself.

If Seomra Spraoi is an experiment in social organisation, then its results so far are encouraging. Fuck yeah!

To find out more about Seomra Spraoi's history, aims, principles and structure and about how to get involved, come along to the centre this Sunday at 4pm for a short talk/slideshow/discussion about the project. Then at 5.30pm it's Three Minutes of Infamy, which will see each of about 18 of the groups that use the centre giving their own talk/slideshows in under three minutes each.

The space is open all weekend for people to drop in and drink tea and look around any time from 12 midday onwards.

7pm: Contemporary Storytelling: You are invited to find out what Irish storytelling is, was and what it might be.

5.30pm: Three Minutes of Infamy: the groups that use the centre will give 3-minute talks/slideshows about their groups.
http://www.indymedia.ie/article/84277

Give us some space (first article about Seomra Spraoi, December 2004):
http://www.indymedia.ie/article/67739

The front of the building

Window cleaning at the new space

http://www.indymedia.ie/article/84294
Indymedia Ireland is a media collective. We are independent volunteer citizen journalists producing and distributing the authentic voices of the people. Indymedia Ireland is an open news project where anyone can post their own news, comment, videos or photos about Ireland or related matters.