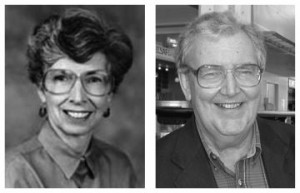 From CIA analysts to critics of US Middle East policy

In the week running up to the Shannon demonstration, Kathleen and Bill Christison, formerly senior analysts with the CIA and highly respected scourges of the present U.S. regime, will visit Ireland for the first time, on their way back from a fortnight in Israel-Palestine. In public talks around the country from October 21st-29th, they will give an informed update on the situation in Palestine, discuss what Kathleen has called the coming collapse of Zionism", and offer an expert view on U.S. support for Israel, and indeed on the U.S.s own imperial adventures

"Those who continue to support Israel, who make excuses for it as it descends into corruption, have lost their moral compass." - Kathleen Christison

In the following article from the newswire, a member of the Ireland Palestine Solidarity Campaign analyses the insights of these two experts into the situation in Israel-Palestine.

Kathleen Christison is a former CIA analyst and has worked on Middle East issues for 30 years. She is the author of the acclaimed books "Perceptions of Palestine" and "The Wound of Dispossession". Bill Christison was a senior official of the CIA. He served as a National Intelligence Officer for, at various times, Southeast Asia, South Asia and Africa. Subsequently, he served as Director of the CIA's Office of Regional and Political Analysis, an office overseeing 200 experts on all nations, regions, and global problems of the world.

In recent years, Bill and Kathleen have collaborated in seeking to expose the ongoing destruction of Palestine by Zionism, and how U.S. complicity in this project remains one of the root causes of global terrorism. They have also been scathing critics of the war on terror in general, particularly the imperial adventure into Iraq.

On Israel's recent war on Lebanon, where in the war's last 72 hours Israel carpet-bombed southern Lebanon with up to one million cluster bombs, the Christisons have said: "Israel's war can only be interpreted as a massive act of ethnic cleansing, to keep the region safe for Jewish dominion."
The Christisons are honest and penetrating commentators, who seek to get beyond the soft-left criticism that all would be alright with Israel if it could only behave a little less recklessly. For the Christisons, the heart of the problem, the ever-present cause of Israels recklessness, its disproportionality, remains Zionism, and its continuing exclusivist claim to an already inhabited land. As Kathleen wrote early on in the Lebanon war, while Israel was also decimating Gaza:

"A nation that mandates the primacy of one ethnicity or religion over all others will eventually become psychologically dysfunctional. Narcissistically obsessed with its own image, it must strive to maintain its racial superiority at all costs and will inevitably come to view any resistance to this imagined superiority as an existential threat. Indeed, any other people automatically becomes an existential threat simply by virtue of its own existence. As it seeks to protect itself against phantom threats, the racist state becomes increasingly paranoid, its society closed and insular, intellectually limited. Setbacks enrage it; humiliations madden it. The state lashes out in a crazed effort, lacking any sense of proportion, to reassure itself of its strength."

Recognising this as the reality of Israel, a reality which needs to be radically transformed if peace and justice are to prevail in Israel-Palestine, the Christisons see the holes in every peace plan whose goal is not peace with justice for both peoples, Israelis and Palestinians, but only peace and quiet for Israelis:

"What does peace mean, or real peace? The kind of peace that Sharon and most Israelis and Americans imagine is quite different from the kind of peace Palestinians envision. Does it come with justice, and for whom? Will it give the Palestinians freedom, or only give the Israelis the safety from which to continue oppressing Palestinians? Would "peace" be a peace of conquest for Israel but of subjugation for Palestinians -- like the peace imposed on American Indians?

More recently, the Christisons have weighed into the huge and important debate going on in America over the power of the pro-Israel lobby. Their experience both inside and out of the sytem, over a great many years, has given them insights into how totalising this influence has become in terms of directing American foreign policy. The self-evident simplicity with which they expose the lobby makes one wonder why there is any debate as to its influence at all:

It is all but impossible to imagine the U.S. supporting Israel's actions in the occupied Palestinian territories without pressure from the lobby. No conceivable U.S. national interest is served,¬ even in the United States' own myopic view,¬ by its support for Israel's harshly oppressive policy in the West Bank and Gaza, and furthermore this support is a dangerous liability. As Mearsheimer and Walt note, most foreign elites view the U.S. tolerance of Israeli repression as "morally obtuse and a handicap in the war on terrorism," and this tolerance is a major cause of terrorism against the U.S. and the West. The impetus for oppressing the Palestinians clearly comes and has always come from Israel, not the United States, and the impetus for supporting Israel and facilitating this oppression has come, very clearly and directly, from the lobby, which goes to great lengths to justify the occupation and to advocate on behalf of Israeli policies.

No doubt, particularly in the week of the Shannon demonstration, the Christisons will talk more generally about American adventures in the Middle East, and their audiences can certainly expect to learn much from these veteran analysts and activists. Keep an eye on the events listings on this site, and also on www.ipsc.ie, for full details of their talks. They will kick off in Dublin on Satruday 21st October at 3pm in the Teachers Club, and from there, over the next ten days, they will speak in Belfast, Derry, Sligo, Galway, Limerick and Cork. Hope to see you there.

On August 14, 2006, he anounced that he is a part of the 9/11 Truth Movement [1] by publishing an article called "Stop Belittling the Theories about September 11." His main points in the article revolve around two points: "ONE: An airliner almost certainly did not hit The Pentagon. Hard physical evidence supports this conclusion; among other things, the hole in the Pentagon was considerably smaller than an airliner would create. The building was thus presumably hit by something smaller, possibly a missile, or a drone or, less possibly, a smaller manned aircraft...TWO: The North and South Towers of the World Trade Center almost certainly did not collapse and fall to earth because hijacked aircraft hit them. A plane did not hit Building 7 of the Center, which also collapsed."

Sorry i didn't see where and when the talks are been given in the article. Sounds really interesting.

So could you put on the events board where and when its on??

by Bored with Screwballs

Christison is really making himself look silly. As is usual with the conspiracists they present NO evidence in their articles. It's all a tangle web of references to other articles that other conspiracists (unspecified) write in which they make grand assertions. In this case Christison assures us that there is "hard evidence" that the hole in the pentagon is too small. He presents this actual evidence nowhere in his article. He's moved from his area of expertise (intelligence analysis about people and groups) into unfounded speculation about physics. (How many times has Mr.Christison crashed 747's into the pentagon and observed the size of the hole?)

I can only assume that he wants to cash in on the 9/11 money train.

South Park does the '911 Truth Movement'

downloading now, may do a review at a later date....

Only an idiot would fall for US propaganda drive to minimise effect of the devastating attack on the Pentagon and Trade Centre. "We weren't tripped, that was really a very clever sumersault"

http://www.indymedia.ie/article/78924
Indymedia Ireland is a media collective. We are independent volunteer citizen journalists producing and distributing the authentic voices of the people. Indymedia Ireland is an open news project where anyone can post their own news, comment, videos or photos about Ireland or related matters.