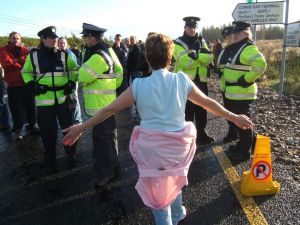 In the wake of Tuesdays dramatic events outside the gates of Shells proposed refinery site at Bellanaboy, campaigners were out in force Wednesday and Thursday undeterred by the heavy police presence and inclement weather. For the last two days over 200 local residents and Shell to Sea activists gathered in the semi darkness of the early mornings to voice their opposition to the Corrib gas project and to underline the fact that although work has temporarily recommenced on site, Shell to Sea resistance to this project will continue. In the face of deliberate attempts by Gardaí to opportunistically provoke and inflame the tempers of the protestors at this sensitive time, the nature of the last few days protests has been consciously peaceful, as usual, in an effort to diffuse the tension imported by An Garda Síochána.

The effective occupation of the Bellanaboy area by police since Tuesday morning continues. Hundreds of Gardaí who have been drafted into the small community to facilitate Shells work remain in the area and have maintained a strong presence outside the proposed refinery site since then. In the same way that Nigerias oil police violently suppress dissent to Shells corporate rape, the Gardaí are effectively Shells state provided private army protecting the global giant from the community which it is attempting to destroy. Public roads have been blocked and Garda checkpoints erected. Wednesday mornings protest witnessed a heavy police presence with luminous coated Gardaí lining the roadside. This morning police presence was more low-key with Gardaí waiting on standby in buses.

Despite deliberate provocation by the Gardaí, protesters have remained peaceful and refused to react to provocation. Gardaí have consistently targeted protesters who appear emotional or upset, pushing and shoving and putting their hands and cameras in peoples faces. Several people have reported excessive use of force apparently calculated to provoke a violent response. When removing Willie Corduffs son Liam from the sit down protest on Tuesday he held onto the gate, at which point a guard was overheard to say break his fingers, hell soon let go. Luckily his fingers were not broken. Philip McGrath was not so lucky as his thumb was dislocated by Gardaí. Mary Moran-Horan was roughly hauled by police, one on each limb, even after agreeing to come along with them. Her crime had been to be alone in the trailer washing tea-cups while the protest continued outside.

Wednesday mornings protest began at six am. In anticipation of roadblocks and in an effort to prevent being split up by Gardaí protesters massed one mile from the site gates. Approximately 200 campaigners gathered at the crossroads of the Shell highway haulage route and the Belmullet road accompanied by almost as many Gardaí, who set up a cordon to allow traffic past. Around 7am the assembled crowd began to walk towards the refinery site in the drizzle. Some began to pray. It became apparent that Gardaí behind the crowd were preventing some latecomers from joining the procession. We doubled back to the crossroads to meet the stragglers. By this stage several journalists were present. Willie Corduff delivered a rousing speech underlining the health and safety risks posed by Shell proposed misdevelopment, emphasising the determination of the community to defeat Shell and the state.

As 8am approached, police strengthened their ranks linking arms and forming a cordon around the crowd boxing us in. Shortly afterwards a convoy of cars, minibuses and jeeps of workers drove past the protest greeted by disapproving shouts. With Shells workers safely inside the gates of the site police relaxed the cordons. Campaigners began to march toward the refinery site flanked by two lines of Gardaí. En route to the site gates campaigners were again cordoned in by lines of police as three diggers passed on flatbed trucks.

Upon arrival at the refinery site campaigners assembled for photographs and interviews from journalists. Some of those gathered began to engage in debates with Gardaí, appealing to them to protect the community and not Shell.

On Thursday morning protesters gathered again at the Shell highway crossroads from 6:30am. Police presence was more low-key with fewer guards on the roadside. Additional Gardaí waited in mini-buses and vans nearby. Around 7:30 campaigners began to walk slowly toward the gates of the refinery site. Shortly before eight am a convoy of cars, jeeps and minibuses carrying Shell workers drove up behind the march. Gardaí ordered protesters to move aside and allow the vehicles past. The walk proceeded very slowly, with people on both sides of the road and the Shell convoy halted behind them. Gardaí again ordered campaigners to move aside which they refused to do. Marchers came to a standstill blocking the Shell convoy.

The order was given to push the crowd out of the way of the vehicles. Police formed a line and began to force protesters across the road, forming a crush. In response to the danger posed to some of the younger members of the march, a call went out to give ground to the Garda scrum. When the mass of people had been barged over to one side of the road, the police quickly ushered the Shell convoy past. Once the vehicles had gone into the site the march stopped outside of the gates at the police cordon where Willie Corduff and Jerry Cowley addressed the crowd. They assured the Gardaí that the resistance to this project would continue for as long as it takes and Willie called on people to come and keep coming to the gates of Bellanaboy for the next days, weeks, months and years, if necessary, to ensure that Shell abandon their plans for this onshore refinery and agree to build it at sea.

Willie Corduff addresses the crowd and the police.

Sgt. Dermot Butler MY28, Belmullet, pictured with two of the four Frontline observers.

http://www.indymedia.ie/article/78841
Indymedia Ireland is a media collective. We are independent volunteer citizen journalists producing and distributing the authentic voices of the people. Indymedia Ireland is an open news project where anyone can post their own news, comment, videos or photos about Ireland or related matters.