Erris is Now A Police State, Report Phoned in from Ballinaboy

But the mood amongst protestors is resilient and solidarity protests are being organised. 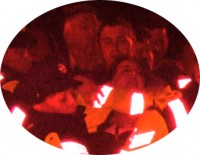 Late Monday saw a call out from Shell to Sea as rumours circulated that the state was ready to force the construction workers through the blockade at Ballinaboy. At 3.30 a.m. Tuesday morning there was a large amount of police activity with roadblocks being set up and then a woman is injured as the guards insist on forcing the entry of the security staff (who have been previously allowed onto the site without confrontation). At 6.30 a.m. the order goes out to 'Send in the Carrying Squad' and protestors are carried away from the blockade - with one man receiving a broken finger.

By 8 a.m. it was obvious that the decision had been made to re-take Ballinaboy for Shell on the same day that gas prices rise 30% and the Taoiseach is appearing in the Dail over his loans / gifts / whatever your having yourself. According to the guards they deployed 170 directly at Ballinaboy with riot police borught up from Cork on standby. But the mood amongst protestors is resilient and solidarity protests are being organised.

Monday:
Large police presence in Belmullet, they blocked off one small street to hold a private meeting with Shell. One local activist and Indy media contributor had his camera taken by the police during this event.Full details to follow.
At 11 pm: the Shell to Sea trailer picket H.Q. was in place at the refinery gates. From midnight some participants in Rossport Solidarity Camp joined the picket.

Tuesday:
3.30 am to 4.00 am: Police roadblocks were put up on both sides of the refinery site, and at gate 2 into it. The roadblocks were 1 km away from the main gates. People parked their cars at the gates and walked to the picket.
4.30 am: Carey plant hire is offloading crowd control barriers at the main gate.
4.50 am: Garda assembling barriers.
5.00 am: The Garda tow off peoples vehicles, citing a Traffic act.
5.05 am: Picket stands in front of gate, about 70 people and 170 cops, at some stage in time, or perhaps on one particular side of the 1 km cordon, the police began to prevent people from arriving at the picket.
5.15 am: Police are still moving cars, and have established a barrier cordon on both sides of the main gate.
5.20 am Security arrive - this is a normal shift change and security and a couple of other maintenance workers are normally allowed through the picket and onto the site. Nonetheless Garda insist on forcing security in, despite the fact the picket wasnt stopping them and never stops them, they aggressively push people out of the way and after a choking one woman is hospitalised. (ambulance arrives at 6.20 a.m.)
6.35 am: Cop with megaphone asks that old people, children and females move to the back of the picket as there may be confrontation. The people sit down and recite the rosary in Gaelic.
6.35 am - 7.05 am: Order send in the carrying squad is given. Four cops per person pick people up or drag them, into cordoned off pens on either side of the main gate. One man has his finger broken during this. The police tow away more cars. So at this stage, and this has continued up to now, people are being held, not under arrest, in police pens behind barriers on either side of the main gate.
7.45 am: John Egan, Shell pr and former BBC journalist in Nigeria, is standing beside the Nigerian memorial opposite the main gate observing the scene. Mini-buses and cars containing scab labour are driven into the site through the main gate.
8. 00 am: Large trucks arrive, flatbeds with diggers and also tippers carrying gravel.
8.30 am: Some police withdrawals.
8.45 am: 3 flatbeds leave the site after making delivery.
Full report and photos to follow, stay tuned to Indymedia.ie...

http://www.indymedia.ie/article/78777
Indymedia Ireland is a media collective. We are independent volunteer citizen journalists producing and distributing the authentic voices of the people. Indymedia Ireland is an open news project where anyone can post their own news, comment, videos or photos about Ireland or related matters.