Right to Abortion -- can the movement match the opposition? 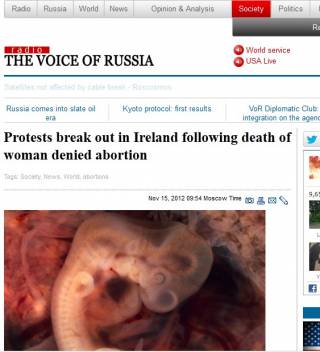 The anti-abortion movement was not cowed by the outcry over Savita's tragic death nor by the huge popular response marching in November. The Government plans legislation only to allow abortion when the woman's life is danger and the criteria for establishing that are not yet known. All opinion polls on the subject show a huge majority in favour of liberalisation of the laws -- a majority which is also rising over the years. The abortion rights movement has been publicly quiet for some time now while the opposition is loud and in public view. Can the movement for abortion rights summon the necessary militancy to achieve its objectives?

Related Links: The Death of Savita Halappanavar - Some Thoughts |
The struggle for abortion rights in Ireland - An anarchist perspective |
Catholic Church teachings and power kill woman in Ireland |
Choice Ireland Blog | Action on X facebook page |
Lobby your TDs on the immediate need for legislation to give effect to the X case |
Changing women's lives in Ireland | Vive La Vida. |
Abortion statistics England Wales Ireland 2011 | Ireland and abortion: the facts |
Equal right to life of the unborn is a nonsense - Vincent Browne Irish times |


The tragic death of Savita Halappanavar, dying in an Irish hospital during a miscarriage after being refused an abortion, shocked the nation. It might have been thought that the outcry then, followed by the protest demonstration of at least 20,000 in November in Dublin, along with other protests in Ireland and abroad, would have put the anti-abortion movement on the back foot. On the contrary, they have been on the offensive since.

Almost immediately afterwards, a religious orders woman was photographed outside the Bank of Ireland building in central Dublin with a placard saying: Must millions of unborn children be sacrificed to Satan for the death of one woman? Of course she represents the extreme edge of the anti-abortion movement and Catholic church dogma does not say  nor ever did  that aborted foetuses go to Satan. But she does represent the militancy of the anti-abortion movement.

On January 19th this year, the well-funded anti-abortion movement mobilised up to 25,000, according to the Gardaí, to attend a rally in Dublin. The regular anti-abortion propaganda stalls continue outside the GPO in Dublin and in fact seem to be stepping up their level of activity, with a giant placard across the road outside Clearys and leafletters there too, while passers-by are approached by young women seeking signatures for an anti-choice petition.

On the other hand, apart from some well-attended conferences in the wake of Savitas death and the setting up of some working groups, one hears little publicly from the pro-choice movement at the moment and their picket of the anti-abortion rally drew approximately 200. Apparently the activists, in the middle of work to set up the nationwide organisation Abortion Rights Campaign, were in two minds as to whether to picket it and only decided at the last minute to do so.

Recent opinion polls show that a spread of between 60% and 85% within the Irish state favour liberalising the abortion laws including, as a minimum, the right to abortion when the mothers life is in danger (www.ifpa.ie/Hot-Topics/Abortion/Public-Opinion). Surely the time is now to capitalise on such poll results and before the memory of Savitas tragic death fades too much? After all the X case controversy was in 1992 and what progress has been made since?

The most recent poll, that of the Irish Times/Ipsos MRBI, published findings this week which indicate an even more favourable climate for the right to abortion. Those who are opposed to it under any circumstances are at 12%, a drop of 6% from a similar poll in 1997. But the numbers of those in favour of abortion when the womans life is in danger have more than doubled to 84%. And those who favour abortion if the womans health is at risk have shot up from 14% in 1997 to 70% now. In addition, 79% were in favour of abortion when the foetus would not be capable of survival outside the womb and 78% in cases of rape or incest. Also of interest was the number who thought it should be permitted when the woman judged it to be in her own interest 37% overall (40% of women and 34% of men). (www.irishtimes.com/newspaper/ireland/2013/0211/1224329906498.html)

Despite the apparently favourable climate among the general population, the Government has declared plans only to bring legislation to allow abortion when the womans life is in danger and we have not been told what criteria will be used for that determination.

Campaigning for the right to choose abortion would need to be imaginative and might well need to include acts of civil disobedience in order to shake the main political parties out of their complacency  or at least inertia. Apparently the Abortion Rights Campaign intends to seek funding to help maintain itself and one cant help wondering whether the inevitable strings that come attached to funding might not restrain the campaign from necessary confrontations.

It would seem worthwhile also to bring the pro-choice battle to the Irish Republican movement, where the divisions are such that the issue is usually avoided. Some of the organisations have a policy of right to abortion where the life of the mother is endangered while others have steered away from the debate. Bringing the issue to the various organisations within the movement would strengthen the hands of those within who are in favour of liberalisation of the laws and would bring the pro-choice movement into engagement with a radical and often revolutionary constituency with which it usually fails to engage. In addition, the Republican movement traditionally draws strong support from the working class and that was one of the social groups in which the recent poll found lower support. One might argue that working class women have even greater need of access to abortion than their economically better-off sisters, with less easy access to abortion abroad and less access to childcare facilities also.

The Abortion Rights Campaign will fight for what is arguably at least as fundamental a gender equality right as was the vote for women, the right to control their own reproduction, and along the way win any improvements it can, such as the right to abortion when the womans life is in danger. That is very purpose of the internal organisational work in which its activists are currently engaged. Their ultimate purpose is to repeal the 8th Amendment to an Bunreacht, the Constitution of the Irish state, as well as to provide access to free, safe and legal abortion for all in Ireland. (www.facebook.com/abortionrightscampaign?fref=ts )

Meanwhile, it seems dangerous to leave the field of battle for hearts and minds on the street to the anti-abortion movement. Surely the pro-choice movement can run its own information stalls in central Dublin and elsewhere, collect its own signatures and perhaps even picket the anti-abortionists? The anti-choice people have marched out to do battle in a sustained campaign against any right to abortion at all. Hopefully the pro-choice movement will meet them with at least the same militancy and determination.

Related Link: http://www.irishtimes.com/newspaper/ireland/2013/0211/1224329906498.html
http://www.indymedia.ie/article/103283
Indymedia Ireland is a media collective. We are independent volunteer citizen journalists producing and distributing the authentic voices of the people. Indymedia Ireland is an open news project where anyone can post their own news, comment, videos or photos about Ireland or related matters.