OccupyIreland network is giving hope where previously there was none. 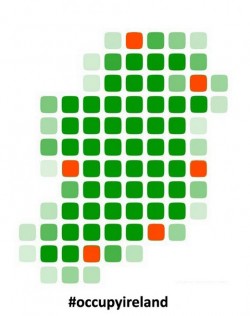 The Occupy movement has grown steadily in the past 4 weeks in Ireland. It is part of the global Occupy movement. As to what it is about is best summed up by the OccupyGalway statement:

Occupy Galway is part of the international movement against austerity measures imposed on ordinary people around the world. We are all part of the 99% who, so far, have been subject to economic inequality and social injustice from the 1% who control the world's resources. We, the 99% demand:
1 - The removal of the IMF and ECB from all Irish financial affairs;
2 - That the national debt imposed on Irish people from the bank bailouts be lifted;
3 - The return of Irish resources (gas, oil, forestry) to the people of Ireland;
4 - Real particpatory democracy.

THIS IS NOT A RECESSION, IT'S A ROBBERY!!!

The OccupyIreland has come about as a result of the OccupyWallStreet movement and this in turn was inspired by the massive Square Occupations that took place in city squares in cities all over Spain this summer and these in turn were inspired by the occupation of Tahir Square in Cario by millions of Egyptians who had lived under a brutal dictatorship for the past 30 years.

While the Egyptians removed the face of the system, Mubarack; they still have to remove the system itself which is the military corporate kleptocracy that still dominates all aspects of Eygptian economic life.

We in the colonial war-mongering West are only waking upto the fact that now the IMF has arrived vulture like to our own shores they are merely doing what they have done for decades in the rest of the world. And that is largely to plunder and destory it and channel all the resources to the 1% at the top.

As the World has now reached the limits to growth in terms of resources, there is less to go around. And for the rich and powerful 1% to maintain their piece of the cake which is no longer growing they have launched a new Class War. This started at least a decade or more ago but now that the global financial crisis has hit with full force, it is becoming more evident to even those who traditionally took no interest in global politics.

The new Class War unlike the old where industrialists fought against their workers, in this new guise, it is the financial parasitic layer who
don't even produce anything that are sucking the life out of humanity itself. Indeed a cancer has afflicted the globe and people are waking up to it.

The penny is also beginning to drop that this financial crisis is less a crisis and more a case of just one big giant robbery of the people and everything they have fought for and achieved over the past 150 years. The real crisis is whether the 99% can defeat the 1% or whether the 1% will impose neo-fuedalism on the 99%.

This is not a military fight because the powerful have all the firepower and resources at their disposal. This is the type of fight they want
and will try and engineer. The fight is in fact a fight to educate the people everywhere and get them to wake up and realize what is happening
and to recognise that only collectively can the power of the 99% be realized so they have to work together otherwise as is the case now, through divide and conquer and distraction, we are ruled and fooled. We have to understand how the system is structured and how it defines the rules of the game and change those rules in our favour. One of these rules relates to money itself and is neatly summed up in this quote from Mike Ruppert:


In this podcast 'Recovering economist' Richard Douthwaite, author of Growth Illusion, Short Circuit and The Ecology of Money, explains exactly how the private banking, debt-based monetary system -- the basis of all national currency systems -- leads to the destructive and desperate need for economic growth. The money system has demands at suicidal odds with the planet's finite resources. The mechanics of the money system are so simple it's almost infuriating. And yet so underappreciated.
Podcast here:

or can be found here: http://www.radio4all.net/index.php/program/21580


We the 99% are the people who in fact run the entire system every day. We do all the working, building, fixing, teaching, educating, policing, fighting and creating.


And so the OccupyIreland movement is growing. Today (Sun Nov 6th), OccupyDameStreet is going 4 weeks!.

http://www.indymedia.ie/article/100863
Indymedia Ireland is a media collective. We are independent volunteer citizen journalists producing and distributing the authentic voices of the people. Indymedia Ireland is an open news project where anyone can post their own news, comment, videos or photos about Ireland or related matters.