Ongoing protests in Dublin in solidarity with the Egyptian people

When it comes to torture, the CIA's man in Cairo; Omar Suleiman is "not squeamish, by the way" (former US Ambassador to Egypt, Edward Walker) 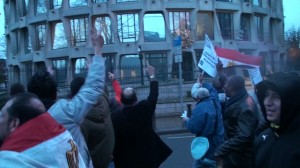 Egypt's on Fire: The winds for democratic change are strongly blowing in that country to dislodge US/Israeli backed traitor Hosni Mubarak and his Obama picked replacement, Omar Suleiman (also, "Israel's favourite Egyptian", Robert Fisk). Yesterday afternoon in Dublin, Egyptians, Arabs, internationals and Irish people of conscience assembled outside the Egyptian Embassy in Clyde Road, Ballsbridge to give the ambassador and all who care to listen a strong message that Mubarak and Suleiman will no longer be endured or tolerated and both have to go and be replaced with true democracy. Judging from the shuttered and closed blinds of the Embassy windows, denial held sway and the blind eye and deaf ear was being turned to the trumpeting elephant inside.?

With vice-president Omar Suleiman warning that the massive protests in Egypt for democratic change are "very dangerous" the likihood of savage repression is clear in the light of his past history: Lisa Hajjar in a Al Jazeera article addresses this; In the mid-1990s, Suleiman worked closely with the Clinton administration in devising and implementing its rendition program and at least one person extraordinarily rendered by the CIA to Egypt  Egyptian-born Australian citizen Mamdouh Habib  was reportedly tortured by Suleiman himself. In Egypt, as Habib recounts in his memoir, My Story: The Tale of a Terrorist Who Wasnt, he was repeatedly subjected to electric shocks, immersed in water up to his nostrils and beaten. His fingers were broken and he was hung from metal hooks. At one point, his interrogator slapped him so hard that his blindfold was dislodged, revealing the identity of his tormentor: Suleiman. Frustrated that Habib was not providing useful information or confessing to involvement in terrorism, Suleiman ordered a guard to murder a shackled prisoner in front of Habib, which he did with a vicious karate kick. Under the Bush administration, in the context of "the global war on terror," Egypt figured large as a torture destination of choice, as did Suleiman as Egypts torturer-in-chief.

To boot, Soleiman is of the view that his fellow Arabs and Muslims in Gaza should "go hungry but not starve" and collaborated closely with Israel to achieve this along with its efforts to isolate and destroy Hamas - speaking on a daily basis to the Tel Aviv government via a secret "hotline" to Cairo according to Wikileaks released US diplomatic cables.

Clearly, the peoples revolution in Egypt is in serious danger of being snuffed out by this monster; Washington's and Tel Aviv's man in Cairo.?

Caption: Dublin protest in solidarity with the Egyptian people 8-02-2011

http://www.indymedia.ie/article/98870
Indymedia Ireland is a media collective. We are independent volunteer citizen journalists producing and distributing the authentic voices of the people. Indymedia Ireland is an open news project where anyone can post their own news, comment, videos or photos about Ireland or related matters.