How are we to handle police intelligence with care? 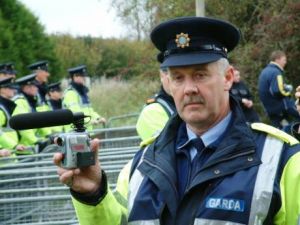 Down with this sort of thing!

Thanks to the publication of a British police intelligence "spotter card" issued to rank & file coppers for a climate change protest in 2007 this week by a British newspaper, many people regardless of whether they are activists in the UK or Ireland or indeed elsewhere in the EU are wondering about their constitutional and statutory rights in the face of the European wide creation of intelligence databases by police forces. Whereas those whose images appeared without prior consent in this week's British media may have recourse to legal action and a bit of chatter, Irish political activists, protesters & ordinary citizens thus far enjoy no public recognition of the existence of such databases in Ireland nor it would appear have any mechanism to ensure that their details if not guilty of any criminal offence are removed from the intelligence files of the Garda Siochana.

Related Link:
Original Article from The Guardian: Doth I Protest Too Much?

Ireland as no doubt few of us need reminding is unique in many ways amongst her European peers of either full sovreign statehood or the more ephemeral category of nation. There are as many examples of our differences as our similarities which might readily present themselves in an easy conversation between the whole range of Irish citizens, newcomer migrants or vital cash-spending tourists as may be promptly gleaned from; perusing a potted history of the island, a Bord Fáilte brochure, the wish lists of our fringe nationalists or the complaints of our dedicated alternative left.

However, seldom (do I wager) does such easy conversation highlight the differences of the mechanisms and practise of what we might take for granted as being in common with our European peers' statehoods. I refer of course to our peculiar habits of disenfranchising non-resident Irish citizens and not allowing them a vote in any election, our quaint and old-fashioned habit of not counting ballot boxes on the same day as votes in elections or referenda are cast & of course the extraordinary unsupervised privilege afforded our security services. For none can deny that the Irish intelligence services are answerable alone to the command structures of the Garda Siochana who alone in consultation with the minister of Justice out-source information gathering, translation, interpretation and monitoring to foreign institutions & that alone amongst the EU states there is no publically named or appointed head of intelligence services answerable to parliament in session or even committees set up for the purpose, be they in camara or open to all.

We Irish, may excel ourselves and indulge in more official tribunals than any other EU state to the delight of lawyers and frustration of the public and obfuscation of the truth, but our real and cutting difference is that neither our elected representatives including opposition or the executive appointed by the Dail to govern us count on a formal & transparent mechanism to provide oversight of intelligence.

The news article published in this week's Guardian which used as an illustration a "police intelligence spotter card" reportedly dropped over three years ago has to some extent provoked proper concern at the creation of "Big Brother" files. The secret lapel cameras and mobile car lenses of yesteryear coupled with the two way mirrors of brothels in discreet and affluent London addresses which collated intelligence on KGB suspects and assets of Bolshevikism have now it seems given way to the very easy to spot digital camera held aloft by plod.

The news however, was not new. IMC UK had reported at the time of the climate camp three years ago that a police intelligence handbook and spotter card had been found presumedly dropped by plod during the to & fro of that memorable protest event. The Guardian which has in the last fortnight mobilised its readers to apply pressure to the Daily Mail for its homophobic columnists piece on the late Boyzone member Mr Gately had of course turned to selling its newspaper by both covering the BNP appearance on the BBC flagship program Question Time and one presumes also assisting in the mobilisation of anti-fascist protesters at the studios in London. Following on from such noble shepherding of both readership and pitching at a target audience, the newspaper of the British left has now in support of a decent enough news story published photographs of protesters.

It is important to note that a story which could have been dealt with in one day has been spun out for several days (to sell copy) & thus far there has been no published vindication of the inclusion of the images of protesters which illustrated the original report. Indeed the Guardian itself has changed the online presentation of the article accompanying the illustration three times since. http://www.indymedia.ie/article/94553

Police Surveillance is not as none of us need reminding a solely British or British state matter. We have many times read articles and reports on this website concerning the gathering of police intelligence http://www.indymedia.ie/article/81214 & to what should be of even greater concern, it was on this website that an individual standing next to a private security contractor gathering intelligence on Shell protesters was identified as a member of an international neoNazi organisation.

As any long term reader of any Indymedia node across the globe will know, anonymity has always been guaranteed for writers, users & even those who chose are accepted to assist in the maintenance and editing of indymedia sites. The principle of anonymity is indeed the fourth of the global principles of unity of the independent media centre network c/f http://iosaf.baywords.com/global-principles-of-unity-of...work/ http://docs.indymedia.org/view/Global/PrinciplesOfUnity

Over the years it has become common for those who upload images of protesters or activists who have not given their consent to appear in alternative media news or reports to black out, smudge or protect the identification of those in the picture.

Of course sometimes articles published on this site as other nodes and platforms of alternative media and the sites of the campaigns who struggle for workers rights, environmentalism, human rights, migration issues, national determination issues, gender sexuality issues, animal rights issues, education issues (& our whole range of concerns) have found it proper and correct to illustrate or publish the names of individuals who work contrary to our common agenda.

If any of us have had cause to wonder or comment in these last days at the startling (& in my opinion un-neccesarily illustrated evidence) of British police intelligence databases and worry about the obvious evidence that such databases exist in Ireland as well as throughout Europe - then I would suggest they move to articulating a campaign which informs Irish civil society and thus pressures the Oireachtas to correct one of our key differences to our European peers.

We need a named & accountable head of intelligence and secret security services who is answerable to the Oireachtas through both Dail & Seanad committees with the findings of same made available to the public.

We also need a clear and proper procedure made available (or if already available elucidated publically) for individuals to remove their private details from any database held by the state which has no justification deriving from criminal convictions.

http://www.indymedia.ie/article/94564?search_text=iosaf
Indymedia Ireland is a media collective. We are independent volunteer citizen journalists producing and distributing the authentic voices of the people. Indymedia Ireland is an open news project where anyone can post their own news, comment, videos or photos about Ireland or related matters.