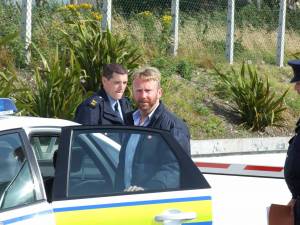 Niall with Garda Hugh Egan MY101

Shell to Sea campaigners Maura Harrington and Niall Harnett were sentenced to four and eight months in jail respectively at Bellmulet district court today. Both protesters have been convicted for taking action as part of a campaign of peaceful civil disobedience against the ill-fated Corrib Gas Project. Maura was given her four month sentence under Section 8 of the Public Order Act; 'failing to comply with the directions of a Garda'. The sentence was handed down in relation to an incident that occurred duing a protest at Shell's 'landfall' compound gate on 30th August 2008. Niall was sentenced to eight months in relation to two separate incidents. He was given a four month sentence under Section 8 of the Public order act, and another four months under Section 2, for the supposed assault of a Garda.

Related Links from Indymedia.ie:
A weekend in Erris at the national Shell to Sea meeting | Shell's Lackey's in the Media Out in Force Again | Message to an Bord Snip Nua. Resolve the Recession. Tax Shell! | Reports that Pat the Chief's boat was sunk last night | Massacre of Indigineous Amazonians in Peru - 25 dead and counting | The Pirates of Broadhaven Defeat Shells Armada | Prison van carrying Maura into Montjoy blockaded for 20 minutes by Dublin S2S | Shell security attack Willie Corduff after illegal Glengad compound dismantled | Scuffles At Mountjoy As Maura Harrington Is Jailed |


A protest was organised by Dublin Shell to Sea group for Thursday 30th July outside Mountjoy prison where Maura was taken after sentencing on Thursday morning.

Maura had driven her car to the gate of the compound which is the site where the high pressure gas pipeline is to come ashore. She then refused to move her car in one of several acts of peaceful civil disobedience that Maura has engaged in. This is the third time this year that Maura Harrington, retired local school principal, has been jailed for peacefully protesting against the Corrib Gas project.

The alleged assault for which Niall was convicted occured at the compound fence and eye witness acounts and video footage shows Niall attempting to aid another protester who is being violently assaulted by a Garda. Niall, who is on his way to Catlerea Prison after sentencing this afternoon said:

I have been jailed for my opposition and civil disobedience to Shell and their facilitators in the Irish State, and for my part in a brilliant protest which will continue and will grow. They will not get away with the destruction of the community, the environment and the giveaway of Irish natural resources. My motives are pure, and this sentence will have served a purpose if it exposes the lengths the State will go in their complicity in the rip-off of Irelands natural resources.

Both defendents were forced to choose between signing restrictive bonds to keep the peace or lengthy jail terms. The bonds would have placed limits on and prevented each of them from exercising their democratic rights to freedom to protest and freedom of movement. Under such bonds they would have been forbidden from attending any protest and excluded from the areas around any Shell sites.

Shell to Sea spokesperson Terence Conway said: Certain prominent protesters appear to have been targeted in an attempt to crush resistance in the area. These jail sentences represent the lastest examples of a sustained campaign by the state, in conjunction with Shell, to criminalise and intimidate the local community and their supporters in order to implement their project at any cost. Maura and Niall are courageous campaigners against the destruction of the environment, the threat to health and safety and the giveaway of Ireland's natural resources. 

http://www.indymedia.ie/article/93365
Indymedia Ireland is a media collective. We are independent volunteer citizen journalists producing and distributing the authentic voices of the people. Indymedia Ireland is an open news project where anyone can post their own news, comment, videos or photos about Ireland or related matters.