Scuffles At Mountjoy As Maura Harrington Is Jailed 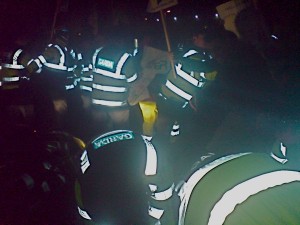 This evening (Wed 11th March), after the news of the 30 day sentence imposed on 55 year old Shell to Sea protester Maura Harrington filtered through, supporters converged on the gates of Mountjoy prison. By the time the van carrying Maura came into view over 30 supporters were waiting at the prison gates, matched by a similar number of Gardai.

Latest Stories About This:

There had already been brief scuffles earlier in the evening when a Gardai van drove up to the gates and was blocked in case this was a ruse to sneak Maura in. This time it was known Maura was in the van and most of those present blocked the road. Gardai waded into the crowd shoving people out of the way until they had managed to force the van through the protesters and into the prison beyond.

Apologies for the quality of the images, all I had with me was a camera phone

http://www.indymedia.ie/article/91489
Indymedia Ireland is a media collective. We are independent volunteer citizen journalists producing and distributing the authentic voices of the people. Indymedia Ireland is an open news project where anyone can post their own news, comment, videos or photos about Ireland or related matters.