The Emperor Has No Clothes! - Off to Belfast to Confront a Butt Naked Bush! 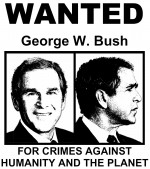 Since George W came to Belfast last time (03) over one million Iraqis, mostly women and children (Lancet Report) have been slain. Most of the U.S. troops doing the slaying have passed through Shannon Airport, Ireland, to get to their victims.. 4,000 of their number have returned in body bags, 20,000 with serious injuries (amputations, loss of sanity etc) they will never recover from and another 20,000 evacuated with injuries they should recover from. Thousands of veterans have suicided on return..

Living at the centre of empire - any empire - is generally relatively cosey. Keep ya head down and your mouth shut and you'll generally have a nice day. It can be kind of liberal and tolerant in the centre while on the fringes of empire the reality is fascism pure and simple You can say anything you want in the safety valve soundproof room of the arts in London , New York and Dublin (see the journo hack war cheer leaders and Irish war supporting politicians swaying to Leonard Cohen's denunciation of U.S. warmaking last Friday night for example)...try dissent on the imperial fringe and they even kill artists there ..........and students and church folks and trade unionists and the list is endless.......

Ireland - north and south, has been fast tracked to the centre of empire. The deal is if we keep our mouths shut, our heads down, we can reap from the upward mobility within the U.S. empire. The imperial troops will only stop over at Shannon, they will wait until they get to Baghdad to do the raping, killing, torturing and home wrecking. The arms companies will produce their hi tech shite in Derry, it will be dropped on other people in other places.

In the Roman empire they had an annual ritual where everyone would "burn incense for Ceaser" to recognise the emperor's dominion. For the first three centuries Christians refused to do this, or serve in the Roman military, - for this we were criminalised. Not because we worshiped a different God. The Romans were quite flexible in conscripting God and Gods from defeated regions of Empire. We were criminal because we refused to take life - the image of God - in service empire.

So what are we asked to do as the Emperor comes to Belfast. The defeated dissidents, now ensconsed, are asked to offer hospitality, the rest of us are asked to maintain a defeated, if not diignified, silence.

Since George W came to Belfast last time (03) over one million Iraqis, mostly women and children (Lancet Report) have been slain. Most of the U.S. troops doing the slaying have passed through Shannon Airport, Ireland, to get to their victims.. 4,000 of their number have returned in body bags, 20,000 with serious injuries (amputations, loss of sanity etc) they will never recover from and another 20,000 evacuated with injuries they should recover from. Thousands of veterans have suicided on return.

Last time Bush came to Belfast there was tension in the air. We created it nonviolently on the streets http://www.indymedia.ie/article/60059 ....five years into this war, the war has no popular support and the visible opposition has evaporated from view. The opposition in Ireland to the war is massive and passive expressed clearly in the unanimous acquittals of the disabling and disarming
PItstop Ploughshares www.peaceontrial.com
and the recent raytheon 9 www.raytheon9.org

It is important that people hit the streets in Belfast on Monday...downtown, Stormont, where they least expect it, wherever, whenever to confront the emperor to tell him and anyone in earshot that he has no clothes of credibility, that we don't believe him or his war. To break the consensus of silence on behalf of people being butchered is a powerful and worthy thing.

Today the British government attempts to remove free speech from their people in London http://www.indymedia.org.uk/en/2008/06/400898.html so the emperor can have an easy ride down the last bloodsoaked lap of his Presidency. Long after Bush joins Blair, Howard and that Spanish dude in retirement - the wars they kickstarted will still be claiming victims on the fringe of empire. The question will remain will it claim our spirit and our silence at the centre? All that is asked of us in Belfast on Monday is our silence and sedation - as Bush gets on with the killing, raytheon gets on with the profiteering and our local politicians get on with the collaboration.

Good luck, and respect, to anyone taking to the streets.

http://www.indymedia.ie/article/87990?search_text=raytheon%209
Indymedia Ireland is a media collective. We are independent volunteer citizen journalists producing and distributing the authentic voices of the people. Indymedia Ireland is an open news project where anyone can post their own news, comment, videos or photos about Ireland or related matters.