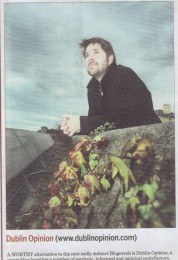 Over the last few years, blogs and blogging have started to permeate the mainstream in Ireland. Features on bloggers and blogging have started to appear with increasing frequency in weekend newspapers. However, in comparison to the US, where blogs have become an integral part of political organising, blogs are very much still seen as marginal by the Irish political establishment.

Left wing political blogs have until recently been particularly thin on the ground. However, this has started to change, with the emergence of a number of increasingly popular blogs written from an explicitly left-wing point of view. Last month, some of these bloggers came together to establish the Irish Left Review, as an online magazine to help further disseminate left wing views in Ireland. This article presents an interview with Donagh Brennan of dublinopinion.com,one of the founders and current editor of Irish Left Review, about blogging and the origins of this project.

Q: When did you first start blogging and why?

Just over two years ago. It was mainly to stop fuming quietly while reading stuff online and to order my thoughts and give them some focus. I also started up a group blog and although it was only mainly me at the beginning, the aim was to have a place where me and some of my mates could sharpen our ideas, and do so in a more elegant and sartorial style than we were capable of down the pub. One friend I hoped to rope in is living in France and a blog seemed like the perfect way to get us all doing something together again.

Q: Are there many Irish blogs that have left-wing outlooks?

There are a few at this stage, but the majority of blogs don't focus on politics specifically, so sometimes its hard to tell which way individual bloggers lean politically. However, I'd say there's about 10 or so Irish Blogs with a left-wing outlook. Perhaps, though, these are just the Irish blogs with a left-wing outlook that I read. There are now hundreds of Irish blogs, so surely there is more than 10 lefty ones out there.

Q: Why did you set up Irish Left Review?

Well, first of all it was it was a group initiative, although I did give it an initial push. The motivation came from Gerry O'Quigley, who was supported by Michael Taft when he suggested that there "seemed to be a coalescing of certain Left-wing bloggers around a consensual point of view" and that this group should form an online alliance of some sort, similar to one suggested in an American context by Mark Schmitt at TPMCafe.

The consensual point of view was that Left wing parties (basically Labour, Sinn Fein and the Greens, being the largest Left wing or 'progressive' parliamentary parties) should act together and work towards a situation where they are no longer the poor relations of Irish politics, expected only to be the support act in a right-wing lead coalition. The suggestion being that they can work together to become a significant political block in their own right.

Q: What sort of stuff can we expect it to publish?

Because each of the original group have very active blogs we decided that it would be an opportunity to expand on what we would normally be able to write - considering that most blog posts are written very quickly and as such are reactive. So, we are publishing longer pieces, both essays and articles, which will provide the opportunity to do research and flesh out arguments, as well as writing columns, which are similar in length to blog posts. These essays, articles and columns will focus on the ways and means that an alliance between Irish left wing parties and independents can be formed. So the focus will be on potential policy issues that could be used to form a common platform, as well as political issues which would involve a discussion of the strategies required to ameliorate all the traditional positions that have prevented a proper alliance from happening before now. Our focus is on eroding the support for the right-wing hegemony in Ireland, so that involves lampooning their blatantly false verbiage whenever we can, which, in short means we'll also try to have a laugh along the way.

Q: What sort of relationship do you have with the existing parties and groups on the left?

Personally none, although I've been active and interested in politics for a long time. Like many people in my position I have friends who are members of political parties, in my case Labour and The Socialist Party, but I've never been a member. In a sense, I'm the outsider in the group - the one who looks in, but doesn't get actively involved. When taking the initiative on this I felt it was time to stop being a spectator and to finally get involved with real politics, on the ground. My hope is that the magazine, as well as being a resource for current activists on the Left, would also encourage other political gawkers to finally get their hands dirty. Irish politics is not going to change without the more active involvement of people like me. That said, many members of the original group currently are, or have been members of Irish Left-wing political parties and groups. These include The Workers Party, Labour, and Sinn Fein (no Greens yet). Almost all of them are active campaigners who write documents, post leaflets, canvass, stick up posters and sell newspapers at election time.

Q: What about publishing material produced by political groups?

We aren't interested in republishing a political groups' material for the sake of filling space or to refresh the content in the magazine. However, we are also aware that there are many political resources out there that could be useful and which perhaps haven't been given enough exposure. We are aware that Ireland, despite its more outward looking perspective these days, still tends to explore ideas that come from within the British Isles. Nothing wrong with that, but our hope is to connect our project up with other Left wing groups throughout Europe. Ireland is relatively unique in the fact that it has a pitifully small number of TDs who represent Social Democratic values. In all of the major EU countries Social Democratic parties have a much larger representation. So we plan to use material from various European Left wing think tanks and organizations to explore whether their ideas would work in an Irish context. So the short answer to the question about whether we would publish material produced by political groups is yes, but selectively.

Q: Do you have a closed pool of contributors, or can anybody submit articles? If so, how can people get involved?

In order to get this off the ground we stuck to those who originally came up with the idea, the guys from Cedar Lounge Revolution, Michael Taft of Notes on the Front, Alex Klemm, Cian O'Flaherty of Irish Election, Gerry O'Quigley, Hugh Green of Most Sincerely Folks and Conor and I of Dublin Opinion . However, coming up to the launch and since we've also co-opted contributions from other bloggers, including Stephanie Lord of Musin' and Confusin' and Seanachie of Pleasures of Underachievement. We're also contacting others who may be interested, so no it's not closed, although at the initial stages it was necessary to keep it small.

People can certainly get involved. As the format is a magazine, albeit an online one, the structure for contributing is pretty much the same as any magazine. I'm acting as editor, so I encourage any one who's interested in contributing to email me at dublinopinion AT gmail DOT com with their ideas for the piece and to put "ILR  Article Ideas" in the subject header.

This is to maintain quality, avoid repetition of material and to ensure that the articles going up can be coordinated more effectively. In the submission it would be great if people could briefly describe what it is they want to talk about and to suggest what research they'll be doing for the piece. Also, it would be useful to know when they think they would be able to submit the finished article. Often people are enthusiastic when they come up with an idea but find that they don't have the time to write it. Knowing when someone plans to have it completed will help me to know when I can chase them for it. We don't have fixed deadlines, as there it is not structured on a monthly or bi-monthly issue basis. However, some sort of deadline has to be agreed with the writer or it would never get done.

Q: What are your goals for the site?

The goals of the site are to achieve the objective stated in the Manifesto, which can be found in the About page. They are to contest conservatism on a broad front  whether it is on issues of governance, the economy, social reform, culture or history; to encourage the Irish Left to join with its allies throughout Europe to present itself to the Irish people as a viable governing force in its own right and to provide an open space to which we invite progressives from all the traditions on this island  socialist, Green, republican, trade unionist, liberals and egalitarians  to contribute the new ideas and strategies that will unite us against the domination of the Right, make new friends and propel us to future victories.


Q: Do you think blogs and other internet projects such as irish left review will ever be able to really challenge the ideological hegemony of the right, with their giant corporate media infrastructure?

Well, that's a big question. There is no doubt that a small group of people working part-time on this won't be able to give large media organizations a run for their money - in the short term - there is no comparison in terms of resources. However, it is interesting how these organizations are reacting to the web. Basically they are doing as little as possible to engage with it at a time when online audiences for news and current affairs, for example, is growing. Our objective was never to compete directly with giant corporate media and to try and supplant their message with our own. However, there will be a directed attempt to develop an alternative and coherent debate so that people who are engaged in Left politics in Ireland will have the resources (the facts, arguments, ideas, strategies) to counteract the ideological hegemony. At the moment, because of the dominance of a right-wing ideology in Ireland there is an acceptance that if you're going to debate political matters within the media that you have to do so within the parameters set down by the dominant ideology.

We are going to try and show that you don't have to accept the terms of the debate as set down by the corporate ideologues. Because the public forum so far has been provided by large media organizations it has been easy for them to set the agenda. However, with the Web, you can develop other public platforms, which we hope, through the structure of a magazine, we can utilized to create another debate and that in time this will be significant and authoritative enough to challenge the cozy consensus we see regurgitated in our media everyday.

http://www.indymedia.ie/article/86836
Indymedia Ireland is a media collective. We are independent volunteer citizen journalists producing and distributing the authentic voices of the people. Indymedia Ireland is an open news project where anyone can post their own news, comment, videos or photos about Ireland or related matters.