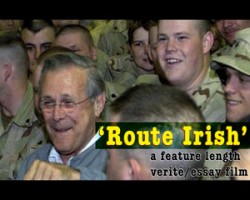 Rummy thanks Ireland for 'Route Irish'

'Route Irish', a feature length verité/essay film on the campaign(s) against Irish facilitation of the US/UK Invasion of Iraq will be screened for the first time publicly in Dublin on Wednesday 7th November in Seomra Spraoi.

This film is firstly a vérite documentation of the emergence between 2002 and 2004 of a broad popular opposition to the US military use of Shannon Airport in the buildup to, invasion of, and occupation of Iraq.

It follows a loose network of politicians, activist groups and individuals through the story of the rise, fracturing and sudden decline and disappearance of this movement and retraces the way in which their combined efforts, energies and strategies served to effectively tear away the Irish States' veneer of neutrality and non-alignment in the post September 11th era of the 'War on Terror'.

Secondly it is a essayistic reflection asking, from the perspective of one Irish individual caught up in the cycle of protests here, why the international pre-war wave of opposition to the invasion of Iraq appeared so suddenly, peaked so quickly, and failed to sustain itself despite the fact that, in historical terms, all of the predictions of that movement (and worse) were proved right in the course of the ongoing US/UK occupation.

Thirdly it has, because of the progress of political events in Ireland, become a strange and surreal portrait of the Green Party pre their elevation to government.

It's production was made possible by the existence of a pretty comprehensive video archive of the period which was produced by a loose network of Indymedia Ireland related videographers, and which was collected over the course of the events by the editor of the film.

Making this kind of film without a budget would not be possible without the existence of a very strong copyleft ethos throughout the video activist community which has developed here in the last few years alongside the development of Indymedia Ireland and Revolt Video.

In the spirit of that ethos the editor, after this beta screening, will be making copies of the film without the voice-over commentary available to interested parties within the broad activist community which uses and contributes to the development of Revolt Video and Indymedia Ireland. It is hoped that those who disagree with the personal analysis/version of events put forward by 'Route Irish', or find it unsatisfactory, or want to improve it, will take it upon themselves to version* this slice of history.


The event will begin at 8pm.

Ciaron O'Reilly of the Pitstop Ploughshares will launch the film.

Pay what you can afford to the Seomra Spraoi project.

The screening will be followed by a discussion. The editor of the film, which was shot over a period of four years by a loose network of Irish video activists, will be there to shout at when it's over should you so choose.

Warning. This is not a happy clappy celebration film. It is a subjective essay on the events around Shannon Airport between 2002 and 2006.

After this initial screening the film will be distributed hopefully with the help of some of the audience through torrent networks and also through (the evil but efficient) google video.

A 'raw materials' package will be made available at cost for the use of any individuals or groups who wish to use the archive on which it relies to tell a different / thir own version of the story. For details - attend the screening or contact the editor at ecrudden (at) gmail.com.

Thanks in advance to seomra spraoi and revolt video for facilitating this screening.

http://www.indymedia.ie/article/84775
Indymedia Ireland is a media collective. We are independent volunteer citizen journalists producing and distributing the authentic voices of the people. Indymedia Ireland is an open news project where anyone can post their own news, comment, videos or photos about Ireland or related matters.