One arrested as Gardai and Shell trample community in Mayo 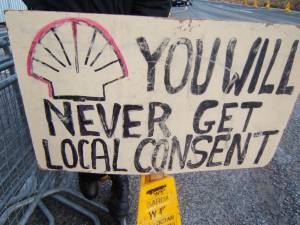 And never, go deo, will you win with your corporate way.

There is currently a stand-off between approximately 40 locals and 20 Gards and a bulldozer on the land of Paddy and Bridget McGrath -owners of a pub in Pullathomas.

From 17.00 today (11/06/07) there has been a stand-off between approximately 40 locals and 20 Gards and a bulldozer on the land of Paddy and Bridget McGrath -- owners of a pub in Pullathomas. They also own land down to the estuary near the proposed Shell pipeline where the authorities are attempting to gain access. There has been no mention by the authorities of compulsory acquisition or purchase orders nor have they asked permission to gain access to land. They have simply turned up claiming that they are attempting to build a car park (?!)- a superintendent is said to be on the way. Any local support would be helpful ASAP.

It seems that Rural Planning Services, the company Shell have contracted to find a new pipeline route, have tried to install a container on the bank of the estuary near the solidarity camp at Glengad. A large force of Gardaí have been used to push local people back. It is reported that some of those protesting are the land owners, whose permission had not been sought for the work.

At least one person has been arrested, handcuffed, and taken from the scene.

http://www.indymedia.ie/article/82967
Indymedia Ireland is a media collective. We are independent volunteer citizen journalists producing and distributing the authentic voices of the people. Indymedia Ireland is an open news project where anyone can post their own news, comment, videos or photos about Ireland or related matters.