Back On The Bins :::: Campaign Hits The Streets Again 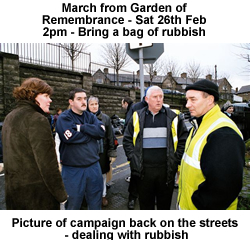 When the anti bin tax campaign went quiet after the Autumn / Winter of 2003, they were expected by the pundits to return after the local elections in June 2004. Despite a flurry of activity around the estimates the fact that the Council was biding its time meant the campaign focussed on the courts and the council chamber. All the bins were being collected and the courts at least were of some use - with a precedent set that threw the council into legal quandaries as it seemed to imply that 2 years bin tax (2001 / 2002) were invalid and people could claim it back.

Joan Collins, in this Audio interview gives her take on whats happening as the city campaign returns to the streets to deal with bags left behind. They're marching this Saturday at 2pm from the Garden of Remembrance and txt msgs are floating around encouraging bags and wheelie bins to be brought along for the spin. There have been protests around the country in Cork and the Newswire reports bizzare sightings of anti dumping helicopters in Kerry. The reality of dirtier towns, burning rubbish and the disappearing waiver for pensioners is becoming apparent.

http://www.indymedia.ie/article/68763
Indymedia Ireland is a media collective. We are independent volunteer citizen journalists producing and distributing the authentic voices of the people. Indymedia Ireland is an open news project where anyone can post their own news, comment, videos or photos about Ireland or related matters.