"We Are Hireable On Demand...Exploitable At Will And Fireable At A Whim" 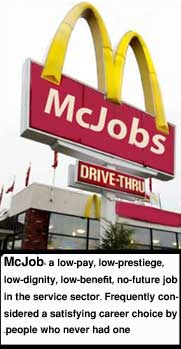 Hands up who remembers back in the day, at the height of hype on the IT economy, when every half witted career guidance counsellor in the country did their best to pilfer leaving cert students of their dreams by forcing them into dead end computer courses in preparation for a career in call centers? The mass media cheer-led us into a new millennium and we awaited the collapse of work as we knew it Jim, ready to lap it up in the leisure society, with dreams of flexible working from home wearing headsets and tapping keyboards. Then the repetitive drone of the dot com boom was suddenly slapped aside and the realization dawned that while Gates may have got his millions - millions of others were left with nothing but repetitive strain injury and flexiploitation. Its admirable the myriad of ways they make us swallow their bullshit. They repackage it every once and awhile in a never ceasing effort to make old lines of conflict and tensions once spotted, less obvious.

Related Links:
Class Struggle in the New Economy A Ballad Against Work
Prol Position, home of the Hotlines inquiry into resistance in call centres.
Slavery Calling
The Simon Jones Memorial Campaign a campaign against the casualisation of labour, named after a man killed in a 'workplace accident', due to casualisation and workfare.
Video games on the theme of precarity
Working in a Music Store Interview with a HMV worker.
Green Pepper interview with Chainworkers 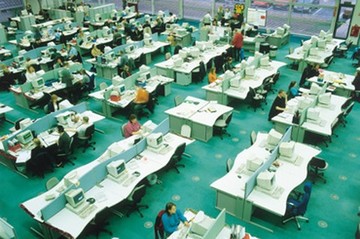 Douglas Coupland coined the achingly appropriate term McJob for the monotonous dead end short-term employment that so much of Generation X fell into and we now take for granted. He presented the McJob as a slacker lifestyle choice that facilitated an escape from the cage of traditional career choices allowing us to define ourselves as something other than our job descriptions thatd see us all going the Willy Loman way.
As a result he certainly fell for the worst excesses of post-modernity as a method taken on by power and capital to impose a frightening new method of work discipline and organization on us. This increasingly obvious face of work in advanced capitalist countries has had a number of different terms attached to it by arse-hole academics each vying for position to create the latest post-whatever the fuck trend in the ivory tower. While simultaneously turning themselves into supposed experts on the reality the rest of us live. The best term for the McJob phenomenon is the most obvious - precarity.

It is a system of employment, where locally we are mobilised to be on our toes constantly by short term contracts in one end of the service industry or other. There is also the purposeful undermining of traditional forms of workers organisation in how workplaces are organised and a de-teething of unions nationally by forcing them into bed with the bosses through social partnership. Globally it is a field where capitalism laps up technological innovations to disperse production throughout the globe. So Nike engage in the immaterial production of a brand, while someone else produces the actual product.
Politically, precarity manifests itself as social democracy retreats ever further up its own ass as the middle management of capitalism, in the face of a private sector itching to tear apart the security of the welfare state. Those that have entered the labour force in past few years are among the first generation since 1847 that doesnt have to piss off to England or the States to find work, but the first to wave farewell to a job for life, and instead suspiciously eye up insecurity, short term contracts, rent slavery and shite public services as privatisation is used to shift capital into private hands in case we get too uppity.

Employers use students* precariously preferring them to employees that may need stability or security. Usually finding work in the worst swamps of the service sector such as pubs, call centres or high street chains, open to abuse as seasonal workers and then fucked out. One student in a call centre was taken in, in kind of a draft for want of a better word, with seven or eight students and then there was one girl, like who was from Ballymunand shes like Well they never called me back  they must have forgot! It was clear that they called all the students back but they hadnt called her back.
One former HMV worker just out of UCD described how the team leader structure and the way the three floors in the building were divided created an air of division" which disrupted his attempts to start a union in pursuit of basic rights. There was 25 or 30 people laid off on Christmas Eve and I was the first to be informed of my laying off. They didnt like my attitude. The company exploited its brand image, so people really want to get a job there, people didnt want to jeopardise their job by raising objections. Theres a reward scheme or structure whereby people who adhere to company policy and wear the HMV logo with pride will be rewarded in the fact that theyll receive some façade of a promotion, be that team leader or in the case of seasonal workers, being kept on for a longer period.

A friend has experiences of being put through the Marks and Spencers Retail Academy. Forced to greet customers as part of a routine interview in a shameless attempt to squeeze unpaid labour out of him as the brash youthful face only to eager to help on the shop floor, struggling to hide the comedown from hell. Branding is production remember. There are more insidious bastards who use computerized personality tests - it may well be off the mark but thats not the point. All they want is to check if you go along with the rubbish where they tell you about your 'personality' without rolling your eyes to heaven. And this even before you start work. In one call centre training lasted about seven days, they go through all the products and are constantly just told about CC LTD**, CC LTDthen there was this stupid video that runs through all major events in Irish history and CC LTD is there beside ridiculous shit like Mary Robinson getting elected and then maybe something happens to CC LTD that year and thats thrown in as if it was an equally huge occasion in Irish history just bullshit like that. Real bullshit, basically the main training is to make you feel as if you are part of something, That corporate idea.
Taking up a path first beaten by WalMart, TK Maxx in Dublin refer to their staff as associates rather than workers or employees.

On one hand, management use bullshit training regimes and exercises to reduce start off wages, yet simultaneously use technology to de-skill workers in an effort to reduce their control over production. But as usual most real training comes from work colleagues. A call centre employee described how you finish making a call theres this thing where youve got 20 seconds to type up if you made a sale, to catalogue all the info. If you dont catalogue all the information in that twenty seconds you get fined, its a section of your bonus, once you close it another call comes in immediately.
The McDonalds mode of automating food processing defines the trend. Ironically, in the first major boom of call centers in Germany, there were 'scandals' of companies grabbing up to 50,000 DM (25,750 Euros) per newly created job and skilling up workers where a 40% turnover was considered normal. In an ideological climate that dismisses state intervention, this is a rather bizarre wealth redistribution to the corporations.

Most people one day bullshit a path out of shit jobs like HMV that subsidise some tosser of a landlord in Rathmines into something more grown up the overall rhythm of work doesnt really move an inch. If your not one of those creatine fuelled little shits on the 46A. Or if you cant scab a job off the aul lad of some chicken brained L and H type thats been bred from the cot to pounce around and lord over the rest of us with all the intellectual agility of a legless monkey. Get used to the idea that an arts degrees real value is as quality roach material to complement a life time of drudgery in jobs with a please deposit brain here slot at the front-door. Yet have you ever noticed how in convenience stores theres always more cameras trained on the staff than the punters?
Doing a McJob is like returning to school, idiots make you wear uniforms and use bull shit award schemes like gold stars on copy books after a spelling test to instill discipline and loyalty: "Theres a chart put up every day of how much youve sold the day before so that instills competition first of all, thats the main way. So every one can see where they are ranked, even though there are only ten people on a team. But in fairness my team seems to fail quite badly. Just as in school where authoritarianism is greeted with subversion on a level that can sometimes reach unbelievable planes of piss-taking there a hints of a similar pattern in call centers: The main thing every one that works in there talks about is how much we hate it. Im serious, maybe 60 or 70 of the time we have socialized on breaks and stuff we spent bitching about it...These jobs sap any energy out of you its the exact opposite of pressure if you know what I mean. Total monotony. Pressure is the wrong word to use, maybe it will get pressured, I dont know. We take the piss out of peoples names, we shout at each other on the phone, try to make other people laugh on the phone. It happens loads, it cuts off around two percent of the calls and then that person will never answer their phone to CC LTD again.

*This is one of the most notable things about the current state of the labor market. I couldnt find statistics through google on it however, but Im sure someone can post a link up here with some
** The real name of this company has been changed to protect the identity of the staff member.

The film Precarity will be screened in NUI Galway and UCD shortly as part of the New Antagonisms series of films and discussions.


http://www.indymedia.ie/article/68665
Indymedia Ireland is a media collective. We are independent volunteer citizen journalists producing and distributing the authentic voices of the people. Indymedia Ireland is an open news project where anyone can post their own news, comment, videos or photos about Ireland or related matters.