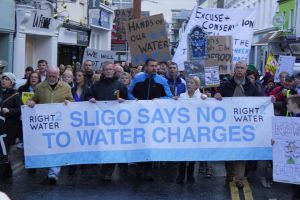 Sligo says No to Water Charges

Over 100 separate local demonstrations took place today (Sat Nov 1st) against the Water Charges and for the Right 2 Water. Organisers estimate conservatively that over 150,000 were out on the streets today to send a message to this government that they won't accept paying for water twice and having it privatised later.

People realize that all the false promises and allowances will eventually be dropped and the long term result will be that a privatised water company will prey on the people with massive hikes in charges and big fat bonuses for themselves.

There were protests from Cork & Kerry to Wexford to Dublin to Limerick to Galway to Sligo to Donegal to Cavan to Dundalk and all over the Midlands. There has never been anything like it perhaps since the foundation of the state. The people are truly fed up and are determined and will not be abused by the political technocrats of big Capital that is robbing every social gain our forebears fought hard to get over the past century.

For lots more pictures check each of the various campaign pages from around the country.

Statement from the Right2Water campaign:

Despite torrential rain, our expectations have been massively exceeded, with well over 150,000 people coming out in every neighbourhood, town and village to send a clear message to the Government: water is a human right, and we demand the abolition of domestic water charges.

Today showed the strength of public opposition to water charges in communities up and down the country. The time has come for the Government to accept the will of the people, abolish domestic water charges and return to the drawing board. Until they do, the Right2Water campaign will keep up the pressure.


Here's a roundup of some of the numbers for local protests around the country:

Ennis says no to water charges

Dundrum says no to water charges

in other news, after two weeks of politically motivated witch hunts and muck throwing by the government and their friends in the indo, out comes this latest poll....in the indo:

The people are waking up....

Ballina the forgten town among others perhaps

Re: Ballina the forgten town among others perhaps

If you have any pictures from Ballina, please post them here.

http://www.indymedia.ie/article/105100
Indymedia Ireland is a media collective. We are independent volunteer citizen journalists producing and distributing the authentic voices of the people. Indymedia Ireland is an open news project where anyone can post their own news, comment, videos or photos about Ireland or related matters.