The American Revolution is underway, #occupywallstreet takes it to the belly of the beast

This is the US Fall responding to the Arab Spring : 700+ arrested this morning on Brooklyn Bridge 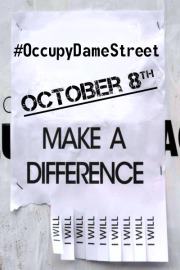 NEW YORK TIMES: Updated, 3:35 a.m. Sunday | In a tense showdown above the East River, the police arrested more than 700 demonstrators from the Occupy Wall Street protests who took to the roadway as they tried to cross the Brooklyn Bridge on Saturday afternoon. (After a 2 week corporate media blackout, #occupywallstreet direct action is now front page news)

It seems like in about a week or two's time, most of the western world will be occupied
Occupy Everywhere | Occupy Together | Occupy-Dublin | #OccupyDameStreet | occupy den haag | 1% network Ireland Indy: Occupy Dame Street - Oct 8th - Bring tent

It seems like in about a week or two's time, most of the western world will be occupied
Follow Occupy Wall Street Live on Livestream:

Cornell West speaking at the peoples assembly at #occupywallstreet day 11:


"There is a sweet spirit in this place. I hope you can feel the love and inspiration, of those sly stone called "everyday people" who take a stand with great courage and compassion because we oppose the greed of Wall street oligarchs and corporate plutocrats who squeeze the democratic juices out of this country and other places around the world. I am so blessed to be here, you got me spiritually breakdancing on the way here, cuz when you bring folk together, all colours, all cultures, all genders, all sexual orientation, the elite will tremble in their boots. And we will send a message that this is the US FALL responding to the Arab Spring, it is going to hit Chicago, Los Angelas, Phoenix Arizona, and A town itself, moving on to detroit, its gonna hit apalacha, hit the reservations with our red brothers and sisters, martin luther king will smile in the grave, saying were moving step by step to what he called a revolution, dont be afraid to say REVOLUTION. We wanna transfer of power from the oligarchs, to ordinary citizens, with the poor children of all colours, and the orphans and the widows, and the elderly, and the working folk, if we connect the prison industrial complex with the military industrial complex and the wall street oligarchy complex and the corporate media multiplex. I want to thank you, its a blessing to be a small part of this magnificant gathering, this is the general assembly consecrated by your witness and your body and your mind.


"This is literally an uprising of people who have had it. It has already started to spread across the country in other cities. It will continue to spread. ... It will be tens of thousands and hundreds of thousands of people ... Their work ahead is not as difficult as other movements in the past ... The majority of Americans are really upset at Wall Street ... So you have already got an army of Americans who are just waiting for somebody to do something, and something has started."

Arun Gupta: The Revolution Begins at Home, An Open Letter to Join the Wall Street Occupation:


What is occurring on Wall Street right now is truly remarkable. For over 10 days, in the sanctum of the great cathedral of global capitalism, the dispossessed have liberated territory from the financial overlords and their police army.

They have created a unique opportunity to shift the tides of history in the tradition of other great peaceful occupations from the sit-down strikes of the 1930s to the lunch-counter sit-ins of the 1960s to the democratic uprisings across the Arab world and Europe today.

While the Wall Street occupation is growing, it needs an all-out commitment from everyone who cheered the Egyptians in Tahrir Square, said We are all Wisconsin, and stood in solidarity with the Greeks and Spaniards. This is a movement for anyone who lacks a job, housing or healthcare, or thinks they have no future.


Princeton University professor Cornell West was speaking at #occupywallstreet day 11 peoples assembly. In the video, the load shouting method, repeating the speakers words clearly, is used becuase 2000 people had to listen and the NYPD forbid the use of loudhalers, soundsystems etc... Being interviewed by Amy Goodman on Democracy Now after spending time in the occupation, Cornell West stated:

So from the revolts in North Africa, what has been called the "Arab Spring", what jumped across the straights of Gibralter and spread throughout spain; the peaceful revolution dubbed the "15M" (May 15th was the first day of action)... Thankfully and finally Indignation has spread to the US... Good luck to all there, hopefully we will see this massive spark jump to all those places which are still not indignant and on the streets making change... Like Ireland

#OCCUPYWALLSTREET The American Revolution is underway

People of the US have Risen Up

Cornell West: you got me spiritually breakdancing, dont be afraid to say REVOLUTION

700+ arrested this morning on Brooklyn Bridge

Caption: Police Arrest More Than 700 #occupywallstreet Protesters on Brooklyn Bridge (We are Change)

http://www.indymedia.ie/article/100645
Indymedia Ireland is a media collective. We are independent volunteer citizen journalists producing and distributing the authentic voices of the people. Indymedia Ireland is an open news project where anyone can post their own news, comment, videos or photos about Ireland or related matters.