by Andrew - Shell to Sea 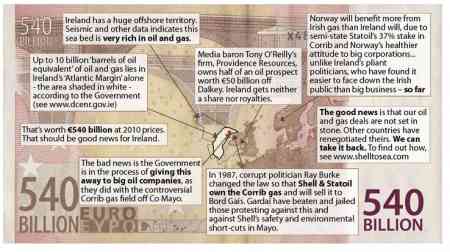 540 BILLION Euro - What Could the Country do with That?

Today members and supporters of Dublin Shell to Sea gathered the top of Grafton Street to distribute 540 billion commemorative bank notes to members of the public, symbolising the cost to the exchequer of the extraordinary giveaway of Irelands oil and gas reserves. This was part of a national Shell to Sea day that saw leafletting in 8 other towns and cities around Ireland as well as Dublin.

Dublin Shell to Sea spokesperson, Caoimhe Kerins explained that The general election campaign is being fought against the backdrop of the greatest economic crisis to face the people of this state since its foundation. Tens of billions of euro have been poured into private banks and the government is imposing savage public spending cuts. Yet voters have been told that there is no alternative to this austerity programme as the state lacks resources.

However, the governments own figures, published by the Department of Communications, Energy and Natural Resources, indicate that Irelands Atlantic Margin contains ten billion barrels of oil equivalent. The value of this substantial reserve is estimated to be in excess of 500 billion. Saturdays event has been organised to highlight the giveaway of our natural resources and to provide information to voters to ask prospective TDs.

In conclusion, Caoimhe Kerins said, To date the Shell to Sea campaign has saved the state some 10 billion as Shells plans to raid the Corrib gas field have been frustrated for almost a decade. Shell to Sea is calling on the incoming government to reverse the notorious 1987 Ray Burke deal that reduced the states 50 per cent share in its offshore oil and gas to zero and abolished royalties, effectively ceding control to private corporations. Proper management of our substantial oil and gas reserves would provide a long-term revenue stream for the state and substantial resources to invest in our public services.

The commemorative notes which mocked up to look like Euro bank notes contain information for voters in the forthcoming general election on the infamous Ray Burke deal, which saw the State handing over control of its oil and gas reserves to multinational oil corporations. On the back of the notes there is a short list of suggested questions that voters can put to general election candidates in relation to both the giveaway and the planning process for the Corrib gas field.

by shelver - shell to sea

We had a great response in Ballina, Westport and Castlebar too- a good few shops even took leaflets to stock and we were invited back into a pub in Westport for a coffee before heading home.

Great time to spread the word - alot of people are listening now.

During last week the Pat Kenny Show came from the Metropole in Cork. It was a difficult show as the news of the air disaster came within minutes of the start.

The show seemed to have chosen health as the main issue and it lasted almost 2 hours. It begs the question on how media chooses topics for public debates. Is the choice solely in the hands of the broadcaster? If so this is a kind of management of public discourse during this period. I would be looking for alternatives. The discusion centred on what seemed to me internal management issues rather than on national policy surely the proper domain for legislators. Are we getting the debates pitched at the right level of governance and can we distinguish policy from practice?

There is far too much debating time spent blaming one another. These precious moments should be spent stating party policy of the present and the future in short manageable bites. The role of the facilitator would be to point out the differences, look straight at the audience and state what the choice is. That would be a helpful contribution to the public.

Needless to say there was no mention about natural resources as a national issue and indeed the parties have not been addressed directly on the issue. Why not? If there is a rush to secure negotiation on our IMF package and leaders are ready to travel in pursuit of this, it should be a much more straightforward to seek the renegotiation of oil and gas deals on the assets which we own and are still in possession of? We need to see a balance sheet of what we own...and see how it squares with what is owed and which we are being forced to pay off.

At the end of the session came an opportunity to hand in person the Shell to Sea Questions to Miceal Martin. Simon Coveney, Dan Boyle, Paula Desmond and Chris O Leary.

P'raps, and this is pure guesswork, because Pat and the higher earners in RTE have a nice wad of Shell shares by their Killiney sea-shores. Given the direction of resource and commodity shares, as the serious moolah transfers from property to happier hunting-grounds, this would be their idea of 'smart economics'(rather than asking why the human resource of yet another generation are being dumped out the door.

Well they have to do SOMETHING with all that disposable income we lavish on them for sitting on their arses as we queue for a shrinking crumb, and watch our kids emigrate.

the parties and the gas?

Whats Sinn Féin's position on Corrib? Are they in favour of nationalising the energy etc? If so, will people perk up? and as for ULA? and others?

I don't know their position but at least Gerry Adams just mentioned the giveaway of Irish oil and gas on the 'leaders' debate on RTE. John Gormley of the Green Party then came back with the untruthful reply that Eamonn Ryan brought in royalties on oil and gas. He did bring in an increase in corporation tax on any profits the oil corporations might declare, after all their costs of set up and even the decommissioning of oil rigs, refineries etc is taken out before profit is declared so it's usually many years before any profit is declared...

Pat Kenny, Joe Duffy, Ryan tubridy etc are all Fianna Fail stooges. It is about time SHell2Sea realised that they will never get fair play from these leeches on the tax payer. They are very skilfull at holding debates and sneaking in their own biased views.
The election is being controlled by a dishonest Media.
Election candidates should be asked their views on why the Garda Ombudsman is vetoed by the minister for justice and DPP on Corrib issues?
why is Enda silent on the Corrib crimes?

wikileaks exposed the depth of the penetration of Nigeria's political structures by Shell's 'invisible hand of the market'. Placemen all through it.

They gift the freebies generously, like big pharma oiling the docs' prescription options. Maybe they call it ' the Free market ' cos they're free of all democratic constraint.

Guys where can i get my hands on these informative banknotes? as i would be willing to hand out hundreds before the elections!!

should link you up

Three times yesterday Miceal Martin floated the possibility that cabinet ministers might be appointed on their professional competence rather than through the electoral process. He deliberately mentioned energy and communications as ripe for the experiment. Think about it !! He did not mention Finance where the greatest weakness has lain and while we force our people out we give way to recruiting from other countries as in the case of the regulator as we boast from President down about the great educational and professional capacity of our own people. What a contradiction of that fact by people who pose as our solution solvers.

by AC - Shell to Sea

...and link to the actual blue "Special Edition" banknotes commemorating the Great Irish Oil and Gas Giveaway, issued especially for the grand occasion of the 2011 General Election in this our glorious Irish democracy... this is your share of the oil and gas... like your vote in the election, it's not worth the paper it's written on and like the vote it's all you're gonna get if you continue to behave yourself and don't wake up... but don't worry about that... just sit back and enjoy the artwork, enjoy the comedic political 'debate'...

by AC - Shell to Sea

Everyone on this website should wash their hair, shave their armpits and get out to work!!!! Skanky feckers how on earth do yee even have access to the internet from your field!! PS Shell to Sea suck and I HATE tree huggers!!!! C'mon Shell!!!! C'mon the Ros!!! Mayo is crap : )

http://www.indymedia.ie/article/98907
Indymedia Ireland is a media collective. We are independent volunteer citizen journalists producing and distributing the authentic voices of the people. Indymedia Ireland is an open news project where anyone can post their own news, comment, videos or photos about Ireland or related matters.