1% Network Find The Pot Of Gold On Shewsbury Road 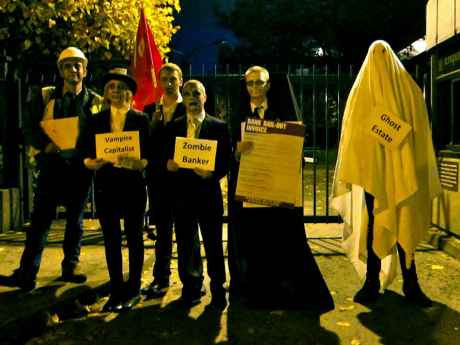 A larger than expected crowd turned out for last nights 1% Network Treasure Hunt around the exclusive Aylesbury and Shrewsbury roads in Dublin. In 2006 Shrewsbury Road was the 6th most expensive address in the entire world and it remains exclusively populated by the richest of the 1% who own 34% of the wealth in Ireland.

Over 50 people met up at the Head Quarters of Allied Irish Bank on Merrion road where we found the Special Branch and a van load of uniformed Gardai waiting for us. During the tour we would be joined by another 2-3 Garda cars but the only interaction was when the Sergeant in charge came over at the start to ask our capitalist vampire where we'd be heading. Merrion Road and around he was told and back across to the van he went. Unfortunately our photographer failed to capture the exchange.

AIB was the meet-up point because it was confirmed earlier in the month that the amount of loans it is transferring to NAMA is just over 23bn. Alongside this AIB is effectively being nationalised with the governments stake of AIB rising to over 90%. It's also just up the road from Hume House, bought for the equivalent of 195 million per acre in 2005 by Sean Dunne - one of the highest prices paid for real estate ever in the entire world.

Out first stop was the Four Seasons, a luxury hotel where the Luxury Pamper Escape package costs 570 a night but in terms of our Treasure Hunt the point was that the tax breaks given to the 20 1% investors who own it were worth around 32 million, money that under the Tiger could have gone to healthcare or education and which if claimed back now is an alternative to cutting social welfare or services. Multiply that by all the hotel projects and various other tax breaks and you have one hell of a pot of gold.

We then swung off the Merrion road onto Shrewsbury road, a very suitable venue for an after dark Halloween tour as its very badly lit and lined with big old mansions. We stopped first at Balhom No. 4 owned by Paul Coulson who sold the Irish Glass Bottle site for 412 million to Bernard McNamara and Derek Quinlan. Quinlan actually lived right next door at No 6. The sale of the site involved the closure of the plant and 375 workers losing their jobs despite a 17 week strike and an occupation of the site for several months in 2002. Ardagh, the company controlled by Coulson, was profit making at the time and now has annual sales in the region of 3 billion.

The next stop was No. 8, the home of Dermot Gleeson who stepped down as chairman of AIB in 2009 but only after getting the bank bailout agreed with the government. Gleeson was paid 475,000 in 2007 by AIB, at this stage they must think he was well worth it as that night of the bailout the state guaranteed the deposits, loans and obligations of the six Irish banks to the tune of some 400 billion. In keeping with the Halloween Trick or Treat tradition we left an invoice for the bank bailout for Mr. Gleeson.

Then it was down the length of the road with our ever growing Garda escort to No 21 or Belmont - the home of Denis OBrien, which he paid 35 million for back in 2006. When we reached the gate we found two very burly black leather jacket and glove clad gentlemen inside the locked gate who on being asked what they were doing informed us they were gardeners. It was an impressive devotion to Denis that must have had them out so late in the dark no doubt planting the spring daffodils.

OBrien himself was nowhere to be seen which wasa pity as we had prepared a tax bill for him which was duly handed across the gate to his 'gardeners'.

O'Brien is almost directly across the road from No 24, Walford, the mystery mansion. It was bought in 2005 for 58m, the highest price so far paid for any house on this road. The mystery buyer has been trying to get Planning Permission for 9 houses through the front company Matsack Nominees. It was only revealed in the Irish Times of 30 Sept 2010 that this buyer was Gayle Killilea, wife of developer Sean Dunne - an illustration of how difficult it can be to gauge the true wealth of individual members of the 1%.

Then it was around the corner onto the slightly less exclusive Ailesbury Road for our final stop at No 22, the home of developer Bernard McNamara whose house includes a cinema, ballroom and underground swimming pool. McNamara is a former two-term Fianna Fáil councillor, and as a developer continued his close connections with the party including hosting parties at the Fianna Fáil tent at the Galway Races. He was given the contracts for five public-private partnerships (PPPs) regeneration projects with Dublin City Council but when the property bubble collapsed McNamara simply walked away from those projects condemning hundreds of people to sub-standard accommodation.

We were there a couple of minutes when flood lights at the gate were turned on presumably so those inside could see what was going on as we delivered our final trick or treat, a box containing the broken dreams of those McNamara abandoned. With that it was off into the night and to our various Halloween parties in the parts of the city where the houses don't have a left and right driveway to choose from.

The 1% Network is going to continue its work of revealing the huge wealth divide that exists in Ireland between the 1% who own 34% of the wealth and the rest of us. As we have shown on this and the previous tour there is indeed a pot of gold held by the 1% that can be used to prevent cuts in health, education and other services.

A Zombie developer shows up

Box of broken dreams at McNamar's

http://www.indymedia.ie/article/98041
Indymedia Ireland is a media collective. We are independent volunteer citizen journalists producing and distributing the authentic voices of the people. Indymedia Ireland is an open news project where anyone can post their own news, comment, videos or photos about Ireland or related matters.