The Release & Homecoming of Pat 'The Chief' O'Donnell - Photo Essay

Selected photographs of the triumphant homecoming of a Hero and Friend! 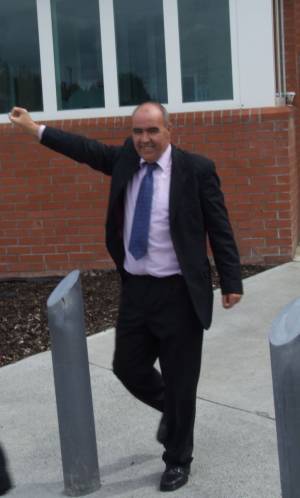 The Chief is free!!

Erris was abuzz with joy and merriment as one of her finest sons, Pat 'the Chief' O'Donnell was freed from Castlerea Prison yesterday after 158 days of Shell-decreed incarceration. He was met by an ecstatic group of well-wishers outside the prison and was piped off the prison precincts after speeches by himself, Maura Harrington, and a message of support from Luke 'Ming' Flanagan, Mayor of Roscommon County Council.

Pat then returned to his native Porturlin in a motorcade via Ballyhaunis, Claremorris, Castlebar, Foxford, Ballina, Killala and Ballycastle. In Castlebar and Ballina he was piped through the main streets to the appreciation of passers-by. At Glenamoy Cross, Pat left his car to enter the joyful embrace of his friends, neighbours and supporters who had waited several hours for his return. After half an hour there of being welcomed back, Pat and the motorcade made the final leg of the journey home to Porturlin, where the whole village was assembled round a roaring bonfire to welcome their valiant neighbour back to his home patch.

Today, Pat attended the Street Feast outside McGuire's in Pollatomish, and there he thanked the many friends and supporters who kept his spirits up while imprisoned, and the many friends he made while in prison, and reminded people to keep up the support for Niall Harnett, another prisoner of Shell now jailed for his 89th day. the well-attended Street Feast made a fitting end to a most joyful weekend in Erris.

Heading into the prison

Pat being embraced by his wife Mary

Pat speaking to his well-wishers outside Castlerea Prison

More photos from the joyful day.

Pat being chaired away from prison

Pat being piped away from Castlerea Prison

The prison is behind him now...

Pat O'Donnell and his family together in Castlerea

suffering for the truth

Like the Rossport 5 'The Chief' and Niall suffer for their desire to get to the truth. Government in Ireland (and most of the world) is no longer about truth, the constitution or serving the people, it is about serving corrupt interests of the elite and the corporations.

While people remain disunited and focus on individual or smaller issues such as animal cruelty, job losses, deportations etc. which are all symptomatic of a corrupt system we fail to address the root cause of all these issues - the complete failure of government as a system that is intended to serve and protect the people. Only a concerted effort by all concerned people will bring about a change at the highest level - ending the corrupt system so that the individual issues may be then dealt with.

The current format of piecemeal protest and resistance is akin to running around with a fly swatter while ignoring the stinking bucket of dung in the middle of the room that is causing the problem!

The Chief at Glenamoy Cross - back home to the warm embrace of those who know him best...

The message is clear!

The bonfire and crowd to welcome him home to Porturlin

A final selection of photos from the joyful weekend.

Dancing at the Street Feast today

Fabulous photos of Pat's release, thanks for sharing. I really loved the dancing ones in particular. Full support to all of you from your friends at Tara.

Absolutely deadly to see The Chief out
Spreading the word over here in the US
Solidarity all Shell to Sea!

Well done Pat, you're an absolute inspiration. I'm sorry I couldn't make it up to the celebrations when your seven months finally came to an end. I'm infuriated by the injustice done to you but also hopeful that with the help of people like you wrongs can (eventually) be made right.

And to anyone who hasn't yet seen 'The Pipe' documentary, make it a priority on your list of 'worthwhile, inspirational documentaries to watch'...it's just fantastic.

Solidarity and support being sent to Pat and all the Shell to Sea gang from Galway.

More info and the latest updates on the Shell to Sea campaign @: http;//shelltosea.com

Thank you for looking.

fantastic to see piccies of pat back where he belongs-
in the arms of his family and friends!! much love and respect to you pat.

And Now The final Days of ABP Oral Hearing

by Eamonn O'Coilea'in - Republic of Ireland

WE Can Change The Course Of History Here In Ireland, So on Friday Please Be There @ Broad Haven Hotel In Belmullet on The Final day; unless of course it goes on to next week. The people of Erris can really make changes, if it's put before the Board of Inspectors where they hear the true stories of the Future of IRELAND, Thank YOU All Who took the time to put Submissions to Explain their thoughts to the ABP , With any Irish Luck we can all live happy ever after, with out the knowledge that sheeeee wosh the gas is leaking, Godbless :SEA U THERE

Evil will not triumph here because of good men such as Pat. The is no cause more noble than to stand up for others,

Wishing Pat and the entire community the strength to continue this fight.

http://www.indymedia.ie/article/97236
Indymedia Ireland is a media collective. We are independent volunteer citizen journalists producing and distributing the authentic voices of the people. Indymedia Ireland is an open news project where anyone can post their own news, comment, videos or photos about Ireland or related matters.