by Fionuala Cregan - Global Call for Action Against Poverty 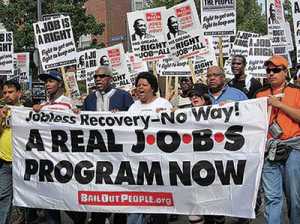 While a self selected group of world leaders congregate behind a sea of security and police controls in downtown Pittsburgh, up in the Hill District a different kind of movement is beginning to be built.

When the hotel doorman asks if we are sure we really want to go up to the Hill District, we know that we are going to the right place. It is here, in the African American neighbourhood known as the Hills that the real G20 Pittsburgh summit action is taking place. This action is not the flying visit of 22 world leaders to discuss the financial crisis behind closed doors and at a cost of $10 million in security. Nor is it the long lines of police, army, border control and private security who have taken over the streets, out numbering civilians in downtown Pittsburgh. No. The real action, the peoples' voices, the people power, the peoples' strategising is happening right here in the Monumental Baptist Church and the Tent City which has been constructed around it by the Bail Out the People Movement and groups of the unemployed and homeless. It is here that people, from all over the world, have come together to demand to be heard. They have come together to denounce what they see as the The Hill District Consensus Group is one of those people. A leader in the struggle for housing, jobs, recreation spaces for young people in the Hill district, he says that the language used by the G20 and the media in their coverage of it may be complex and inaccessible to many but to his community, it is quite simple. Elite groups such as the G20 are created to to remove all obstacles to profit. They come together, supported by multi national corporations, not just to make profit, but to maximise profit.

It is within this context that according to Joseph Stigltz, one of the speakers at the event, a culture has been created in which banks have become too big to fail and in which loss is socialised and gain is capitalised. In other words, it has become accepted that tax payers' money can be used to bail out banks and shareholders, that people all over the world will lose their jobs and their homes while the banks and corporations responsible for the crisis can continue as before. This, according to Stiglitz, has been reflected in the policies and discourse of the G20 leaders over the last year as they have met to discuss the financial crisis. What is needed first is a profound shift of discourse, he says while highlighting that is not a financial crisis but a systemic crisis of de-investment in people and in housing, health and food.

The next step, according to , is to Expand the Space. A self selected club of the leaders of richer economies can not make decisions for a world of globalised economies, where the actions taken by the more powerful economies have an affect all over the world. We all know by now that when rich folk come together what they do is cook up disaster, she says, We need an inclusive and participatory and democratically accountable G192, we need women around the table, we need sustainable solutions.

The lack of different voices within the G20 and the framing of the crisis as a purely financial one has, according to participants in the event, been clearly reflected in the outcomes of the summits. Outrage is expressed at the empowerment of deeply flawed financial insitutions such as the International Monetary Fund which was granted $1.3 trillion dollars at the London G20 Summit in April. Bhumika Muchhala from the Third World Network who had been speaking at the launch of the Social Watch 2009 report earlier that day said It is a truly horrifying that during the worst recession the world has faced since the 1950s, the most powerful nations in the world are empowering the coffers of everything that is flawed about the global economic system? In terms of representation at the IMF, there is one representative for all 24 African countries while all members of the G8 have a representative each and the USA alone holds the power to veto any decisions made, she points out. While the G20 leaders committed to carrying out reform of the IMF, according to Bhumika, the fact that the money was handed over to the institution before any reform has taken place exposes a lack of any real commitment to bringing about this reform.

This is reiterated by Leo Gerard president and international president of the United Steelworkers of America (USWA) who has a clear message for G20 leaders it is time to reform the financial system not re-establish it. Trickle down economic policies is a philosophy of greed that didn't work yesterday, doesn't work today and won't work in your meeting tomorrow. he says.

But it's also clear to participants that the world can't wait for leaders to bring about change, that change comes about when people come together in spaces like this one. Change comes about through people power.

"There are angry people all over the world, says Gerard, In the United States there are 30 million people unemployed people. Lots of them don't know who to blame and so they listen to the media who tell them to blame the workers who have jobs, blame the immigrants who have 'taken our jobs,'or blame the workers in India, China or Mexico who are prepared to 'work for less'... It is up to us to re-channel that anger to the right place and build a mass global movement for change, a movement for jobs  green jobs  for health care and infrastructure. We know the money is there f, we have seen it, it is just that it has just been going to the wrong people.

This is reiterated later on by Larry Holmes of the Bail Out the People's movement and one of the organisers of the various Marches For Jobs which have been taking place around the summit. When we go out on the streets to march we have to remember we are not there as individuals, he says, millions of people from all over the world who couldn't afford to travel here to be with us but the struggles they are facing are the same. And so when we march we represent every single one of them. We represent women, we represent Chinese workers who are forbidden from joining a union, we represent the millions of children that go to bed hungry every night. We represent each and every one of those people and we are going to March for Change not just today but every single day until we have got what we want.

GCAPis a growing alliance that brings together trade unions, INGOs, the womens and youth movements, community and faith groups and others to call for action from world leaders in the global North and South to meet their promises to end poverty and inequality. GCAPs main aim is to achieve policy and practice changes that will improve the lives of people living in poverty.

Bail Out the People

http://www.indymedia.ie/article/94210
Indymedia Ireland is a media collective. We are independent volunteer citizen journalists producing and distributing the authentic voices of the people. Indymedia Ireland is an open news project where anyone can post their own news, comment, videos or photos about Ireland or related matters.