shannonwatch calls for the rejection of the Lisbon Treaty 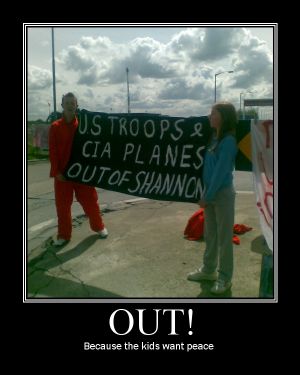 The abject disregard of the Irish political elite for Ireland's neutrality has been demonstrated by the routine transit of US military planes and troops through shannon Airport for most of this decade. With the re-run of the Lisbon Treaty referendum we are now being asked to accept EU promises that it will not affect or prejudice Ireland's traditional policy of military neutrality. But the ongoing support of the Irish government for US-led NATO exercises around the world clearly shows that we cannot trust our leaders to uphold Irish neutrality, with or without the non-binding decisions that have been tagged onto the Treaty in an attempt to have it accepted by the people of Ireland.

Up until 2003, Irish governments upheld the 1907 Hague Convention on Neutrality which states that "belligerents are forbidden to move troops or convoys of either munitions of war or supplies across the territory of a neutral Power". But then the Fianna Fáil-led government agreed to support the build-up of US troops in Kuwait to invade Iraq by providing shannon as a transit base. Since then we have seen daily plane loads of foreign soldiers passing through Irish territory to fight on behalf of an imperial power. Our proud tradition of peacekeeping has been replaced by disregard for widespread human suffering and support for wars leading to regional destabilisation.

The Lisbon Treaty will continue to erode our national values by forcing us to support military actions outside Europe, either on behalf of NATO or a NATO independent force.

The Treaty states that "the Member States shall support the Union's external and security policy actively and unreservedly in a spirit of loyalty and mutual solidarity and shall comply with the Union's action in this area". The "decisions" that are intended to water down this obligation are not legally binding, and it is unlikely that a future Irish government will refuse to comply with demands to support a more aggressive EU foreign policy.

The promotion of international security, democracy and human rights should be key elements of Ireland's foreign policy. However, as a result of our relationship with NATO over the past decade they have been severely undermined. We have played a part in the death of one million Iraqi people and in the displacement of millions more by facilitating troop movements through shannon. We have been part of illegally operated torture networks in a so-called "war on terror". We have contributed directly to ISAF, the NATO-led force in Afghanistan. And we may even have helped with the supply of deadly weapons used on the defenceless and innocent people of Gaza.

With the Lisbon Treaty, the range and scope of the military tasks which the EU wishes to undertake are growing. It introduces twelve new areas within the Common and Foreign Security Policy (CFSP) where majority voting is to be introduced, including a plan to allow "permanent structured cooperation" within the EU framework. This would permit the creation of an inner core of EU members interested in taking forward military integration in order to perform what are described as "the most demanding missions". The notion of a common defense force has already been proposed, with France, UK, Germany, Spain, Italy and Poland likely to spend up to two per cent of GDP annually on defence (at present only Britain and France do this). This elite group would create a European defence market, carry out joint anti-terrorist initiatives, and participate in costly missile defence programmes.

The world does not need another well armed international force seeking to secure regional and economic interests militarily. But Lisbon will give the green light to this, using finances that should be spent on the health, education and welfare of European citizens or on dealing effectively with poverty and oppression around the world. None of the guarantees offered to Ireland will take from the militarisation strategy of Europe's elite. The Lisbon Treaty should therefore be rejected by the people of Ireland.

shannonwatch is a group of human rights and anti-war activists based in the mid-West of Ireland.

http://www.indymedia.ie/article/93325?search_text=shannon
Indymedia Ireland is a media collective. We are independent volunteer citizen journalists producing and distributing the authentic voices of the people. Indymedia Ireland is an open news project where anyone can post their own news, comment, videos or photos about Ireland or related matters.