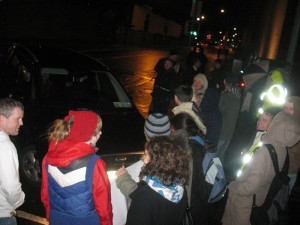 The long running struggle in Erris (Rossport) against Shell's attempt to impose an experimental gas pipeline on the local community has erupted in recent days with repeated local direct actions against the compound Shell are trying to construct. Meanwhile the state, at the behest of Shell, continues to press vindictive prosecutions against local activists. Back in March retired school teacher Maura Harrington for jailed for 30 days, today the state returned for another pound of flesh and she was sentenced to another 7-10 days in Mountjoy prison. At very short notice over 20 activists from Dublin Shell to Sea gathered at the prison gates and showed their outrage by blocking the entrance of the prison van containing Maura in to Mountjoy for about twenty minutes.

The vendictive decision to jail Maura comes at a very significant time when there are growing attacks on Irish workers coming out of the crisis in capitalism. We are told that the billions being spent bailing out the banks has to come out if our pockets and from our health and education services yet the state is giving Shell & Statoil hundreds of billions worth of gas and oil deposits off the west coast without a cent in royalties. (Click here for more details)

The people of Erris have been resisting this project for almost a decade now and have received support and solidarity from all across Ireland and beyond. The Irish state must be increasingly worried by the example their resistance sets to the working class across the island. If a few dozen people in an isolated region of Mayo can defy everything the state can throw at them over a decade (the magnitude of which is illustrated by a Gardai bill totaling 50% of that spent policing gangland shootings in Dublin) then how could the state hope to deal with the hundreds of thousands of workers in Ireland if we choose to stand together and declare 'enough'.

Tonight's blockade was symbolic of the power of resistance, that we can stand together and choose to resist. Shell and the Irish state have spent tens of millions of euro trying to beat the campaign into the ground. They have tried to bribe locals, they have beaten them, they have jailed them and they have wined and dined journalists by the dozen to ensure they get the right 'spin'. But despite all this it's not over yet. And now times have changed, the Celtic Tiger is dead. It's a good time to get involved (or re-involved) in the solidarity groups all over the country and to help make sure the people of Erris are not fighting alone. It's become increasingly clear that this fight is one for all of us.

After about twenty minutes a force of 15 or so Gardai emerged from the police station beside the prison and attacked the protest. With the use of force they managed to clear the road after a couple of minutes, pushing and dragging the protesters away from the van leaving several with bruises.

Maura (center) inside the van

http://www.indymedia.ie/article/92375
Indymedia Ireland is a media collective. We are independent volunteer citizen journalists producing and distributing the authentic voices of the people. Indymedia Ireland is an open news project where anyone can post their own news, comment, videos or photos about Ireland or related matters.