by Shell to Sea

Saturday 9th May, 2009 at 6pm - Day of Action - Support Needed to Remove Shell Fences from Glengad. 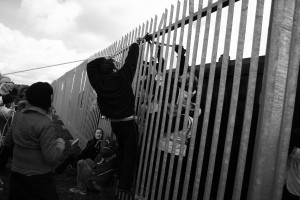 Tearing Down the Barricades

This is a Call Out from the united community of Erris Co Mayo to all our national and international supporters, asking you to come to Glengad this coming Saturday 9th May at 6pm in the evening, on a Day of Action to help us remove Shell's illegal fences from the area.

As you know, Shell returned to Glengad with fences and machinery on Wednesday 22nd April, with force and violence. Since then there have been a number of attempts at removing the fences and stopping the work, with a mixture of failure and success.

As you can see from the photos and footage below, the will is clearly there to fight Shell, in spite of the fact that large numbers of Shell security and Gardai have been drafted into the area. But what is also clear is that numbers are needed to achieve success. Numbers, People, Bodies. That means you. Please come.

By way of background to the current mood in Erris, let's remind ourselves of 2 key recent events.

In the early hours of Thursday 13rd April, Shell mercenaries viciously attacked Willie Corduff within the confines of the Shell compound.

On Thursday 30th April at a community meeting with Ministers Eamon Ryan and Eamon O'Cuiv, people realised that trying to 'talk' to these guys was a fruitless exercise. There were calls from all corners of the community for civil disobedience, the physical stopping of the project and the taking of the 'law into our own hands', when the ministers refused to invite Shell to pull back to allow breathing space to resolve the conflict.

This is serious stuff. The mood in Erris now is that people are willing to pay any price to Stop Shell, and to take action accordingly.

But we need support, in numbers, to achieve the critical mass of people required to be effective. To be effective in pulling down Shell fences in order to remove them.

This protest is about taking direct action against the Shell machine and removing it from Glengad.

The pictures and footage included in this article, which show local people attempting to remove fences today, demonstrate that Action has begun in earnest this Spring and will continue in the coming weeks and months. But it's going to be a battle, when faced, like today, with strong fences and large numbers of Shell security and Gardai. A similar attempt was made last Friday by members of the local community which included Pobal Le Cheile, Pobal Cill Chomain, the Rossport Solidarity Camp and Shell to Sea, but numbers were limited. All groups agreed, at a meeting on the ground, that a National Day of Action next Saturday 9th May was required to build momentum. That is why local people are calling for support, in numbers, to build strength against the show of force against us.

The weather is improving steadily and The Rossport Solidarity Camp is being rebuilt near the shore. People are welcome to come and stay at the camp or the camp house. Phone 085 1141170 or email rossportsolidaritycamp (at) gmail (dot) com

Join us in taking action against Shell. Don't come empty-handed. Please spread the word amongst your friends, groups and networks.

Caption: Erris People Call Out for Support against Shell.

http://www.indymedia.ie/article/92183
Indymedia Ireland is a media collective. We are independent volunteer citizen journalists producing and distributing the authentic voices of the people. Indymedia Ireland is an open news project where anyone can post their own news, comment, videos or photos about Ireland or related matters.