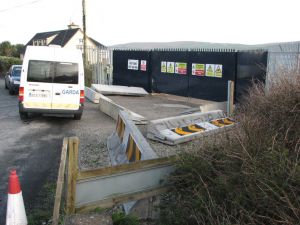 Shell's illegal Glengad compound was dismantled last night and Goldman winner, Willie Corduff was assaulted by masked Shell security during truck protest.
Yesterday Shells attempts to restart their works on the Corrib Gas project were ground to a halt after only eight hours. At 6-30 a workforce of about 20, backed up by around 50 private security guards erected fences to re-establish a compound. This compound is the would-be on-shore pipe installation base. Works were seriously hampered when local people and solidarity camp activists occupied machinery.

By 4 o clock Rossport Five member Willie Corduff was still refusing to leave the from under the truck, which he had occupied in the compound and all work had ground to a halt. Shell were unable to continue as Willie was preventing necessary equipment being used.
As the evening drew to a close Willie was resolute that he would stay and the community rallied around in support. Throughout the evening supporters gathered at the compound to show support for the campaign and Willie Corduffs stand bringing blankets and hot water bottles.


As the crowd gathered tensions rose as Erris people saw first hand Shells attempt to devastate their community for a tenth year in a row. The fence beside the truck where Willie was positioned was removed and the activists made their way to Willie to ensure he was ok. Soon the entire southern exterior perimeter was dismantled. Shells initial works were almost undone.

At this point people returned to see Willie who was cold and still but all things considered was in good spirits. Erris activists had checked Shells attempts to restart work. People sat around talking and were in high spirits.

Protesters Attacked
Around 3am the vigil of supporters were gathered on the road and Willie was accompanied at the truck only by his brother- in-law. Willie had briefly gotten out from under the truck to stretch his legs. The two men were standing beside the truck when up to ten Shell security personnel in black and wearing balaclavas appeared out of nowhere. The men pushed Willie to the ground and started kicking him and hitting him with a heavy object that appeared to be a baton or torch. They knelt on his head and twisted his arms behind his back as they beat him. His brother-in-law attempted to aid Willie but was pushed back repeatedly and forcibly removed by the masked Shell security into an adjacent field where he was then knocked to the ground, kicked and beaten.

A Shell medic stayed with Willie for a period. Local people, who arrived on the scene shortly after the two men were assaulted, were so frightened of the Shell security personnel that they called the Gardaí who were patrolling the area. Willie was removed by an ambulance to Castlebar General Hospital, where he is being treated for nausea and severe bruising to the head and body. A Garda statement confirmed the identity of Willie and his brother-in-laws attackers stating that A protester [Willie] who was present on the site since yesterday was this morning removed from the compound by security staff.

Works as we write appears to be suspended. Willie Corduff is in hospital, the area is on a knife-edge as a mixture of fear and anger brews.

People are urged to travel to Erris now to stand with Erris people to make a stand against Shell.

http://www.indymedia.ie/article/92036
Indymedia Ireland is a media collective. We are independent volunteer citizen journalists producing and distributing the authentic voices of the people. Indymedia Ireland is an open news project where anyone can post their own news, comment, videos or photos about Ireland or related matters.