Shells Efforts to Secure a Net at Glengad are Not Allowed.

Whose Law Is It Anyway? 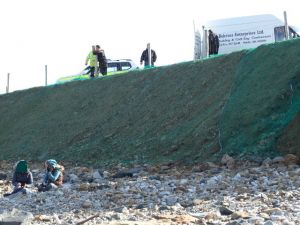 When you see nets, you know there's something fishy going on

For the third time this week nets at Glengad have been put up by Shell and taken down by local residents. The purpose of the net is to stop sand-martins from nesting in the cliff-face.

All sorts of chats, communications and rumours abound about the permission for this and the consent for that, the legality of one thing and the illegality of another. But as Kevin Moore, An Bord Pleanala Senior Planning Inspector predicted in 2002, everything about this project is wrong. And its the right thing to do to disallow it and to stop it whatever the law says.

Related Links from Indymedia.ie:
Previous Indymedia feature: Scuffles At Mountjoy As Maura Harrington Is Jailed
Indymedia.ie stories about Shell in Mayo from the Indymedia.ie Archives
Other articles by Niall Harnett on Indymedia.ie

Shell want to construct a landfall installation at the Glengad Cliffs to secure an offshore pipeline that they have failed to construct for the past 4 years and more because of local resistance.

They have been facilitated all the way by the State who have no regard for the problems of social division, environmental destruction and economic treason associated with development of the Shell Corrib Gas Project.

Shell persist and have returned to Glengad with nets and security to further compromise this sensitive special area of conservation.

Nets were put across the cliff face at the start of this week and have been taken down for the third time today by local residents, openly and publicly, and once in the presence of Mr Denis Strong of the National Parks & Wildlife Service who is quoted as having said ... Eh lads, Id prefer if youd take the nets down when I wasnt around, as he scarpered to avoid his responsibilities, whatever they are.

Theres a rumour that the National Parks & Wildlife Service have given their approval for the net, which needs signing off by the Minister (of Environment I presume) to effect it. The rumour is that the minister has not signed off on it, if that is so. We have emailed the minister and made the appropriate phone calls to get the correct information on this, but have received no answer to our question as yet. Anyway, if a Green minister is clearly in dereliction of his duty to protect this environment, and allow the predation of it by Shell, then its up to the citizens to take responsibility for the management of that.

The cliff was reinstated after the Solitaire left Irish shores without managing to lay any pipe at all last year. See the reinstatement in a previous article here - Shell to Sea Update from Erris & the 'Reinstating' of Glengad.

Of course reinstatement of a cliff like this is impossible since it is impossible to replicate the natural formation of a cliff, especially with a few diggers dumping sand and rubble simply to tidy up their mess.

Whatever the arguments for and against leaving the reinstated cliff face open, or not, for birds to nest; to stand back and allow Shell to persist in compromising the integrity of the area, after they caused the damage in the first place is not a position Id be in favour of. When I saw the net come down for the first time, that ended any confusion for me anyway and Im not alone in that. Maybe Im for the birds myself if Im naive in this but its not up to Shell to dictate where the birds can nest or not. Id leave that decision with the sand-martins.

http://www.indymedia.ie/article/91785
Indymedia Ireland is a media collective. We are independent volunteer citizen journalists producing and distributing the authentic voices of the people. Indymedia Ireland is an open news project where anyone can post their own news, comment, videos or photos about Ireland or related matters.