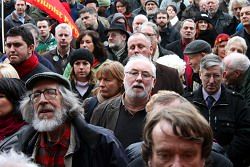 The crowd outside Liberty Hall

Up to 600 people yesterday marched behind the ashes of Bob Doyle from the Garden of Remembrance on Parnell Square to a celebration of his life held in Liberty Hall.

A lone piper led a colour party from the Republican Movement and the Communist Party, followed by three generations of the Doyle family who had come over from London to attend the event.

Behind them marched several hundred people in a display of left unity and solidarity we will doubtless see more of on the streets of Dublin over the coming months. Groups attending the celebration included the main unions, Eirigí, the WSM, the IRSP and Dublin Sinn Féin. Banners were also carried by the International Brigades Memorial Trust and the Inistiogue George Brown Memorial Committee. Supporters of the Dublin branch of the Irish Basque Solidarity Campaign demonstrating outside the GPO dipped their flags as a mark of respect as the crowd passed by.

Two wreaths were laid at the plaque to the Irish volunteers of the International Brigades outside Liberty Hall and after a few brief speeches the assembled went inside where a large photograph of Bob sat over the book of condolences.

Harry Owens, Bob's great friend and comrade introduced Manus O'Riordan, son of the runner up in the competition to be the last surviving Irish Brigadista! Manus read from a letter the Irish Independent had refused to publish countering Kevin Myers' recent attack on Bob and his comrades. His sister Brenda played a slow air on the harp and Manus himself gave us a few bars of a song reflecting Bob's fight against fascism on land and on the sea.

Bob's son Robert quoted from his dad's great speech at Jarama in 2007, which posed the question as to whether his fallen comrades had died in vain. Here Bob had reiterated the fact that the forces that supported fascism in the '30s are still extant today and he stressed the importance of education, unity and civil disobedience. The struggle continued with Bob right until his death and will continue until we achieve peace, freedom and justice.

Eric Fleming, veteran trade unionist and possessor of a fine voice rounded off the afternoon with a rendition of the Internationale. Eric had been instrumental in the erection of the plaque back in 1991 and later on in the afternoon was to regale us with a few more songs of struggle and resistance.

Bob's family asked that a hat be put around for the Life and Hope Association of Gaza, a non-political grassroots aid organisation and at least 1000 was raised at the event.

Why is it necessary to commemorate people like Bob? Such commemorations do not glorify war or militarism; they serve rather to give us an opportunity to pause and reflect on the destruction brought on by war and those who profit from it. Bob and his comrades identified the danger posed by the combination of fascism and capital; they realised the necessity of meeting force with force. He was the last link to that radical generation of the '30s, the last time this country has faced an economic crisis of this magnitude. As capitalism lurches through this crisis we see those who have profited for so long continuing to prop it up, passing the buck to those who can least afford it.

Bob reminds us that things won't change until we achieve unity and a level of organisation which won't necessarily come from the unions or the political parties of the left. Bob was ultimately a believer in the power of mass civil disobedience and perhaps it is down this road we must now travel, for we are strong and we are everywhere.

http://www.indymedia.ie/article/91124
Indymedia Ireland is a media collective. We are independent volunteer citizen journalists producing and distributing the authentic voices of the people. Indymedia Ireland is an open news project where anyone can post their own news, comment, videos or photos about Ireland or related matters.