Shell halted as Shell to Sea '8' are illegally detained.

by Rudiger - Shell to Sea

Shell digger used disgracefully to assist Gardaí in endangering the lives of protesters in the water. 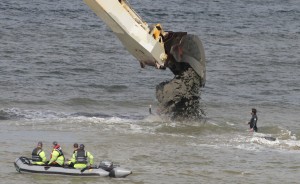 Shell Proving They Care About Safety

This morning at 10am, 15 Shell to Sea activists entered the water at Glengad Beach to stop Shell pipeline excavation work. Dinghies, surfers and swimmers surrounded the machine and stopped the work by their presence in the water.

3 members of the Garda water unit then began picking people out of the boats and the water and bringing the protestors into the Shell compound where other Gardaí conveyed them then to Belmullet Garda station. Gardaí were questioned by activists, asked to identify themselves, and give reasons why they were pulling people from the water. Gardaí were questioned as to what authority they had to give directions or use force against protesters in the water. They refused to account for themselves. Public Order Act shouted one very aggressive Garda.

8 people in all were brought to Belmullet Station, however, it is wrong to state that these people were arrested. The Gardaí never formally arrested the protestors and didnt state under which section they were detained by the Gardaí. So it is more accurate to say that 8 protestors were illegally detained rather than arrested (all protestors were also unnecessarily handcuffed). All 8 were released without charge, with the last being released around 6pm.

With no regard for health and safety protocols, the Gardai entered the sea to wrestle with protesters in the water. On at least one occasion they worked together with the Shell security team who grabbed one protester and held him until the Gardai reached them. Initially the water Gardaí stayed in the boat, however, eventually two Gardaí entered the water to catch the swimmers.

Three protesters moved onto a rock in the sea near the dredging operation. Intermittently the dredger tried to begin work again even with people very close. In one instance, the dredging machine picked up large amounts of debris from the sea bed and dumped it within inches of the protesters. The final three protestors were carried away at around 1pm.

Mary Campbell who witnessed the events on the water said, "It was so dangerous. The huge dredging machine continued working right over those lads' heads and then the Gardai half drowned them. It's amazing no one was killed. It's a crime that the Gardai can work for Shell like that."

Shell have today issued a statement about how Safety, including safety of workers on the site, members of the local community and any other members of the public, is the first priority of the company at all times. However, the pictures below give the total lie to Shell's words and also illustrates that all the safety signs dotted around the compound are only for show as basic safety procedures are routinely breached.

While the protestors were held in Belmullet Garda Station they were made to stay in their wetsuits even though dry clothes had been brought into the station for them by friends with an interest in their welfare. Some of the detainees were held for over 4 hours and so it is totally unacceptable that they had to stay in wet clothes for all that time in the cells.

Today's action was part of a Shell to Sea week of action against the pipeline. Protesters have vowed to continue tomorrow and the following days until pipeline work stops.

http://www.indymedia.ie/article/88786
Indymedia Ireland is a media collective. We are independent volunteer citizen journalists producing and distributing the authentic voices of the people. Indymedia Ireland is an open news project where anyone can post their own news, comment, videos or photos about Ireland or related matters.