They're on Trial For Us, We're on the Loose for Them! 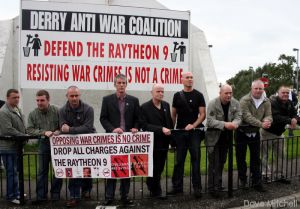 The Raytheon 9 are an inspiration. I just got a phone call from my friend Les who's trying to get a plane ticket to get to Belfast for the Raytheon 9 trial. Les hasn't been to Northern Ireland since he did three tours with the British military. He says is it is so exciting that socialists and republicans are experimenting with nonviolent direct action and he wants to be there to support them at the trial. He says that this would be a great way for him to return to Northern Ireland - confront his past and celebrate a future with a community in resistance to war.

Les was a British soldier who has moved on to nonviolent direct action against the war machine - in the '90's he broke the sanctions on Iraq and in 03 was arrested blockading the HMS Ark Royal as it pulled out to Iraq and the start of this war. As he was being arrested at Aldermaston a few years ago, the arresting cop forcing him to the ground and cuffing him said "You were in my unit in Northern Ireland!" Les's expression of regret for the previous activity they had undertaken together did not win him any favours.

Meanwhile Bush has been invited to Belfast as man of peace with the hope of further U.S. investment with no mention of restrictions on weapons manufacturers such as Raytheon http://www.counterpunch.org/harkin05302008.html The north fast tracked from the fringe of empire to central comfort zone where hi tech weaponry can be constructed and where troubles are exported to Iraq, Afghanistan, Lebanon, Colombia et al and become someone Else's troubles.

To spend the day around the Raytheon defendants in the Laganside Courthouse has been an inspiration. To be around people risking their liberty for peace and justice is always both a nourishing and challenging experience. It always poses the question what can I do in response to their gift and the wars that continue to claim so many victims.

Inside the court - at the front there was the Judge, to the side the jury, in the middle I counted 20 legal (mostly bewigged) professionals, at the back there was 30 of us in support from Derry, Dublin and Belfast. We were parents, partners, SWP, Catholic Worker, Quakers, Pax Chrisit, Republican, punk, a long hair lad from Hollywood and other traditions.

And then there were the defendants being frisked as they entered this weird kind of plexiglass, aquarium like pod in the middle of the courtroom. Boiled down these were unmistakeably Derry lads who did the right thing at the right time as Lebanon burned and Raytheon raked in the profits. A barman, a biker, a journo among their number. They stood with their action to save lives and are here today, 2 1/2 years later, risking their liberty to speak some truth to power.

Eamonn McCann took the stand. Born on the Derry's bogside in 1942 his parents were of the working class - a labourer and a retired nurse. His testimony traced his life's trajectory that brought him into Derry's Raytheon's offices - anti-Vietnam War, civil rights, labour organising, radical journalism and sustained activism.

The events immediately preceding the occupation and decommisioning of Raytheon by the nine were described. There was a sense that this was a very Derry action. We were in the company of people who walk the walk after they talk the talk. A large crowd had gathered at Sandinos Bar in early August 06 to hear visiting U.S. veteran of the Iraq War Joshua Casteel http://www.youtube.com/watch?v=fM8jjqxtSpY and an Iraqi exile describe their experiences of the war on Iraq.

The discussion, that followed the presentations, quickly turned to the U.S./Raytheon equipped Israeli bombing of Lebanon ongoing that night. The realisation that Raytheon with a plant in Derry was profiting and pivotal to the slaughter of these Lebanese civilians. The questions posed, what is our response, what can we do to intervene in this slaughter?

The follow up meeting a few days later had all the hallmarks of human frailty that speaks of our movement that confronts corporate entities such as Raytheon ("light from the Gods") that claim omnipotence and the power of life and death. The room booked at Badger's Bar was double booked and the fine tuning action meeting of 50 souls took place in the public bar much to the bemusement of fellow nonalligned drinkers. Then it was off to Raytheon on the morning of August 9th (the 61st. anniversary of the destruction of the city of Nagasaki by one bomb).

The last team talk was given in a nearby carpark by Goretti Hogan who emphasised a commitment to nonviolence and an objective to disable Raytheon's equipment in attempt to preserve life and social infrastructure in Lebanon. Down the hill and around the three police officers present and the door kindly open by a worker entering the building. Up the stairs and into the corporate officers where software to deliver destruction is produced. But what would life be without a domestic?

Eamonn and Gorreti concluding that their 20 year old daughter with severe learning need a difficulties a parent at large. Gorreti left the building, the door was barricaded and the very human work of military disarmament got underway. Raytheon's mainframe computer was decommisioned with the use of a handy fire extinguisher. Raytheon computers and paperwork were despatched through an open window onto the car park pavement below. After 7 hours the barricade was broken with a chainsaw and the robocops inched forward around the nine card playing resisters. A scene reminiscent of the last roundup of Jake and Elwood Blues Brothers!

Also recounted was the nine defendant's post arrest sojourn to the heavily bombed Lebanese town of Cana where they experienced firsthand the victims and orphans of Raytheon.

On cross examination the Prosecutor did his best to suggest that there was another agenda other than an attempt to preserve life in Lebanon that drove the nine. He suggested this was not a direct intervention but a publicity stunt. On recross the defendant explained he was a radio/television/newspaper journalist with little need of publicity stunts to express his views. The Prosecutor tried another tack - this was a revenge on Raytheon of wanton destruction following a frustrated political campaign. McCann pointed out if wanton destruction was the motivation the computers would not have gone out an open window but a closed one. Point taken!

The trial continues tomorrow. From my experiences what is significant in these dark times is solidarity and resistance. There isn't much resistance in the West these days because there is not much solidarity. The more solidarity the resister/defendant experiences the easier the task, the burden is lightened.

I hope Les makes it to Belfast.

If you can't make it to Belfast check out their website http://www.raytheon9.org and spread the word.

Send a text to me at the court. I'll copy it down and pass it on to the defendants

Related Link: http://www.raytheon9.org
http://www.indymedia.ie/article/87799
Indymedia Ireland is a media collective. We are independent volunteer citizen journalists producing and distributing the authentic voices of the people. Indymedia Ireland is an open news project where anyone can post their own news, comment, videos or photos about Ireland or related matters.