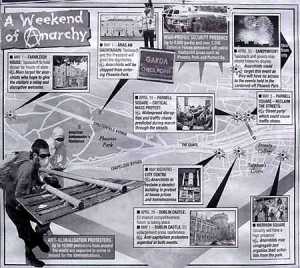 A Weekend of Anarchy

Its been a while, but now they're back. As the sun comes out we have the first bitch fest of the summer in this (possible) lineup for the grassroots gathering. Reading like a more convoluted version of those old Indymedia favourites - 10 reasons to hate the grassroots gathering - this article proves how popular a bit of criticism, constructive or not, really is.

Opening feedback / reports from the sessions (limit of 2 minutes each!! - only a brief recollection - perhaps the most important conclusions reached, if any, from the workshop sessions)

The plenary is open to everyone to talk to, and is being held in an atmosphere of openness and tolerance. No aggressive or intimating repsonses will be permitted. People are free to constructively criticise and discuss openly any doubts they have about their own activism or that of the group.

This year, the Gathering has decided to look inwards at itself and reflect on several years of action - and inaction. The theme of this Gathering in Dublin is "Reflection, Honesty, and Failure." The aim of this Gathering is to examine issues which we regularly come across as activists (because to say we are anything but activists is lying to ourselves, many of us occupy a large chunk of our time with protesting and related political acitivity such as organising, fundraising, meetings, etc - very much more than an average citizen, even one who may be politically leaning towards us in the political spectrum), yet we do not discuss, confess, or own up to because it is difficult, awkward, or perhaps a little too close to the bone for us to admit when we are wrong or have made a mistake.

The Gathering will take a similar format in previous years where there have been workshops during the day, focusing more on a specific topic, and then a plenary or larger gathering later in the day, where delegates from the individual workshops will give a quick feedback from their meeting, and then the floor will be opened up to a larger overarching theme where everyone can participate. The reports will be given a limited time span as to allow for more people to contribute, and the plenary session will be moderated so as to ensure the same people do not monopolise the contributions.

The Gathering is open for anyone to attend to. This year we are trying again to diversify the attendees, and have sent invitation to community groups and other organisations who have not come to the Gathering before, but given the nature of this years Gathering, and the fact that we had nothing concrete organised with only a couple of weeks before the event, we expect to attract the standard profile of activist to the event (white, reasonably well educated, with good long term prospects, and from a comfortable if not execessively rich background) as we look back over the past few years since the Gatherings began. This issue itself will be discussed in the final plenary session.

If you need accomodation please contact the Gathering. There will be child care facilities in the afternoons, and food will be provided (donations welcome).

This film of the G8 protests in Scotland in 2005 takes a critical look at the Dissent! Network that existed in the run up to the summit, and subsequently evaporated into nothing. More of a polemic/essay in the style of "Route Irish" than a documentary, the editors ask what legitimacy the Dissent! network had considering they only managed to bring approximately 5,000 demonstrators to a protest which took months of organising and planning, in a country of over 50 million people (0.01% of the population demonstrated). The model of consensus which the Dissent! Network prided itself on also appears as something of a sham in the post-summit personal interviews, with in-fighting, finger pointing, and (eventually) aggression and physical violence between Dissent! members who disagreed on tactics and wording of a document. Music and visuals afterwards provided by Electronic Resistance.

A general introduction to the day, explaining the theme of the Gathering and the way in which the workshops will operate.

"Ireland from Below" was meant to be a regular newspaper documenting community struggles in the country, as well as libertarian, environmental, and direct actions happening amongst different groups that operated beyond the traditional hierarchical model. But after two issues, the paper folded in acrimony and personality clashes. What exactly happened? Who was to blame and why did so many people abandon the project very early on? What lessons can be learned from this?

The last genuinely libertarian action with any organisation or decent attendance regarding Ireland's participation in the "War On Terror" with the refuelling of planes in Shannon Airport was in the summer of 2004 with the "AmBush!" campaign. Since then, we have collectively done nothing about this issue, effectively abandoning it, despite the revealing of the abhorrent "torture express" passing through Shannon on its way to Guantanamo Bay, and planes also being fuelled in Dublin Airport. The once active anti war network disappeared with a whimper. Yet the refuelling and troop stop over continues (and even grows bigger), so have we internally conceded defeat without ever expressing this?

Why do we participate in predictable marches with boring speeches from people who we dismiss? What is the point of having an anarchist "block" on marches that are deflating and aimless? Five years ago there were regular anarchist marches around the city centre - Carlo Giuliani, the anti EU police meeting, RTS - now there is nothing - why? Why do we ALWAYS tag along to these marches? Are we just hoping to recruit some people along to our type of politics?

ROOM ONE: DIRECT ACTION GETS RESULTS - OR DOES IT?

One regular slogan we proclaim is that direct action gets results. But in many of our campaigns that we have been involved in where the focus has been solely on direct action, we have not achieved our aim - Shannon, S2S, the Bin Tax, etc. Does direct action actually work? When has it actually gotten results for us? Are we wrong to focus on it solely as a method for resolution? We regularly cry foul when other groups do not support our choice of method for political action - but we are just as quick criticise others for their choice of political action - seeking election. With Shell To Sea in particular, the most recent election saw two supportive TDs (Jerry Crowley and Joe Higgins) losing their seats, with the campaign having lost two voices who brought the issue to attention in the media and in the Dail. Now there have been no "days of action" in 2008 with activists from other parts of the country performing direct actions at the site, and the RSC has been disbanded. Would it have been worth swallowing our stance on this occasion to see politically similar activists elected - or are we always to follow the same line that direct action is the only method, and that electoral politics is entirely a sham?

ROOM TWO - SQUAT OR ROT, OR NOT

With so many derelict buildings in Dublin, why does the Seomra Spraoi collective continue to seek a building to rent? How much of the system have we sold out to when we pay a landlord 2000 euro a month? Squatting is illegal in Ireland - but have we given up trying to change the law through direct action? Recent experiences have shown that renting a building does not offer much more protection against harassment from the authorities. Is our reluctance to squat based on our own fears of having a criminal record damaging our chances for future employment?

ROOM THREE: THE TYRANNY OF STRUCTURELESSNESS

At various times we have tried to set up a network associated but beyond the gathering - GNAW, (D/C/G)GN, Grassroots Dissent - and all have evaporated into nothing. Without a formal membership structure, is this destined to always be a failure? Or simply has the Grassroots political ethos been subsumed by the WSM? Is there any appetite for trying to organise such a network, again?

RAG host a discussion based around Ariel Levy's book "Female Chauvinist Pigs". How do we as feminists approach and deal with women who claim that they have listened to the feminist argument, and understood it, yet have no problem objectifiying themselves in beauty contests, advertising, and even pornography? Do we consider these women our sisters and stand with them in solidarity, or are they enemies of gender equality? Are they to be debated with, pitied, hated, or dismissed? Why would we campaign against a beauty contest when women themselves choose to participate in them? Is it a fallacy to simply label all women as having similar political opinions and outlook on life simply because of their gender?

ROOM THREE: THE BEGINNING AND THE END - ORGANISING CAMPAIGNS

When is a campaign a victory and when is it a defeat? Why do we start so many campaigns and protests, yet never follow them up with further actions? When we start up a campaign, do we have our objectives firmly defined - and when we dont, does this ultimately mean that we will eventually lose interest? Are we ready to admit failure when our objectives are not achieved, or do we keep on calling for "struggle", yet not do much of it ourselves? This workshop will look at various campaigns and issues that we started but never really worked out a conclusion to, such as the current Save Moore Street campaign, No Border No Nations from Mayday 2004, Shannon, Get Up Stand Up/Precarity, amongst others.

Opening feedback / reports from the sessions (limit of 2 minutes each!! - only a brief recollection - perhaps the most important conclusions reached, if any, from the workshop sessions)

The plenary is open to everyone to talk to, and is being held in an atmosphere of openness and tolerance. No aggressive or intimating repsonses will be permitted. People are free to constructively criticise and discuss openly any doubts they have about their own activism or that of the group.

This plenary session will focus on the future of the Grassroots Gathering, and ask hard questions relating to its existence.

- Why are there only a certain type of activist at this gathering - do we have respect for the methods and organisational structure of other groups who are not libertarian?
- Why are the communities repressed by capitalism (women, ethnic minorities, working/dispossessed class people) so under-represented in our meetings and activities? Are they uninterested, intimitated by our language, or simply uninterested in our politics?
- Is there any point to the Gathering when it is so infrequent, and simply acts as a "talking shop", i.e. no effective organisation to take ideas generated at the gathering into a campaign of action? If this is the case, then why dont we just use the internet more as a forum for letting each other know what we are doing?
- Most of us would call ourselves revolutionaries, and ultimately hope for this, spending our time and mental energy on it - yet there has not been anything even approaching this in the western/developed world in the past 40 years. Are we wasting our time here - particularly in a country with a 75% right wing vote, that doesnt even yet have the maturity to vote on a left/right split?
- Have we as a Gathering or a movement ever participated in a struggle with our methods that was a success?
- Why do we continue with the Gatherings when there is little appetite for them, both nationally and in Dublin? (A previous local attempt, the AAA, vanished after only a handful of sessions).


Related Link: http://www.indymedia.ie/article/87600
http://www.indymedia.ie/article/87534
Indymedia Ireland is a media collective. We are independent volunteer citizen journalists producing and distributing the authentic voices of the people. Indymedia Ireland is an open news project where anyone can post their own news, comment, videos or photos about Ireland or related matters.