by Rory Hearne - on behalf of CRAI 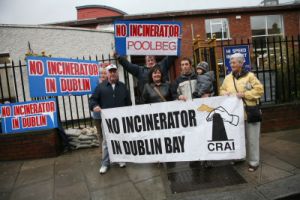 
The Combined Residents Against the Incinerator (CRAI) which is made up of residents from Ringsend, Irishtown, Sandymount and other parts of Dublin is currently making presentations to the Environmental Protection Agency (EPA) Oral Hearing on the proposed mass-burn incinerator, planned to be built by Dublin City Council on the Poolbeg Peninsula in Dublin City.

CRAI submitted 3000 letters of objection to the An Bord Pleanala Hearing in October 2006 but despite this An Bord Pleanala granted planning permission to Dublin City Council (DCC) to build the 600,000 tonne mass-burn incinerator. The next stage in this process is the EPA is deciding what sort of waste pollution licence it will grant to DCC for the incinerator. CRAI is calling on the public to attend the hearing and make their voice of opposition heard.


The aim of this article is to encourage those who oppose the incinerator in Dublin to do something to help. They can do this by joining CRAI and speaking at the oral hearing. CRAI is paying for all legal costs and the costs of bringing experts to speak at the EPA itself. We need funds to keep the campaign going. Membership of CRAI can be gained by donation, a small sum. (20 Euro or whatever you can afford) (contact Frances Corr for details 0877715825).

There is a time allocated to CRAI membership to attend the hearing this Tuesday 6.30pm-8pm at the Gresham Hotel, O Connell St. Short Statements can also be given in writing by members and the will be read into the evidence or members can attend in person and make a statement.
The oral hearing will continue for at least a week.

CRAI held a protest at the first day of the Environmental Protection Agencys oral hearing into the proposed Dublin Incinerator on Monday April 14th. Frances Corr of CRAI speaking at the protest said:
The proposed mass-burn Dublin Incinerator is a flawed, dangerous, extravagant and a totally unsuitable solution to the waste management of the Dublin region. The site is completely unsuitable. We will show at this EPA Oral Hearing that the EPA must refuse this licence in order to achieve sustainable development. The proposed incinerator will require guaranteeing a waste stream and tip fee contract which mitigates against recycling, reuse and reduce principles.

The Draft EPA licence stated that all waste should be pre-treated to remove the waste that should be recycled and in fact DCC is objecting to this, and other, conditions. This demonstrates that DCC want a mass burn incinerator that will treat 600,000 metric tons of waste in order to make it economical for the private partners Covanta/Dong.

Furthermore, CRAI asked Minister Gormley to expand on his recent statements that incineration is no longer government policy and clearly define what will replace incineration. If this were known the campaign believes it would be a matter of considerable influence on the outcome of this oral hearing. Recently issued figures for predicted waste disposal in the Country appear to show that, if alternative modern technologies are adopted, the total available national supply of residual waste for incineration would be of the order of 627,000 tonnes. We are asking the Minister to confirm this figure and state what proposals are before him to introduce these technologies.Clearly if this figure is correct the required capacity of the proposed Dublin incinerator has been seriously overstated and, therefore, if the policy is implemented it would lead to the incinerator becoming redundant.

Speaking at the protest, Rory Hearne of CRAI said:
It is vital that the general public hear the evidence presented at this oral hearing. Residents and their experts will explain the dangerous health and environmental implications for the local and city-wide population if this incinerator goes ahead. We are focused in this campaign on explaining that this is a Dublin incinerator not just Poolbeg. It will affect people across the city in terms of the dioxins released, the increased waste charges required to keep the private operators in profitability, and the increase in traffic. In particular from a sustainability perspective it is very clear that if this incinerator goes ahead it will be a major set back for recycling and reduction waste strategies because all the waste coming from Dublin (and perhaps beyond) will have to be directed into the incinerator to facilitate the incinerator to run at full capacity to ensure the private operators gain their financial return.

Maurice O Brien of CRAI has been documenting the important details of the hearing to date. Much of this Fridays session of the EPA Oral Hearing into the proposed Dublin Incinerator was devoted to technical matters, with the examination completed of Mr. Twomey (DCC), a new witness in Mr. Behor, vice-President for sustainability of Covanta, the dominant partners in the Public Private partnership set up to design, build and operate the facility if it is ever built. He set out the operation of the proposed filters to remove toxic material from the flue gas, and was still being queried about details by Community Representatives, particularly well by Joe McCarthy, when the lunch break was called.

At the first session Sinn Fein's Mary Lou Macdonald and Daithi Doolan gave concise and cogent presentations, while the afternoon one contained a vivid and worrying presentation from Doctor Stefano Montanari that much improved the hearing's understanding of the formation and distribution of very small particles that can wreak havoc on the human and other receptor bodies, leading to long term serious illnesses like cancers, diabetes, vascular disease and many others.

But perhaps his most sensational evidence was that it is now possible to identify the source of these very small particles so that, in future, the cause of fatal illness can be identified after death.

The day finished with several brief presentations by Ruari Quinn, T.D., and Councillors Lacey and Humphries before the hearing adjourned to Monday at the same location.

The evidence given to date will require analysis by the Chair and the EPA Board, but the general trend is that it adds strength to the argument that the proposed facility is the wrong project in the wrong place.

Evidence on Thursday at the EPA Oral Hearing at the Gresham Hotel into a licence for the proposed Dublin Mass-burn Incinerator largely concerned the possible effects on the natural environment and air quality. In examination by community representatives it became clear that, in several aspects, best protection had been compromised in the interest of cost savings. (Perhaps not surprising when an official "cap" was placed on the cost before any negotiations even took place!)

It was also admitted that the best protection from environmental damage would be to locate the facility, if it were absolutely necessary to build it, in a less sensitive location.

It then emerged that no study has yet been made of the damaging effect of very small particles that would be emitted, the so called "nano-particles". These are now being recognised as the most deadly material to emerge for the incineration of municipal waste.

Even if the licence is granted to Dublin City Council CRAI will continue to oppose the incinerator and has a number of options open. CRAI has sent a legal summons to the Minister for the Environment John Gormley, the Irish State and Dublin City Council to answer the charge in court regarding their failure to enforce EU Directives in relation to the planning and development process of the Dublin Incinerator. Community mobilisation and protest will and is continuing.

http://www.indymedia.ie/article/87265
Indymedia Ireland is a media collective. We are independent volunteer citizen journalists producing and distributing the authentic voices of the people. Indymedia Ireland is an open news project where anyone can post their own news, comment, videos or photos about Ireland or related matters.