On site reports from the trenches at Rath Lugh 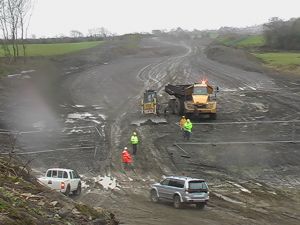 View from the edge of Rath Lugh

From the Newswire - Posted Monday 25th February:
There are fences across the proposed route each side of the Rath Lugh woods. At around 8am this morning a member of the Rath Lugh camp heard machinery passing by the rath. 6 of us went out and saw 2 dump trucks and 2 diggers outside the fence, coming from the Baronstown direction. Each digger was 40 tonnes, and wanted to drive though at the same time! A large crowd of SIAC, Ferrovial and Wills Bros workers were present, 2 members of the Garda Siochana were also present, both in incomplete uniforms; they didn't wear hats, one of them wasn't displaying his ID number on his shoulder. We explained no machinery would be passing by Rath Lugh, that the area is preserved and it is a criminal offence to interfere with or damage a national monument. The weight and vibrations of the machinery will affect the monument on the esker, and so endanger all of Rath Lugh. The workers took absolutely no heed of anything we told them.


Protesters climbed onto the machinery to peacefully blockade their path. The rest of us stood in front of the machines. The Gardai took our names and addresses. acThe protesters on the machinery climbed off the machines, because one construction worker tried to forcably pull a male protester off the digger. The female protester was walking towards the Rath, when she was manhandled by the Garda with no hat, car or ID number on his shoulder. The Gardai didn't give her a caution but arrested her straight away. He handcuffed her and when we questioned him, he mentioned OPERATION BEDROCK. He then attempted to drag her to Mark Cleary's jeep, as there was no squad car to be seen. We immediately objected to this illegal arrest, but the Gardai kept pulling her, even through she was visibly upset. There were no female Gardai present, we expressed our concerns about a young female being taken off site by 2 extremely unprofessional Gardai and driven off in a violent man's jeep (Mark Cleary's. Photos of this man can be seen on this site, or Indymedia.ie, his drives a white jeep and his registration plate is 07 D 60531).

The Gardai finally seemed to understand our worries about this illegal arrest, and decided to walk her off the site and take her to Navan Garda Station in their squad car, which for some unknown reason was parked down the route near Baronstown. I walked with the female protester and the 2 Gardai towards Baronstown. She was handcuffed behind her back, and when the wind was blowing dust in her eyes, they wouldn't free her so she could wipe the dust out. It's worth noting that this site has had its topsoil removed and is compacted earth with lime to dry out the ground. They joked rather insensitively I should wipe her eyes instead! When I asked the Garda with no ID why he mentioned OPERATION BEDROCK, he refused to comment. Finally we arrived at their squad car, but a Paddy Wagon was there, and around 8 men in plain clothes wearing Garda Siochana wind cheater jackets. When I asked them why they weren't in full uniform they explained they were plain clothes Gardai. I again expressed my concerns about this dodgy crowd taking one of our young female protesters away, and requested I come with her, for her own health and safety. They refused immediately, one Bean Garda was extremely snappy, explaining the female protester would be safe with her. I said this was exactly what I was worried about and asked would they handcuff me so I could accompany my colleage. The same Bean Garda said I have often made my own way to Navan in the past when needed be. The Garda didn't uncuff my colleage in the back of the car, so when they braked suddenly she hurt her back and now needs medical attention.

We made our way back to the front line at Rath Lugh and were about to head into the Garda Station in Navan when we got an urgent phone call from the front line. A dozer was at the left fence, coming from Baronstown direction. A smaller digger was working on a spoil heap a few feet away from the esker. We immediately blockaded the machinery peacefully to prevent them working. All of the SIAC, Ferrovial and Wills Bros were sitting in their jeeps as it was hailstoning and extremely windy. A Garda jeep approached from Lismullen, with the same 2 Gardai who arrested my colleage an hour earlier. The bald Garda without his ID number earlier now had his ID displayed, obviously he realised he made an illegal arrest earlier. We handed them the Rath Lugh Preservation Order, which they accepted. The Garda who displayed his ID number explained the dozer would be passing throught to Lismullen, but he was stopping the digger from working until the matter of the Preservation Order is clearer. We blocked the esker from being harmed as the dozer passed by s to the Lismullen site. When asked about the plain clothes Gardai, the Garda denied their existence. When I reminded hiym I spoke to the plain clothes Gardai myself, he corrected himself. He said they were on standby. On standby for what we asked, explaining our own health and safety is of paramount importance. He refused to comment further.

6 construction workers approached the front line bender, took measurements around the perimeter fence of the bender, using surveying equipment. Construction workers in jeeps attempted to drive past Rath Lugh again from Baronstown to Lismullen, but the Gardai refused them permission, until the Preservation Order matter is clearer.

I am now on going to bring the female protester who got released to hospital for medical attention.

http://www.indymedia.ie/article/86406?search_text=tara
Indymedia Ireland is a media collective. We are independent volunteer citizen journalists producing and distributing the authentic voices of the people. Indymedia Ireland is an open news project where anyone can post their own news, comment, videos or photos about Ireland or related matters.