Battle in Seattle- Anti-Capititalism on the Big Screen 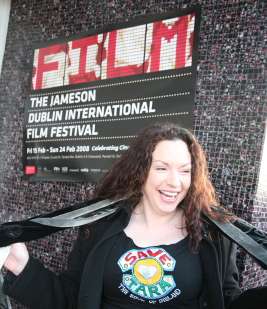 Townsend's interpretation of the famous Battle in Seattle, where the World Trade Organisation was shut down due to the emergence of what the media labelled the anti-globalisation movement has finally hit the big screen, and it doesn't get much bigger (in Dublin) than the prestigous Savoy Screen Number 1!

The whirlwind fictional interpretation of the event which launched the global phenomenon of Anti-capitalism has finally hit the big screen Stuart Townsend a famous actor from Howth (I don't think i've seen anything he's in!) has given what has been a fundamental part of our collective experience a fictionalised treatment and presented it to us in the cinema. This is important as he has given the whole issue a very sympathetic treatment even though he wasn't part of the protests back in 1999 in Seattle. The film gives a rapid history of who what where when and why of the WTO and the 5 W's of the movement which emerged to tackle it.

Yes there's a love story, complex personal stories around the event itself, views from side of the Police, the Mayor of Seattle, the pressures as the National guard were to be called in- all to lend an air of balance and credibility- who in Hollywood will fund and distribute a guerrilla movie of what actually happened then ( yes there's lost of alternatives- post them all up)? Yes Stuart in the Q & A session after explained how he researched it. He said it was all internet based research, and it shows. there's a depth and a quality to how the story is shown and told, not from a workers or black block viewpoint but from the viewpoint of some of the affinity group organisers. It's always easier to tell a story from a finite viewpoint especially from such a scale of protest and as a result the overall story of how the tens of thousands of protesters from all over the Northern and Southern American Hemispheres' managed to organise to shut down the WTO wasn't conveyed.

However this article is not to knock the wonderful efforts of the film. Since Seattle there has been much ground made over highlighting the issues around global capitalism and it's been very uneven to say the least. But the battle for ownership of the stories and who tells those stories has been an interesting one. The Indymedia phenomenon has been one of those, bypassing or challenging received news by letting those who don't have a voice have a voice and thereby challenging the corporate media is one of those. When the stories, issues and debates around anti-capitalism are given a Hollywood treatment it is important how that's conveyed.

Many of the audience consisted of people who had participated in Genoa, Florence, Evian, Gottenburg and Scotland against the G8. Some lamented their love life was far less glamourous than portrayed in the film and the cushiness of police cells in Seattle compared to the treatment many received at the hands of the European police. But there was a palpable excitement that retelling that story in cinema does validate a recent history of resistance- it is a story worth telling and we want more.

The film ends with that undying optimism that another world is possible and worth fighting for, a message which carries through right the whole of the film. The film does end on Seattle but refers to many of the global protests which are not Eurocentric and sees the resistance passing throughout the globe from Philipines, Korea, Venezuela, and Honduras to name a few.

This ain't a definitive review, just some quick notes to go with some pictures some would like to see. And yes Stuart Townsend did mention tara and the M3, not in a favourable light of course. Townsend and Theron are part of the good guys. He described how difficult it was to get a distributor for the film and how he was finalising that particular deal.

Is this film worth going to see? Definitely.

http://www.indymedia.ie/article/86312?search_text=tara
Indymedia Ireland is a media collective. We are independent volunteer citizen journalists producing and distributing the authentic voices of the people. Indymedia Ireland is an open news project where anyone can post their own news, comment, videos or photos about Ireland or related matters.