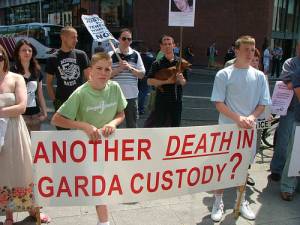 Another Death and Nothing Gives Yet

A meeting with representatives of the Rossiter family, the Wheelock family, the maloney family and the families of Rossport Co. Mayo who ask an audience of more than 200 people why the Garda Síochána are above the law.

Tonight at the Royal Dublin Hotel more than 200 people turned up to support the Wheelock family, the Maloney Family, the Rossiter family, the besieged people of Rossport and to voice their fears and feelings regarding the fact that An Garda Síochana are a law unto themselves and that they act without fear of punishment or condemnation.

Eamonn Dunphy whod chipped a tooth was unable to come. This did not take from the meeting itself. First to speak from the panel was John Maloney whose son - also called John, had been arrested and shortly thereafter had been found a short distance from the Garda station where he was held, in a coma.

John never regained consciousness and died 13 days later, leaving a family who loved him without answers or comfort. Johns father told the hushed audience that the gardaí had arrested his son even though there was no charge against him after they had performed a fruitless routine drugs search.

Next to speak was a representative of the Rossiter family from Tipperary. The Rossiters had been unable to make the meeting and sent their apologies to the people who attended the meeting and also their support and solidarity. The Rossiters too lost a young son, who did nothing wrong or unlawful either, and who died in similar circumstances to John Maloney. Again neither the State nor the Gardaí have offered a reasonable account of what happened.

John Monaghan, representing the people of Rossport and Shell To Sea spoke next. In quiet tones he explained to the audience that he was unlike the other people on the panel, in that he hoped to prevent the same thing that had happened to the other families from happening in the future in Rossport. John informed us that the Gardaí have avoided, for the most part, arresting those who engaged in protest in Rossport, in the hope that theyd not help create any martyrs, to use a term that John quoted the Gardaí as having used - and in print too. Instead the Gardaí have resorted to the use of savagery on behalf of the multinational that they have become the private enforcers for.

The last person to speak from the panel was Larry Wheelock. Larry gave a brief description of the events leading to the death of his young brother in Garda custody. Larrys young brother was assaulted by the Gardaí before they got him to the Garda station and again when they got him there. Hed been arrested under suspicion of having supposedly stolen a car. He was never charged and now he too is dead. Again no satisfactory answers from either the State or the Gardaí are forthcoming.

When Larry finished speaking the microphone was given to the floor. People are angry. People are hurt. We have been betrayed and nobody in authority wants to acknowledge it.

I recorded this meeting and have uploaded it so those who wish to witness what was spoken of may do so. Ive broken the audio into two parts, the first deals with what the panel had to say and the second is what happened when the mic went around the audience. An emotional and heartfelt meeting - what will come of it?

http://www.indymedia.ie/article/85288
Indymedia Ireland is a media collective. We are independent volunteer citizen journalists producing and distributing the authentic voices of the people. Indymedia Ireland is an open news project where anyone can post their own news, comment, videos or photos about Ireland or related matters.