Development To Spell The End Of Moore Street Market? 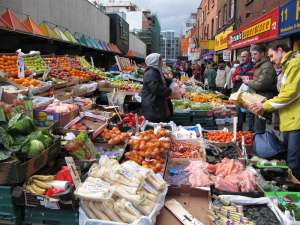 Are Developers To Drop A Dundrum On The Market's Head?

Dublin's much loved Moore St. market, one of the most organically diverse, culturally & historically layered streets remaining in Dublin city centre is under serious threat of extinction from a 500 million multi-story commercial development. Plans are soon due to be fully unveiled to the public.

Take a walk along Moore Street and one will notice the disappearance of the many ethnic businesses which have enlivened the street over the past several years having recently been served eviction notices. The beginning of a process which may eradicate and at best sterilise the Moore Street market.


These plans are due to be submitted for planning application with the full support of Dublin City Council in what will no doubt be sold to the public as a 'visionary' and 'revitalising' project for the north inner city.

In reality this is a soul-less, short-sighted enterprise with a purely commercial approach in the heart of Dublin - a city which in the recent economic boom, has too often been victim of unscrupulously savage building development which is slowly eroding its inherent spirit and character.

Readers may be aware of the preservation orders placed on No's 16-19 Moore Street (in commemoration of 1916), which will be incorporated into the new development. At present the Moore Street Traders have been given minimal consultancy, with lip service being made to include the market in any new scheme. However, one would have to write with cynicism as to the sincerity of any promises made by either the developers, or Dublin City Council who have done little to support the traders over the last decade.

The insatiable materialistic driving forces at work behind this development are completely devoid of sensitivity to the value which particularly the market plays in the local urban fabric. The shallowness in approach is reflected in the architecture and urban design of the project, bereft of any depth or sustainable thinking.

The Moore Street market also serves as a strong anchor for the inner city working class communities. The stark contrast between the overly commercialised stress created along Henry Street with the organic and human atmosphere created by the market is acutely apparent. The clear distinction here is between what is real and what is fake.

Plans of this development will soon be made available to the public who have the power to object and make a stand with the traders. Currently the traders have been told they will be accommodated but will have to relocate during the construction period which could be up to five years. Dublin City Council have not given the traders any alternative location for this period nor is it clear if any storage units will be provided in the new development necessary for any daily market to function. All the indications point towards the traders being permanently squeezed.

The objective of this article at this point is to raise awareness among readers of indymedia toward these plans.

http://www.indymedia.ie/article/85003
Indymedia Ireland is a media collective. We are independent volunteer citizen journalists producing and distributing the authentic voices of the people. Indymedia Ireland is an open news project where anyone can post their own news, comment, videos or photos about Ireland or related matters.