Shell 2 Sea stop drilling on an Special Area of Conservation 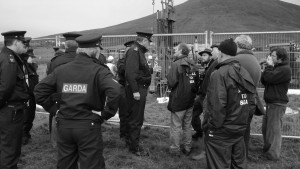 "I don't care about the law, I'm a member of the Gardaí"

Shell to Sea protestors yesterday successfully stopped Shell and RPS drilling on an SAC. Yesterday afternoon, Shells drilling work on the SAC known as the Glengad Bog Complex was successfully halted and Shell (& RPS) were forced to remove their equipment from the area. For the past 3 days Shell had been drilling test bore holes in the area surrounding Rossport Solidarity Camp.

At around 1.30pm yesterday a small group of locals approached where the drilling was going on and sought from the workers the permission they had to drill on the SAC. There was a portacabin, 2 trailers, 2 jeeps and the drilling machine inside temporary fencing along with about 10 workers around the site. An RPS employee told the group that they believed they werent on the SAC and that the maps they had received from RPS showed they werent on the SAC. She admitted that they didnt have permission to drill the bore holes on the SAC. Vincent McGrath then showed her the maps he had from the National Parks & Wildlife Service (NPWS) which showed that they were in fact on the SAC and that they would have to stop theyre work. He informed her that in-order to drill bore holes on an SAC, the permission of the Minister for the Environment was needed and that until this permission was produced no further work would be allowed to proceed.
There was then about an hour stand-off in which no work was done until the gardaí arrived. Once about 20 gardaí had arrived at the scene, the new superintendent for Belmullet John Gilligan went over to the workers and told them to start up the machines again and continue with the work. He then proceeded over to the protestors where he was informed of the situation regarding the SAC, and that illegal work was being carried out. He basically said that he didnt care about any of it and warned the protestors that if they didnt leave the area, they would be removed. The protestors said that they wouldnt leave and that if they were doing something wrong then they should be arrested. Supt. Gilligan then said that the protestors had 5 minutes to consider theyre options following which they would be removed. He then retired back to the group of gardaí that were on one side of the fencing. After about a minute the gardaí began surrounding the temporary fencing, however before they could close off access, a member of Rossport Solidarity Camp jumped over the temporary fencing and climbed the drilling machine. This seemed to take the gardaí by total surprise and it took them a few minutes to regroup while the workers turned off the drilling machine. It also changed the focus of the gardaí, with the gardaí now trying to coax down the climber instead of trying to forcibly remove the protestors.
On a few occasions, Supt. Gilligan asked the climber to come down because of safety to himself, but the climber said that he felt in no danger. After about a hour, Superintendent Gilligan told the protestors that if the climber came down then the equipment would be packed up and removed from the site. Vincent McGrath then succeeded where the guards had failed in talking down the climber. I believe it is a sign that the gardaí knew they are on shaky legal ground, that the climber then was allowed to rejoin the group of protesters without ever even being cautioned by the gardaí.

It should be pointed out that for the last two mornings, the gardaí have removed protestors from the gates leading to the drilling site even though it has been pointed out to them that the drilling is going on illegally in an SAC and also that the road that is being used down to the shore doesnt have planning permission. Last week, 3 locals also stopped Shell from drilling on a right of way in Rossport that is about ½ mile away from any of the 3 remaining proposed routes. This again shows that Shell and their stooges believe they can get away with anything they like and they would too only for the commitment and strength of the people who wont let their community be turned into a Shell fiefdom.

Climber on the drilling machine

Clearing out the drilling equipment

http://www.indymedia.ie/article/84782
Indymedia Ireland is a media collective. We are independent volunteer citizen journalists producing and distributing the authentic voices of the people. Indymedia Ireland is an open news project where anyone can post their own news, comment, videos or photos about Ireland or related matters.