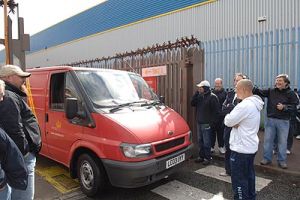 From June to mid-August, postal workers in the North and in Britain were taking industrial action. Management are on the offensive, and the action was to protect existing conditions.

In a display of cross-border common purpose An Post bosses are also having a go, with conditions under attack as a prelude to selling off parts of the service to private companies. So, An Post workers have a special interest in how the Communications Workers Union dispute progresses

On 10th August, Royal Mail agreed to talk, and the CWU suspended strike action pending the outcome of negotiations. A Work-to-Rule continues, and will continue to cause disruption to the post. If the talks dont deliver for the workers, strike action will have to be resumed and escalated. Anything less will be seen as weakness by the bosses and will encourage them to seek even more concessions from staff.

One Royal Mail worker gives her views:
The strike occurred in to protect working conditions, can you describe the changes that were threatened?

Early in 2007, Royal Mail unveiled its Business Plan, which included unpopular later starting times, Team-Working, which means covering for staff on holiday or off sick with unpaid overtime, Summer Lapsing which means five staff covering six duties during the summer months (and which will no doubt lead to it being an all year round exercise, thereby losing another 40,000 jobs), closing the pension scheme to new employees, (a leaked document has shown there are insufficient funds in the pension plan due to Royal Mail deciding to withhold payments for a number of years) and delivering leaflets for no extra payment.

Royal Mail say that these measures and more must be agreed to before any pay rise will be granted. An offer of 2.5% on basic pay equates to £8 per week, but staff will lose £12.50 per week by agreeing to later starting times. The offer is a pay cut however it is viewed.

What was the reaction of the workers?

In June, the membership delivered an overwhelming decision in favour of strike action, the significance of which Royal Mail attempted to play down. However the first strikes have seen massive support with very few scabs turning into work. After the first strike, Royal Mail claimed 60% of staff worked normally, but this was proved to be false.

In a desperate attempt to undermine the strike, a manager repeatedly drove a Royal Mail minibus with blacked out windows through a picket line to give the impression of people wanting to work whenever a camera from the local media turned up.

Since the strikes began, more and more delivery office staff have chosen not to perform unpaid overtime before official start times and are refusing to use their own cars to transport themselves and their mail to their deliveries. Both practices are responsible for job losses. Managers in offices where this is taking place have been unable to cope with demand for vans and have been delivering mail which has been left or brought back by staff unable to complete delivery in the appointed time span. Workers have become sick and tired of being bullied by power-tripping managers manner and are fighting back the best way they can.

What are the usual relations between staff and employers?

When Tony Blair appointed Allan Leighton as Chairman of Royal Mail in March 2002, he was already on the boards of nine other companies, had sold Asda to the anti-union Wal-Mart supermarket chain and was in the process of the transforming Leeds United Football Club from Champions League contenders to relegation certainties and ultimate bankruptcy. Allegedly he receives a basic salary of a £800,000 per year.

Leighton is fond of referring to the employees of the companies he has anything to do with as our people, an annoying habit which along with referring to recipients of his many propaganda letters by their first name and signing off with Regards, Allan, he imagines gives him a matey persona.

He introduced to Royal Mail the idea of huddles, an innovation he brought with him from Asda. Embarrassed managers would call together a few workers to discuss issues around the job. Staff quickly dubbed these meetings muddles when it became clear managers had little idea of the duties they were supposed to be in charge of and simply refused to participate in them.

Obviously Leighton had not been used to dealing with a large, highly unionised workforce made militant by many years of bullying management and a series of CWU General Secretaries who seemed almost as out of touch with the workers as Leighton himself. In 2003, the CWU lost a ballot on pay by a mere 1,600 votes and Leighton, Crozier and just about every manager under them thought the result gave them licence to impose team-working and four hour delivery spans.

The culture of bullying and harassment from managers increased, leading to unofficial industrial action in many large towns and cities which forced Royal Mail to the negotiating table. Leighton gave up referring to activists in his letters to staff as it was obvious the activists made up a sizeable majority of the workforce and his divide and conquer tactics had failed.

The biggest fear now is that of being let down by the leadership of the Communications Workers Union. This is always a possibility while those at the top of the CWU are enthralled by the notion of a link with the Labour Party. If ten years of Labour looking after the interests of big business and trampling on the working class have taught them nothing, perhaps the near total silence from the party they help fund on this latest battle might.

Related Link: http://www.wsm.ie
http://www.indymedia.ie/article/84107
Indymedia Ireland is a media collective. We are independent volunteer citizen journalists producing and distributing the authentic voices of the people. Indymedia Ireland is an open news project where anyone can post their own news, comment, videos or photos about Ireland or related matters.