Averting our eyes from Crime at Tara

by Terri Dale - Save the Hill of Tara 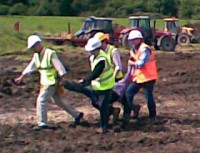 How legal is this?

While an MEP explains the doubtful legality of the construction work taking place at Tara, Revolt Video get the workers on film, engaging in activities of even more doubtful legality. The guardians of the peace wade in and arrest 7 protestors, including a professor of specializing in Medieval Irish Studies at the University of Maynooth who had presented them with a letter from the EU commission.

As a rumoured additional 20 diggers are told to be arriving onsite, the public step up their protest in protecting Soldier Hill, attracting the likes of University Professors, International delegates on Tourism and EU Member of Parliaments to rush to the scene in aid of the protest.

Between 10am and 2pm a bitter struggle ensued to try to stop the diggers from continuing, as the protestors also disrupt traffic by standing in front of dirt trucks that try to enter the site.

By 12:30pm at least 5 people were arrested for obstructing the construction,

By 12:30pm at least 5 people were arrested for obstructing the construction, including Muirfeann Ni Bhrolchain, a Professor specializing in Medieval Irish Studies at the University of Maynooth. She had arrived on site with copies of a letter from the EU Commission, proving that "the European Court of Justice has recognised the decisions to approve project may unfold in more thant one stage and that it may be inappropriate to limit the possibility of EIA to an early stage as as new circumstances and new factors may arise at the time of a second stage decision" and that in the discovery of LIsmullin, " the National Monuments Act, 2004 makes no provision for (second stage) EIA in relation to decisions allowing for destruction of national monuments that were unknown at the time of a first - stage EIA."

This was handed out and even presented to a member of the Guards, which was taken and put in his pocket.

Just after most of the arrests had been made, EU MEP Cathy Sinott rushed straight from the airport to survey the scene, explaining to all that Ireland is currently in court with the EU over this recently discovered national monument in which lies in the clear paths of the diggers, and of which all work should be ceased until the matter is resolved which should be in about 2 months. Soon after national news such as TV 3 and Newstalk 106 were taking interviews with Cathy and also other protestors. Cathy explained to TV3 that because of these circumstances, the construction was indeed illigal and made an appeal for the Minister to cease operations immediately.

1 Protestor was also taken to hospital for a torn arm ligament after being wrestled to the ground in an attempt to block a dirt truck from entering the site.

Protestor Being carried off site trying to stop digger

Dan Malone stops digger by standing on it

Muirfeann Ni Bhrolchain, Professor at NUI just prior to her arrest

Protest Signs after construction decide to cease for the day

http://www.indymedia.ie/article/83495
Indymedia Ireland is a media collective. We are independent volunteer citizen journalists producing and distributing the authentic voices of the people. Indymedia Ireland is an open news project where anyone can post their own news, comment, videos or photos about Ireland or related matters.