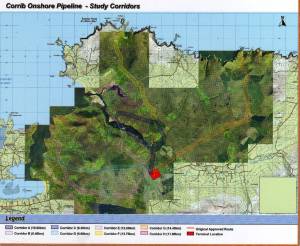 New pipeline routes
On Tuesday 12th June, the day after police brutally forced an illegal portacabin onto private land through crowds of protesters near Pollathomais, Rural Planning Services (RPS) announced the eight new possible corridors for the Corrib gas pipeline. RPS are the company subcontracted by Shell to find a new route for the controversial pipeline promised in the aftermath of the Cassells report. The selected route corridors were unveiled at a reception and open evening in the Broadhaven Bay Belmullet. The route unveiling was well attended by Shell to Sea campaigners many wearing clothes torn by police at the face off on Monday, underlining the fact that while Shell and their partners claim community consultation ultimately they will use force courtesy of the Gardai to push their project through.

Campaigners reiterated their opposition to the Corrib project in its current configuration. They pointed out that the idea that the pipeline route is the sole problem is a product of the project splitting mentality that has marred this project from the outset and that the recommendation of rerouting of the pipeline as a solution to the Corrib conflict comes from the flawed Cassels report.

Shell to Sea campaigners brought placards and a banner reading stop before its too late into the RPS reception. Protesters unfurled the banner across the hall and called on everyone opposed to raw gas in Erris to get behind the banner. The room was quickly divided into a mass of people behind the banner chanting Shell to Sea as a handful of RPS personnel looked on. Having made their point protesters left the hall together to chat outside.


Campaigners up in court
Campaigners were back in Belmullet on Wednesday morning for the sitting of Belmullet district court. Those who were up included Mr John Monaghan of Rossport for charges relating to two alleged assaults on a Garda; five campaigners who stopped peat haulage for 5 hours on Tuesday 5th June using a lock-on on charges of breach of the peace, obstruction and failing to obey the orders of a Garda; Mr Ed Collins for alleged assault of a Garda on 10th November last; one campaigner on charges of dangerous parking and three others on charges relating to alleged intimidation. Mr Niall Harnett was in court to bring charges of assault, theft and destruction of property against Sgt. Butler, Inspector Robinson and Superintendent Gannon. All the cases bar Mr Harnetts were adjourned , the bulk of them to the 11th July.

Also present were large numbers of Gardai, over twenty in uniform with the three facing charges in suits. Garda MY72 thought it necessary to bring a baton into court. When an elderly lady sitting next to him playfully slid it out of his pocket he reached for the baton on reflex before muttering something about the baton being an item of uniform and generally getting quite flustered.

Niall Harnett v Sgt. Butler, Insp. Robinson and Supt. Gannon.
Niall Harnett had summonsed Sgt. Butler, Inspector Robinson and Superintendent Gannon who were represented by Liam Guidera. Mr Harnett asked the judge for latitude and patience given his lay status. Problems arose with the summonses served by Mr Harnett on the three Gardai. The summonses had not been filed with the registrar within the four days required but only the night before the court. Mr Harnett appealed to the discretion of the court to allow the summonses to be entered into the record of the court on that day.

Liam Guidera, solicitor for the defendants responded by questioning Mr Harnetts motivation. He presented the judge with a compilation of Indymedia articles written by Mr Harnett and described him as having a position of authority with regards to the site. Mr Guidera proceeded to make representations to the court that Mr Harnett was abusing the processes of law by "inflamatory, defamatory and contemptible" comments against Gardaí on Indymedia. Mr Harnett responded to Mr Guidera's submission, by defending and standing over any Indymedia articles and comments that he make, saying that his motivation in writing such articles is simply call the Gardaí to account and to empower people to stand up to abusive Gardaí.

The matter was then raised of a letter that Mr Harnett wrote to Supt. Joe Gannon to say that should he or the other 2 Gardaí involved, wish to return the camera or its damaged parts to Mr Harnett, then he would make an application to Belmullet District Court on June 13th to have all three charges dropped against them. Judge Mary Devins gave this ruling where she described the letter as

"most definitely an interference in the prosecution, a taint of the process, using the court as a tool, and perhaps a weapon, that the prosecutor Mr Harnett in this case can take up and drop as he sees fit. If a Guard had issued proceedings in a criminal case and in the course of evidence I heard that that Guard had gone to the accused and had said that 'if you do such and such a thing, I will not enter this summons, or if you apologise I will not continue this prosecution', and that person refused to reply and the Guard then entered the summons, and I was given that evidence in court then I would most definitely consider that the prosecution was thereby fundamentally tainted and flawed. I would consider it an abuse of the process, an abuse of the administration of justice and an abuse of the district court. Because of that letter I cannot entertain the summonses, and so they are not before the court, and I have no further comment."

Delays at Bellanaboy
Delays were caused this morning for trucks involved in the transport of peat from the proposed refinery site at Bellanaboy to the Bord na Mona facility at Sramore due to the presence of protesters on the haulage route. A crowd of Shell to Sea supporters blocked the path of trucks for approximately 20 minutes as Gardai attempted to move them along. A resident of the Solidarity Camp was dragged from his vehicle after attempting to drive onto the haulage route and finding the way blocked by a crowd of protesters and Gardai. Several Gardai entered through the back door of the van and attempted to drag him from the vehicle in a headlock, forcefully and deliberately striking the camcorder he had taken out to film the incident. Eventually he was removed from the vehicle which the police drove a few metres down the road and parked. They initially refused to return the keys until he produced his documents (which would have proved difficult, seeing as they were locked in the van) but relented after an hour. Another young local managed to climb on to a peat truck but was quickly removed.

http://www.indymedia.ie/article/83016
Indymedia Ireland is a media collective. We are independent volunteer citizen journalists producing and distributing the authentic voices of the people. Indymedia Ireland is an open news project where anyone can post their own news, comment, videos or photos about Ireland or related matters.