A Most Amazing Henge - Lismullin

by Muireann Ni Bhrolchain - Campaign to Save Tara

We told you so! 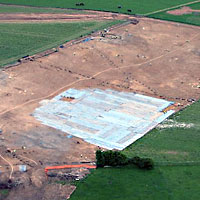 Experts had warned for years that the M3 should never have been routed through the Gabhra (Tara-Skreen) Valley.
What we refer to today as a henge are two related architectural forms that come from the late Neolithic and the early Bronze age. They date from about 2500 to 1800BC and may consist of banks, earth enclosures and also timber circles and that is what we have in this case. Rath Medb at is an example of the earthen enclosure. The best known henge is of course Stonehenge.

We told you so!
To explain the images: the two aerial shots were taken April 24th by Paula Geraghty for the Campaign to Save Tara - the area covered by blue plastic is the henge - the rest of the site in outside the road take and is on private property.
The other three images (below) come the website of Meath County Council.

The background
As far back as 1999 the NRA received advice from V.J. Keeley Ltd. in the document Archaeological Assessment Paper Survey, Preliminary Area of Interest N3 Dunshaughlin North to Navan West, Co. Meath. This said:

In addition to being highly visible from the Hill of Tara, the route passes through the archaeologically sensitive landscape of the stream valley (ibid., 6.5.1.). No mitigation would remove the effects of this route on the Hill of Tara or on its outlying monuments. It would have extremely severe implications from an archaeological perspective.

Then they were warned by Margaret Gowen Ltd. who said:

The monuments around Tara cannot be viewed in isolation, or as individual sites, but must be seen in the context of an intact archaeological landscape, which should not under any circumstances be disturbed, in terms of visual or direct impact on the monuments themselves (N3 Navan to Dunshaughlin Route Selection, August 2000, paragraph 7.3)
The same company advised the route selection company, Halcrow Barry:

It would be virtually impossible to underestimate the importance or the sensitivity of the archaeological and historical landscape in this area (Margaret Gowen and Co. Ltd., N3 Navan to Dunshaughlin Route Selection: Archaeology, August 2000, 3.1).

The Environmental Impact Statement said: this section of the N3 runs through one of the richest and best known archaeological landscapes in Europe. (Vol.4A p.165). Conor Newman, expert on Tara warned on one occasion that the NRA would be: tip-toeing through monuments and moving whack into them.

Now the discovery, and further the declaration, of a National Monument at Lismullen vindicates those who campaigned for so long on this issue and said that sites in the Valley were related to Tara. There are other massive sites that have been discovered and downplayed by the NRA archaeologists and they will attempt to do the same with this one  just watch. Baronstown, Collierstown and Dowdstown should all be declared National Monuments  but of course the whole area is part of the National Monument of Tara.

What is a henge?
What we refer to today as a henge are two related architectural forms that come from the late Neolithic and the early Bronze age. That means from about 2500 to 1800BC and they may consist of banks, earth enclosures and also timber circles and that is what we have in this case. Rath Medb at is an example of the earthen enclosure. The best known henge is of course Stonehenge. There are both stone and wood henges and Lismullen is a wood henge. Stonehenge was built with wood before the more permanent stone structure was put in place. The timber circles can be quite different; there may be huge posts as was the case on the top of Tara or much smaller, slimmer ones as is the case with Lismullen. They can have multiple concentric rings as well single rings of post. Double rings appear to be more popular. But this one is, according to expert opinion, architecturally unique and it is middle-range size. The majority of henges in the world are found in Ireland and England. It can be seen from the diagrams produced by the NRA that there are three circles here, two large ones close together and a third, the inner sanctum, that is much smaller.

One of the oldest henges ever found is also in Meath, at Raffin Fort and this dates from c.3100BC and this was excavated by Conor Newman. Ireland is different from England in that these structures continued to be used well into the Iron Age and the latest timber circle is also found at Raffin, Co Meath and this dates the fifth century. This is the period of the arrival of Christianity to Ireland and it is significant that this henge was built at that time.

The Lismullen henge
What is particularly interesting about the Lismullen site is the description of the funnel-shaped entrance avenue that is a feature of early Iron Age ritual enclosures in Ireland. Similar examples are found at all the other important kingship sites in Ireland: Dún Áilinne (Kildare), Emhain Mhacha (near Armagh) and Cruachain (Connacht) and of course at the henge on top of the Hill of Tara. These are the primary ritual as well as the primary kingship sites of Ireland.

The site has been described as quite amazing by a leading authority. Conor Newman said in a press release issued on May 4 2007 by the Campaign to Save Tara: This is a monument of major significance. It compares with Iron Age monuments found at the related royal sites of Emain Macha and Dun Ailinne, and a discovery of this magnitude in a landscape so heavily invested with ceremonial monuments was predicted from the start. The view expressed on MCC's website report that its position beneath the ceremonial complex on the Hill of Tara suggests that it may have served 'smaller or lesser political units' that might somehow have been skulking around the fringes of Tara is frankly asinine.

The maps and other documents associated with this discovery can be seen on the Save Tara website under downloads and on the Meath County Council site.

Part of the Tara complex
Those who are expert in this area and in the area of Tara are of no doubt that this ritual site, really a temple, is part of the extended Tara complex. It is about 500metres from the area of Rath Lugh also flagged as being under threat of the motorway. This is the place about which there was such a furore in January. In the same area already flagged are a barrow and a souterrain. The NRA is trying to fit the road between these monuments  this was shown in photographs in the past.

This point in the Gabhra Valley is the entrance to Tara. It was more or less expected that a henge would be found in this location. They are usually associated with Passage Tombs. Conor Newman and Joe Fenwick recorded the existence of a straight line of Passage Tombs running from the river Boyne southwards right through the Gabhra Valley and up to the top of the hill. The Mound of the Hostages is surrounded by a henge also, this is 200metres in diameter and is much larger than the Lismullin Henge that is 80metres, still a very large area. These two henges are about the same distance apart as Knowth and Dowth are from each other. No one would doubt that the latter two are related to each other.

It is no accident that this henge is exactly where it is. The fact that Rath Lugh is situated at this position is no accident either. This tells us that from the very earliest times this area was considered as an integrated, cultural landscape and this continued right into the early medieval period.

The original dots on the maps are now extremely misleading as the sites expanded to such an extent that they are nearly backing one onto the other. The Lismullin site is nearly as far as Rath Lugh and the henge itself is approximately 500m from the Rath.

The Gabhra Valley
The Gowra (Gabhra) Valley lies between the Hills of Tara and Skryne. The valley is criss-crossed by little brooks fed by the springs around Tara and the Gabhra is one of these streams. The word gabhra comes from the word gabhar/gobhar that in Modern Irish means goat. But in the older language (c. 900) it also meant horse and especially a white mare so the name of the area translates as the Valley of the White Mare. The word appears in many other place names for example Ráth Gabhra. But the location is this place is unknown. Maybe this is what is now known as Rath Lugh? There is no reference to this place in early sources.

The famous Fianna had a battle in this area, known as the Battle of Gabhra. They were wiped out in the cataclysmic conflict. They fought the king of Tara, Cairpre the son Cormac mac Airt who was killed along with them. It is said in story and poetry that they were buried at the battle site along with the king of Tara.

For more information on the Gabhra visit the history section of the SaveTara website www.SaveTara.com

Lismullin site with Rath Lugh in the background

Closer view of the area

Details of the henge site

http://www.indymedia.ie/article/82427
Indymedia Ireland is a media collective. We are independent volunteer citizen journalists producing and distributing the authentic voices of the people. Indymedia Ireland is an open news project where anyone can post their own news, comment, videos or photos about Ireland or related matters.