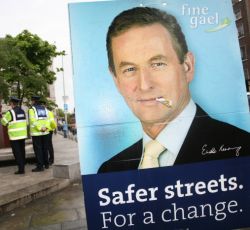 The streets will never be the same again

Funnily enough the march was delayed as the organisers needed permission from the police to march down. The same Garda joked that they should have brought sniffer dogs. A kid who joined the march who was being photographed, said "I don't even smoke that shit"

There was a Father Ted moment or 5 when 'Ghost Town', by The Specials, was played over and over. Lot's of young (and some not so young!) chanted loudly "We're Not Criminals" and "Free the Weed".

There was a Labour Youth Banner and speaker at the very end, whose brevity was very welcomed after Ming of Roscommon fame, presented a rather academic, articulate and thorough defense for the uses of cannabis. He also outlined the personal cost that he has borne campaigning for the decriminalisation of cannabis. There were anarchists, socialists, republicans, nationalists, Irish, Catalan and Basque all taking part. The event had more of an air of the annual Gay Pride Parade. The representative from Labour Youth gave said that LY was committed to decriminalisation of cannabis.


For another take on the event please look this this

http://www.indymedia.ie/article/82410
Indymedia Ireland is a media collective. We are independent volunteer citizen journalists producing and distributing the authentic voices of the people. Indymedia Ireland is an open news project where anyone can post their own news, comment, videos or photos about Ireland or related matters.