Commemorating the women in the struggle 1916-23 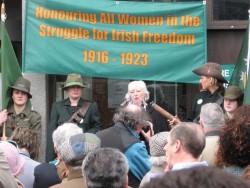 On Monday in Dublin, a local history group organised a commemoration of the brave women who fought alongside the men in the fight against British rule and the establishment of the Free State.

The march was led by a colour party of women wearing the uniforms of Cumann na mBán and the Irish Citizens Army and photographs of many of the women were carried on the march. After being erased from the historical record for many years (literally in the case of Elizabeth O'Farrell) the women of the 1916 to 1923 period of Irish history are starting to be recognised once again for the important role they played in the struggle for Irish freedom.

Women have always played an important role in the movements for Irish independence and the social struggles associated with them. However a hundred years ago, as events began to unfold which led to the Easter Rising of 1916, the war for independence, and the civil war, in many cases they played a decisive role. This was not just in terms of numbers, but also in quality of leadership, motivation and commitment.

Today's event reminds us that we should respect the influence women have had in Irish revolutionary history, and remember them with great regard.It is hoped that this commemoration will become a regular event in the Dublin calender.

Setting off for the GPO

Speeches at the GPO

The event started with the flag raising at Liberty Hall followed by march to GPO where there were speeches in memory of the Republican women active in the period 1916-23 and presentation of replica Cumann na MBan badges to women active in the community of the North Inner City today.

Crowd at the GPO

We did liberty Hall too.

Where were you last year when we endured a military parade?

Nobody holds a monopoly on Irish history..

Yes, some of us remember the women of 1916. The broader public don't, I don't think yesterdays comm. was an attack on anyone on the left about forgetting the women of Easter Week!

Where were you? comments don't help to be honest, any and all commemorations should be welcomed.

It's not about you and your friends for once

The photos at the top show a genuine community based event with a broad cross section of people from the north inner city and beyond. The photos just added show a small group of eccentric people doing something that involves black shamrocks, and has no community involvement or base in the wider population.

One event was sincere and dignified, the other was done for its own sake, as a kind of prank.

To try and criticize the folks who organized yesterday's event because they didn't get involved in your stunt last year shows a lack of maturity, and a desire to draw attention to yourself and away from others which is sad to see.

Where was the commemoration of James Larkin, Countess Markievicz, and James Connolly, the great Marxist without whom the link of nationalism and the common citizen would never have been made. When he was shot alongside the IRB, the Brits shot a labour union worker, and so helped condem themselves in the eyes of evey socialist in Ireland and Britain.

For decades the IRB had a view to their goal, but only found the gaol, through the land league they found their first link to the Irishman, and got him into the habit of home-rule; but that was not enough. The IRB needed socialists; and what better than the Irish Unions; and their defence force the ICA.

Without socialism there would have been no Ireland.

May the nurses gain their victory; for those sick in hospital today; will benefit from their victory in years to come. Ireland needs more nurses; not too few doing too many hours.

very good commemoration but, who placed the wrath in center of picture with the Italian colours

That is the official "Irish government" wreath.

Bertie put it there, Its still there but the two outer ones are gone.

Just a query did you have any posters put up advertising the event ?

it's very cool, that is it would be very cool, lao says that because if this means that maybe somehow people are starting to really commemorate this rising, that would be cool.

¿Do you know in other countries they ask about irelands national days, of independence? of commemoration? of remembering heroes? But no, there is no day no memory, IRA only bad bad, although maybe there is a national day about some twisted f**k who brought the worst of dogmatic f**ked up religion to the island of fairies.

For whatever happened afterwards, making one glad maybe that those dead revolutionaries didn't live to see the failure, the revolution is still young! Remember, remember is not over, ha ha, even here it is not possible to have more than 3 comments before some faction fighting breaks out. revolution very young.

REVOLUTIONARY WOMAN OF IRELAND
'They are at once the boldest and the most unmanageable of revolutionaries.' Eamon de Valera

by Ghandi of North Strand - None

Member of GPO Garrison 1916, Cumann Na mBan, initially posted to The Imperial Hotel (now Clery's)
then assigned to the GPO,

She was then sent up to the Pro Cathedral, where a field hospital had been set up, to take care
of the many wounded brought there.

Whilst in Kilmainham she fell in love with Michael Murphy, from Glasnevin, who was Officer in Command, A Company, 2nd Battalion in
Boland's Mill he subsequently was Captain C Company 3rd Batallion Dublin Brigrade Oglaigh na H-Eireann.

They married on the 21st April 1918 and moved to 1 Leinster Avenue, North Strand, where they had 19 Children.
Both continued their involvement in the defence of the Republic.

There are two survivors of Martha and Michael,

Marion who subsequently married IRA leader Leo Steenson (RIP) from Belfast in 1962 and celebrated her 80th Birthday last month
has lived all her life in 1 Leinster Avenue, North Strand and joined Cumann na gCailini at the age of 10, subsequently joining Cumann
na mBan at around 16 and staying a member until the late 70's.

The Murphy family were heavily in Republician and Trade Union Politics over the years, with many of the members being jailed or
interned over the years.

Both Michael & Martha were awarded 1916 medals and War of Independance medals for active service and both appear in the 1936
photograph of survivors of the 1916 Garrison a copy of which hangs in the GPO.

Despite her 80 Years Marion attended the event along with other family members, and welcommed teh fact taht at last some one was
honouring the women who gave so much and were forgotten.

by Ghandi of North Strand

by ghandi of north Strand

Thanks for remembering these women.

http://www.indymedia.ie/article/81885
Indymedia Ireland is a media collective. We are independent volunteer citizen journalists producing and distributing the authentic voices of the people. Indymedia Ireland is an open news project where anyone can post their own news, comment, videos or photos about Ireland or related matters.