The Union of Students in Ireland: The Dog That Won't Bark 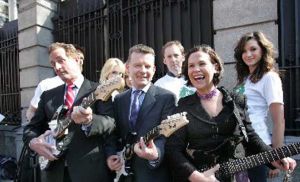 In advance of the annual USI Congress, Red Wedge previewed proceedings with an article "What is to be done with the Union of Students in Ireland?" In this article, he offers an eyewitness an account of the event and some thoughts on the future of the student movement.

Its the first night of the congress. There is a hustings debate taking place between the two candidates for the presidency of the organisation. UCCs Richard Maurice Roe and the Eastern Area Officer of the organisation John McGuirk are going head to head.

When the votes are counted on, it is Maurice Roe who is the clear winner. McCuirk polls 62 to Roes 85. The re-open nominations candidate option receives the support of 46 delegates.

The first really contentious motion has been put to the congress by the Waterford IT student Union. The motion proposes to mandate "The (USI) Welfare Officer to to re-establish links with MEAS and work towards promoting safe and sensible drinking amongst students". Delegates warn about the dangers of receiving sponsorship from this drinks industry funded body. One delegate says that MEAS is a "PR scam, a PR sham". Another argues that the department of Health and other pubic bodies ought to take responsibility for funding such campaigns. Despite these concerns, the motion is passed.

The debate concerning USIs relationship with SIPTU is the most ideologically charged of the week. The debate concerns the partnership arrangement in place between USI and SIPTU. A motion from Trinity Students Union asks that "USI cease its current relationship with SIPTU" and for the "USI Officer board to develop relationships with IBEC so that COs (Constituency Organisations) are offered necessary employment rights protection and information". The motion also proposes that "SIPTU often have a different set of interests to COs". This motion is proposed by the Trinity SU President. It is his only appearance on the platform all week.

Student union president after student union president line up to attack trade unions. The head of DITSU limited complains about SIPTU. So to does the head of NUIGSU who insists that the matter is not "about left and right". Former NUIGSU and USI President Tony McDonnell has a similar argument to make. He contends that the motion is "not about politics but a practical manner". The arguments are met with stiff opposition. Delegate's point out the Solidarity SIPTU and other Trade Unions have offered the Student movement in the past. They point to the practical benefits of the relationship for Students in the work place. Enda Duffy from the UCD delegation says the choice is clear. The choice for delegates is to see the Union of Students in Ireland as " a representative organisation, not a business". Delegates vote to pass the motion.

As Red Wedge predicted in advance of the conference, many worthy motions are passed, but there are few proposals for action. The debate on emergency motions that takes place on the final day of the congress offers some solace for students who seek a movement that engages in campaigns and seeks to have an impact on society through engaging with students on the ground. The congress votes to back UCDs motion in support of the Students against Climate Change march that takes place on Friday the 13th of April at one o'clock outside the Dáil. Delegate's also back a UCD motion in support of the campaign to shut down rogue pregnancy agencies.

USIs industrial relations difficulties have been covered elsewhere on Indymedia. However, debate on this matter is ruled out of order by the standing orders committee who Chair the Congress. An emergency motion from UCD-proposing that the Congress support the rulings of the Labour relations commission and affirm support for basis of labour law-is not accepted by the steering committee.

Despite the decisions of the congress, Red Wedge remains positive and optimistic about the future. There is evidence to suggest that many of the student union leaders are out of touch with the grassroots. Consider this contrast: Trinity students recently gave an increased mandate to their unions boycott coke campaign in a campus wide referendum. Yet they were represented at the congress by a delegation who proposed the most reactionary motion on the agenda-the motion to break the link with SIPTU.

The challenge must be to engage with the issues that effect students on the ground, build up a campaigning culture and convince students that change can be brought about if people organise. There must also be a pivotal role for engagement with issues that concern the place of students in the wider world if the student movement is to realise its full potential.

http://www.indymedia.ie/article/81860
Indymedia Ireland is a media collective. We are independent volunteer citizen journalists producing and distributing the authentic voices of the people. Indymedia Ireland is an open news project where anyone can post their own news, comment, videos or photos about Ireland or related matters.