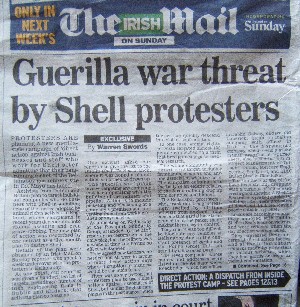 Camp gets fake infiltration treatment from Mail on Sunday

In new twist, campaign is now found 'guilty by dissassociation'

Last weekend saw the mainstream media continue its barrage against the Shell to Sea Campaign by selling the line of nasty outside protesters corrupting innocent, misguided locals. With radical activists joining the local community for the long haul, the Rossport Solidarity Camp's long-term presence has reduced the impact of these smears, so an article targeting the camp is a welcome development for both Shell and its Government.

The prize for being first to publish the by now traditional fake infiltration story goes to the Mail on Sunday. While the muck-raking tactics are often the same, (they 'infiltrate' an open group) by sending along a young journalist pretending to be someone who cares, this case is interesting because the journalist they hired was one Warren Swords who had written articles critical of Shell and their activities in Nigeria.


This weekend saw the mainstream media continue its barrage against the Shell to Sea campaign. The Sunday independent, Sunday Times and Sunday Tribune were amongst those who attacked the campaign. The Sunday Independent personalised the issue with an attack on independent Mayo T.D. Jerry Cowley. His surgerys collective income was selected from a list of hundreds of Doctors salaries to be singled out for attack despite being forty-fifth on the list. (This attack linked the campaign and Dr Cowleys surgerys collective salary. What this has to do with the shell to sea campaign is perplexing).

The Very Intrepid Journalist
One of the most vicious and personalised attacks appeared in the Mail on Sunday. The Mail on Sundays journalist Warren Swords or Ross as Rossport Solidarity Camp knew him, allegedly infiltrated the camp and proceeded to write an article attacking the camp based on outright lies, guilt by association and insinuation.

On Friday (the 17th of Nov) a man who called himself Ross arrived at the camp and was enthusiastic about the campaign claiming to be motivated by the recent police brutality. He left the next day. He returned on Monday (the 20th of Nov). Like everyone who comes to the area expressing an interest in the campaign he was welcomed onto the camp. We found him an amiable person. He left on Thursday. The next we heard of Ross was when we saw the article in the Mail on Sunday written by Rosss alter ego Warren Swords.

The Facts
The article was primarily based on outright lies. First of all, at no point did Mr. Swords admit in the article he gave a fake name and lied about his true identity. Secondly he implies he infiltrated the camp. This is impossible. To infiltrate something implies that the organisation is secretive and closed. Rossport Solidarity Camp is an open camp. All are welcomed as long as they abide by the camp guidelines such as no drinking on site, no individualist actions etc.

The thrust of the article was also based on insinuation and guilt by association or disassociation as the case may be. The story opened on page two under the headline Guerrilla war threat by Shell protestors, it continued on page thirteen and fourteen under the banner of Are you up for Direct Action? It even gained a mention in the editorial under the caption of Finish the protest. In total the story occupies over two full pages.

On page two readers were treated to the escapades of Mr Swords in his time undercover in Rossport. He opens his expose against the camp saying that we are going to launch a similar style attack on Shell as was waged by the SHAC campaign against Huntington Life Sciences- an allegation which is baseless and without truth. The attack opens ironically by acknowledging the non-violent nature of the camp but still goes into enormous detail of the Huntington life sciences campaign. The link between the Shell to Sea campaign and the campaign around Huntington Life Sciences is unknown to everyone with the exception of Mr Swords. Its relevance to Rossport is still baffling; he starts by distancing the camp from violence but presumably in an attempt to find guilt by association or in this case guilt by disassociation he writes about it extensively anyway. The link between the SHAC campaign and Shell to sea is imaginary.

Guilty by Disassociation
This tactic of guilt by disassociation continued in the second article on page fourteen. Mr Swords cunningly asked the camp what about Michael McDowells assertions of the Provisional IRAs involvement hoping to get a scoop. When he received the sarcastic answers of bollox if the Provos were involved wed be better organised Mr Swords was no doubt disappointed. This did not stop his sub-editors continuing an attempt to damage us by association with the IRA by highlighting this quote. At this stage it is needless to further refute the allegations of IRA hijacking. If anyone reads the Sunday Independent, they will be aware that according to the Mass Media there isnt anything or anyone (except maybe Michael McDowell) in Ireland that isnt under control of the Republican Bogeyman in the form of the IRA.

The editor even joined in this angle of attack. In the editorial under the Finish the Protest caption it is acknowledged that we are peaceful but they decide to have a go anyway in a train of thought along the lines ah sure what the hell; they could in a parallel universe so they will. The logic of this is hilarious. Its like saying some people are violent therefore all will probably be violent. They seem to be operating of the principle of guilt until proven innocent.

Mr. Swords second major front of attack was insinuation. The headline of the article on page fourteen is Are You Up For Direct Action? The insinuation was that direct action is something bad. Anyone who has ever gone on strike, supports Gandhi or the Dunnes stores strikes against apartheid will know direct action is nothing to fear. Presumably at best Mr. Swords does not understand the term and at worst intentionally misrepresents it in an attempt to fabricate a story out of nothing.

A common device in the article was to criticise the camps discussions that mentioned potential protests at sub contractors offices. He implies that this tactic is somehow very sinister. The tactic of secondary protesting is in fact an accepted form of protest. The highly popular Dunes Stores strikes against the apartheid regime in South Africa were a form of secondary protest. This illustrates clearly that any projects such as the Corrib gas project is not solely the responsibility of major partners such as Shell but in reality all companies must be held accountable for their involvement. You cant get off in court by saying, the robbery was his idea  I was only following orders.

Fantasy Journalism
Throughout the article there is also insinuation that Rossport Solidarity Camp is at odds with the community campaign in Erris. There is no evidence or quotes from the camp or members of the local Erris community to substantiate the claim. Ironically the only fact used about the camps relationship with the community is that a community campaigner gave people from the camp a lift to the picket. This points to the true nature of relations between the camp and the community  one of a collective struggle in solidarity with each other. Shell, the government and the media have at length tried to depict an image of a campaign divided between all the varying groups. Nothing could be further from the truth. Shell to Sea enjoys a healthy level of debate on tactics. (The media and Mr. Swords in this case tried to parallel debate with division; most people would call this democracy at work.)

The Solidarity camp is an integrated part of the community campaign and engages in action only with local support and participation. This is fact, far too boring a reality to make a newspaper article so Mr Swords fabricated a claim to depict the more sensational story of division and tension.

The article continues along the vain of insinuation when Mr Swords claimed that professional protestors from England are currently trying to hijack the campaign. This is based on the fact that two individuals arrived from England to show solidarity. Mr Swords totally misunderstands the Shell to Sea campaign if he honestly thinks two individuals could constitute a hijacking of the campaign. Incidentally these people have since left and are two people in a stream of many visitors the camp has had from all over the world coming to show solidarity with the community.

Another major insinuation is that the campaign is now over. We have apparently lost. This is encapsulated in the caption of the editorial Finish the protest. Firstly the fact that the Mail on Sunday decided we are worthy of two pages shows the campaign is far from over and the media are well aware of this. The media is desperately trying to manipulate facts as shown on the Primetime debate and the RTE/Irish Independent/Red pole published last Thursday evening. The media at this stage have to phrase questions so they get answers they want. Even then the Irish independent had to manipulate the results of their loaded questions to get the answers required by Sir Anthony O Reilly.

Primetime went as far as to exclude the most telling question in their pole, which was Do you support Shell to Sea in which a majority stated they did. If the campaign was over why is there still such a large Garda presence maintained at the gates of Bellinaboy and why is there such a high level of media interest?

In an absence of finding any evidence of wrong doing at the camp beyond possessing a library of one hundred and eighty books, Mr Swords launched into personal attacks. He attacked the personal appearance of those staying at camp. As with most personal attacks it descended into a farce when Mr Swords comments that one womens handwriting is childlike. He commented on the lack of a welcome despite the fact that he was fed, given a space to stay welcomed into our meetings and brought out socialising with people staying on the camp.

We at Rossport Solidarity camp arent surprised by the attack and are well aware that sections of the corporate media are far more able than Mr Swords to personally attack individuals and tell bare faced lies about the camp. However we are warmed by the fact we know the community of Erris are aware how low the corporate media will sink to attack people. Whilst this article has attacked individuals and the camp as a group our resolve remains as strong as ever and the camp will remain the open welcoming space we have always strived to make it over the past seventeen months.


http://www.indymedia.ie/article/79937
Indymedia Ireland is a media collective. We are independent volunteer citizen journalists producing and distributing the authentic voices of the people. Indymedia Ireland is an open news project where anyone can post their own news, comment, videos or photos about Ireland or related matters.