by TJ - Shell to Sea

Now is the time of the droogs and their uber meister, McDowell ! 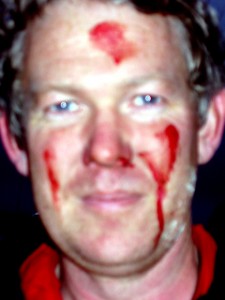 Democracy How Are Ya?

Friday, November 10th was the 11th anniversary of the state murder of Ken Saro Wiwa and 8 other Ogoni activists in Nigeria, at the behest of Shell. The day was chosen by the Shell to Sea campaign as a suitable day of action against Shell's unprecedented attempt to build a high-pressure pipeline across bog-land to a terminal that is sited in a completely unsuitable spot.

The protestors witnessed a quantam leap in Gardai violence against legitimate protest in Rossport. The gardai were caught on camera baton-charging the protestors and throwing one protestor over a fence into a deep ditch. Several injuries were reported and several people were hospitalised. One man was followed into a field by three gardai, pulled to the ground and savagely beaten in front of a dozen witnesses. The state and Shell have embarked on a course of thuggery and intimidation and are clearly set on smashing the protests.

What does it matter if some of the Gardai there were sweet, one of them venturing in a push and counter push heave situation : "international rules are tougher" the day was a baton fest of bastard, Gardai self-evidently enjoying their work.

Two of our group from Galway were gratuitously batoned above the knees, they at least were forensic and accurate in their blows, but the anger , the anger of the day, the feeling of being violated, the spontaneous roars of anger and cries of contempt for MCDowell when we heard this fuck was blaming the "violence" on Sinn Fein when, let it be said, they were practically absent from Bellanaboy this morning.

Maura Harringtons car after the attentions of the Gardai's batons

The spirit of the day

http://www.indymedia.ie/article/79603
Indymedia Ireland is a media collective. We are independent volunteer citizen journalists producing and distributing the authentic voices of the people. Indymedia Ireland is an open news project where anyone can post their own news, comment, videos or photos about Ireland or related matters.