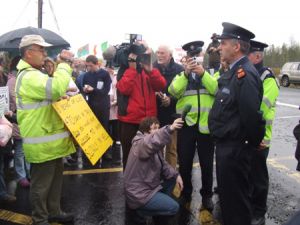 You have ten minutes to move

People power and peaceful resistance effectively completely defeated Shells first concerted effort to break the picket at the refinery site at Bellanaboy this morning. Early signs that a confrontation was imminent were apparent by the dawn arrival of seven carloads of extra security guards who sped into the compound. People on alert began to determinedly gather in front of the gates and banners and placards were distributed in readiness for the long prepared for initial showdown.

At 7.40 a.m., 8 local Gardai and 2 special branch arrived, videoing and viewing the crowd of up to 150 protestors from across the road. Superintendent Joe Gannon approached and addressed the now shoulder-to-shoulder protestors comprising of women, children, men, old and young, who were effectively blocking the gate entrance. He announced the Gardai responsibilities to protecting the protestors from harm and enabling the legal right of people to access their place of work. He informed us that the workers would arrive at 8 a.m. at which time the Gardai intended to facilitate their entrance onto the site. He then gave us 10 minutes to discuss our course of action, in light of the information he had just imparted, and retreated to the line of waiting Gardai. He did not return to collect a verdict on this statement. Nobody moved as people stood resolute. His speech served only to reinforce the word amongst the picket that we were maintaining our right to peaceful protest. It strengthened our resolve and emphasised that peaceful resistance was our objective.

At 8 a.m. the convoy of workers, headed by 2 jeeps containing men in dark glasses, obviously essential for a grey, wet, morning, and 5 minibuses drove at the crowd, barely stopping short of ploughing through the front line of women and children. At this second, an historic, awesome and brave act of non-violent direct action began as the front line women began to say the rosary, accompanied by everybody on the picket line. The initial reaction by the Gardai and the convoy of workers was one of stunned silence, nobody knew what to do, and shocked disbelief was obvious as the prayers that were loudly said witnessed the opposition paralysed. The Gardai huddled in discussions seemed confused as to how to deal with this line of resistance and unclear as how to proceed. The protestors stood in unity, resolute and unmovable in sincere prayer  the seriousness of this mass demonstration of solidarity and sincerity undertaken by all the people cannot be overstated. A brief attempt by the Gardai to infiltrate the crowd appeared half-hearted, and they quickly retreated from this course of action as the praying continued.

Finally, the Superintendent approached the convoy of workers and after a brief discussion the, vehicles were reversed and they all retreated. The stand off had lasted for 20 minutes. At this point, there was no cheering, no levity, in respect for the prayers, which continued for another 10 minutes after their departure.

A long awaited event in the Shell to Sea campaign had finally occurred. This morning was a clear victory for people power employing peaceful resistance, using the respectful application of prayer. It was a major achievement, in winning a further battle in the war being waged against the destructive hell of Shell.

Related Link: http://www.struggle.ws/rsc
http://www.indymedia.ie/article/78631
Indymedia Ireland is a media collective. We are independent volunteer citizen journalists producing and distributing the authentic voices of the people. Indymedia Ireland is an open news project where anyone can post their own news, comment, videos or photos about Ireland or related matters.