Not Guilty. The Pitstop Ploughshares All Acquitted on All Charges 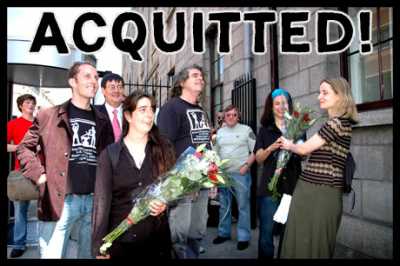 The verdict was given at aproximately 11.50 a.m. this morning at this significant trial in The Four Courts. Since their action on the 3rd February 2003 the five defendants have waited three years for todays verdict, under onerous bail conditions, with two other trials collapsing (Trial 1,Trial 2). In a statement released immediately after the verdict the Pitstop Ploughshares said:

"The jury is the conscience of the community chosen randomly from Irish society. The conscience of the community has spoken. The government has no popular mandate in providing the civilian Shannon airport to service the US war machine in it's illegal invasion and occupation of Iraq.
"In 1996 in Liverpool the Jury acquittal of the four 'ploughshares' women contributed to the end of arms exports to the Suharto dictatorship in Indonesia and the independence of East Timor.
"The decision of this jury should be a message to London, Washington DC and the Dail that Ireland wants no part in waging war on the people of Iraq. Refuelling of US warplanes at Shannon Airport should cease immediately. " - Ciaron, Damien, Karen, Deirdre and Nuin.

Indymedia has seen sterling work reporting this trial which has been ignored by the rest of the Irish media with daily court reports: Day 1, Day 2, Day 3, Day 4, Day 5, Day 6, Day 7, last days and reflections from many participants as well as a photo essay of the verdict day along with a revolt video contribution.

Here Kathy Kelly reflects , on Closing Speeches in Pit Stop Ploughshares Trial, this post also includes the closing statements from the prosecution and defence. The trial has also seen public meetings featuring *Former U.S. Marine Sgt. Jimmy Massey & Kathy Kelly, while within spitting distance of the war-mongers lair (UK Houses Parliament), Brian Haw bore witness to the Ploughshares and there have been solidarity marches too. Indymedia.ie has a pre-Trial discussion with Ciaron about the Ploughshares' action, the upcoming trial and the meaning of resistance in the Era of the 'War on Terror': Faith of Our Fathers: (transcript / .mp3

But, it has to be remembered, that this victory can only be an encouragement which should revitalise the anti-war movement here. As reported by the Shannon Planespotters - CIA Rendition and covert aircraft are still using Shannon airport

You can visit the Peace On Trial website for more information on the CW5 by clicking here.

There will be much emotion and relief for the Pitstop Ploughshares and their supporters at this verdict. I presume the information I have just been given is correct.

http://www.indymedia.ie/article/77460?author_name=W.%20Finnerty.
Indymedia Ireland is a media collective. We are independent volunteer citizen journalists producing and distributing the authentic voices of the people. Indymedia Ireland is an open news project where anyone can post their own news, comment, videos or photos about Ireland or related matters.