Justice Minister McDowell: It seems to be spreading everywhere 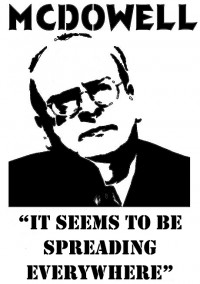 Is the writing on the wall for Grafiti?

If you want to know what is actually occurring inside, underneath, at the center, at any given moment, art is a truer guide than politics, more often than not. - Percy Windham Lewis (1884-1957)

Deputy Gormley also asked why have we seen an upsurge in graffiti throughout Dublin? We cannot afford to underestimate the extent of this problem.

In response to Mr. Gormley, Justice Minister Mr. McDowell (standing in for his colleague the Minister for the Environment, Heritage and Local Government, Deputy Roche) replied, The constituency Deputy Gormley and I share has been under sustained attack in recent times. It seems to be spreading everywhere. He also went on to say Somebody, on doing a little research, should be able to track down where the major sales of spray paint are taking place and to whom it is being sold.

Possession of a spray can could become a criminal offence?

Rewards offered for tip-offs on Taggers. How much is this space worth?

http://www.indymedia.ie/article/76542
Indymedia Ireland is a media collective. We are independent volunteer citizen journalists producing and distributing the authentic voices of the people. Indymedia Ireland is an open news project where anyone can post their own news, comment, videos or photos about Ireland or related matters.